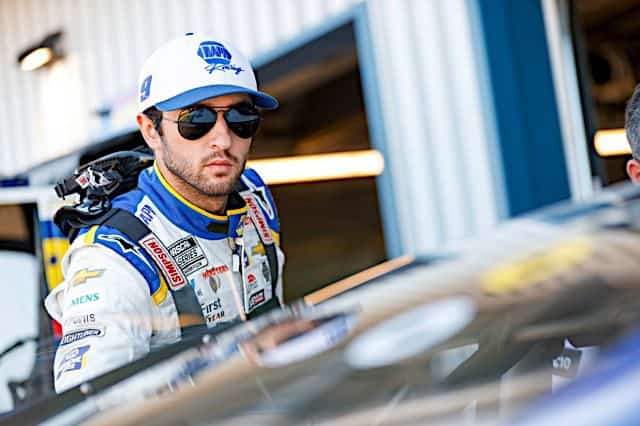 PHOENIX — Not often does a NASCAR driver win consecutive championships. In fact, no one has done it since Jimmie Johnson claimed his fifth title in 2010.

In Thursday’s (Nov. 4) media day availability at the Phoenix Convention Center, the defending champion’s cool, calm, collected demeanor was on display yet again, cruising in from a morning first spent at the Arizona State Capitol.

Elliott’s voice, hoarse and scratchy from cheering his Atlanta Braves earlier this week en route to their first championship in his lifetime, exudes subtle confidence.

It comes with good reason.

That might raise some eyebrows considering the season Elliott has had. His two wins are tied with Denny Hamlin for the fewest wins of this year’s Championship 4 drivers, and neither came on an oval.

But Elliott has executed as steady a playoff run as any Cup driver can hope for. His lone moments of concern came at Bristol Motor Speedway, where a fight for the win with Kevin Harvick resulted in a flattened tire and a 24th-place finish, and the Charlotte Motor Speedway ROVAL, where Harvick paid back Elliott for his handling of the situation … and still wound up eliminated.

Elliott, who had enough points by the end of stage two at Martinsville Speedway to lock into the championship round, remains unfazed, almost refusing to acknowledge the potential pressure of the moment.

“I feel really good, and I feel like our team is very laid back and ready to go try to perform at a high level,” Elliott said. “That’s going to be what rewards you the most.

“Again, if it’s not going to make us go faster we don’t care about it right now.”

Sure, that’s his personality in a nutshell — never notably worked up one way or another. But there is a looming sense of the sport’s most popular driver truly finding peace in the person and the competitor that he is.

It helps, of course, that he’s been there and done that. Last year marked his first appearance in NASCAR’s final four and he won the title match convincingly — even after starting from the rear of the field. As of now, Elliott is the lone driver to win a championship race at Phoenix.

The sense of comfort he carries into the 2021 season finale stems from lessons learned on last year’s path.

“I think it’s just more going through the motions last year and just learning, I think, more about ourselves through that experience than it is anything else,” Elliott said. “You know, we didn’t have any experience with it last year and we were able to put our heads down and get the job done. So hopefully we’re even more prepared now and we can go and do it again.”

The odds don’t heavily swing in the No. 9 team’s favor. His Hendrick Motorsports teammate Kyle Larson has dominated the season with nine victories and said Thursday he feels like he has “probably a better shot here at Phoenix than I would have at Homestead.” Hamlin is the sport’s next-best driver this year and unquestionably one of the best period. Martin Truex Jr. enters as the most recent race winner at Phoenix.

None of that matters to Elliott, who has become a beacon of composure after many trying moments in the early days of his Cup Series career.

”It’s hard to believe it was a year ago already. It’s kind of nuts to me,” Elliott said. “But the great news is we don’t just have to come and enjoy it and be done with it. We have another opportunity to try to do it again. That’s where my head’s at and that’s where our team’s at, just thinking about that and try and execute a really, really solid weekend.”

Don’t confuse Elliott’s poise for a lack of passion. There’s a reason he was so heated after he felt Harvick cost him the win at Bristol. He wants to win and he wants his competition to know that.

But is it championship or bust?

“I mean, that’s my goal, for sure,” Elliott said. “Anything short of that, we didn’t accomplish our goals, is how I view it. I mean we want to go and win races and battle and win a championship every year. That’s what we set out to do when we leave for Daytona. So I don’t think that’s different for anybody.”

A second championship at age 25 would propel Elliott’s legacy into elite status, setting his career on a path toward extraordinarily high ceilings.

The driver is confident he can achieve that goal on Sunday. Friday’s lone practice session of the weekend found the No. 9 Chevrolet fifth fastest in single-lap speed and third quickest in best 10-lap averages.

Whether the team can transform Elliott’s confidence and encouraging start to the weekend into a 2021 championship remains to be seen.