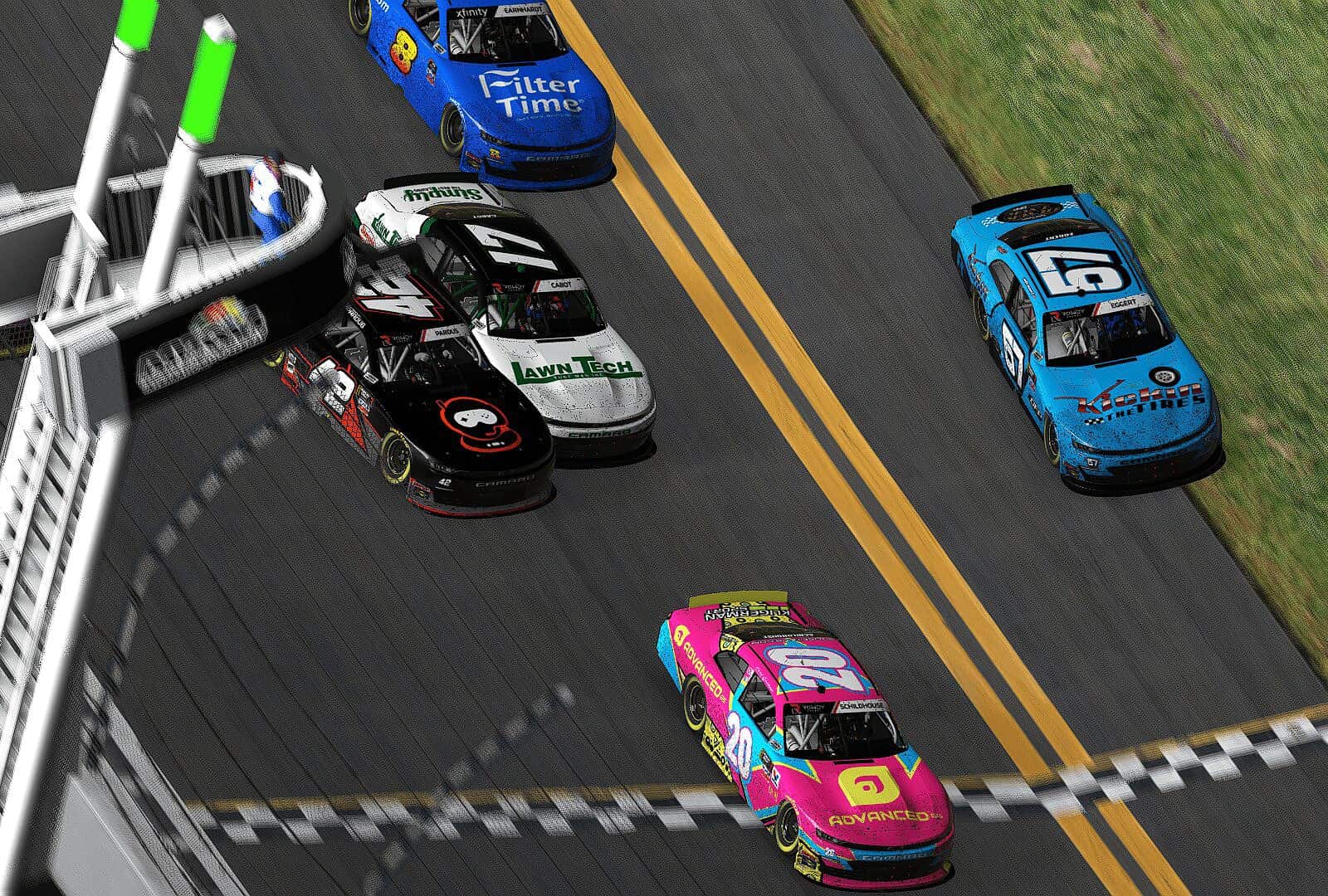 The roundup is back and there is a ton of racing to cover with the return of two of the big ones, Monday Night Racing and the next rung of the Road to Pro ladder, the eNASCAR Contender iRacing Series.

Matt Stallknecht, Rajah Caruth, Adam Cabot, Gary Sexton and Collin Fern also found their way to the top of the leaderboard throughout the event, but it would be an overtime restart to decide the winner. Schildhouse took back the lead just before the caution and was able to hold off Seth Eggert at the line for the win.

Schildhouse finds himself atop the standings and locked into the playoffs should he meet the start and points requirement through the season. Series rookie Earnhardt Jr. collected a respectable sixth-place finish while Busch was wrecked, finishing 25th.

Frontstretch Motorsports drivers Michael Massie, Garrett Miller and Drew Welker all had disappointing finishes after being collected in multiple incidents towards the end, finishing 32nd, 36th and 37th respectively. As for myself, I was able to push Busch across the line and finish 26th.

The top 23 from the Qualifying Series and 17 of the Bottom 20 from the 2021 eNASCAR Coca-Cola iRacing Series combined on Tuesday night for the last chance to make the 2022 Coke Series roster. Three drivers from the Coke Series – Nathan Lyon, John Gorlinsky and Caine Cook – all decided to retire and not pursue another season at the top level of eNASCAR sim racing.

Nick Shelton took the pole position for the first of seven races in the Contender Series having qualified back in via the Qualifying Series a few weeks ago. Shelton was dominant, leading pretty much every lap throughout the event. On the final restart, however, Shelton finally got a challenge from Kaden Honeycutt for the lead. The two made contact, forcing Shelton further back, and allowing Parker Retzlaff to capitalize.

Retzlaff went on to take the first round while Shelton fell back to finish 12th. Honeycutt held on to a third-place finish while Garrett Lowe snuck into a runner-up spot.

With just one race in the books, many drivers like Ashton Crowder, Donovan Strauss, Jordy Lopez Jr. and Kyle Peddle will be looking to rebound at Auto Club Speedway. All four showed promise for most of the race but fell back towards the end due to rough racing from themselves and others. There will be one drop allowed in this series, and hopefully for all of these drivers, Phoenix will be it.

The Phoenix finale will take place on Saturday night and a champion will be crowned before this roundup is posted. Regardless, the Round of 8 took place since the last roundup was posted, setting the stage for their Championship 4.

To kick off the Round of 8, the 100% Cup Series went down to Texas to start the setting of the Championship 4. After 32 weeks, for some of the bottom drivers after the reset, a win would be almost necessary to advance onward.

Bryson Hixenbaugh, the third seed by playoff points, took the pole position for the evening, but he wasn’t on top for long. At the end of the first stage, top-seeded Jon Dulaney was on top and took on 10 more points toward his title hopes. The second stage went to Adam Benefiel, the second playoff seed entering the event. After a dominating performance, with 192 laps led, Benefiel locked down his Championship 4 spot before anyone else with a Texas win.

The second round pinned seven drivers against one another for three more spots remaining in the Championship 4. Playoff fifth seed Jason Taylor took the pole position, but was out of contention early on at Kansas. Sixth seed Brandon Pierce, who was nearly a full race out on points, picked up max points in the first stage with a stage victory.

From there, it became Dulaney’s world. The top-seeded driver led a race-high 162 laps, won the second stage, and clinched his place in the championship race when it was all said and over with.

The last chance to advance came down to 500 laps at Martinsville. Hixenbaugh entered as the top seed not yet locked in, 41 points above the cutline. Cam Stone held the final spot, 26 points ahead of Sean O’Brien Jr., the first driver out. While O’Brien and Pierce both had an outside chance of advancing via points, a win would likely be their best ticket, and the only option for the bottom two, Taylor and Demarius Hickenbottom.

Stone started off the night with the pole position and ran a near perfect race. After winning both stages, unless there was a new winner below him in the standings, he and Hixenbaugh were guaranteed to advance forward to the Championship 4. Eventually, Dulaney was able to get by and take the lead as he went on to win his season-high 12th race of the season.

Dulaney, Benefiel, Hixenbaugh and Stone will now race for a championship on Saturday night. Arguably the four best over the entire season, it will be interesting to see who comes out on top after a full-length feature at the new Phoenix Raceway. Tune into the finale on Saturday night at 8:30 p.m. ET.

With two races to go in the 2021 season, the FTF Cup Series has a Martinsville date on Sunday to decide the Championship 4. It’s been three weeks since the last roundup, so the Round of 12 was decided and the Round of 8 has clinched two drivers in the title race at Phoenix.

Wrapping up the Round of 12, a bit of a curveball was added into the fray after a possible glitch with the NASCAR Chevrolet Cup car. Drivers were warned they might hit bumps harder with the Camaro and were given the chance to switch to a Ford or Toyota if they desired.

Two drivers that did not, Kevin King and Oisin Walsh, were still fast in their Chevy rides, but King found out about the bumps early in the event. After missing the first turn and slamming the wall Kevin Harvick-style, King tried to get back up to speed out of the racing line. Unfortunately, some turtles were in his path and his virtual car basically exploded, collecting multiple cars in the melee.

Walsh, on the other hand, avoided the curbs and kept his Chevy clean. While Brian Mercurio dominated the majority of the race, it was Walsh claiming his first career FTF victory with a Roval victory. Ryan Doucette, Chris Wetz, Gary Watterworth and Evan Rice were all eliminated from the playoffs.

Do you call him Oisín or Dave Walsh?

Either way, this mans took a broke af car and won anyway at the Roval tonight. pic.twitter.com/0L6ZZ0pDzV

The first race of the Round of 8 took drivers to Kansas instead of Texas first. Why? Well, because the admins goofed up the schedule. Anyway, Kansas kicked things off and Garrett Konrath led the field to the green. Michael Guest, who was eliminated in the Round of 16, made his return to the series and won stage one.

Unfortunately, early wrecks and tons of damaged cars shook up the running order for the second stage. Tyler Garey took control and never looked back, winning stage two. He went on to win his first race of the season, locking his place in the Championship 4.

Texas on Halloween was a frightening feature for some. Championship contenders such as Konrath, Mercurio and Brandon Hawkin found trouble early on, hurting their chances at advancing to the Championship 4 with not having a win. Konrath wasn’t as hurt and finished on the lead lap, but Mercurio and Hawkin both limped home to finish multiple laps down.

It didn’t help that one of the drivers below the cut absolutely dominated on Sunday night. It was the last Car of Tomorrow race of the season at the old version of Texas and Blake Reynolds was near untouchable. Reynolds had a tough start to the round at Kansas, but bounced back big, winning all the stages and taking the checkered flag, a season-high fifth victory over the rest of the field.

With only one race to decide the Championship 4’s remaining two spots, the series heads to Martinsville where Konrath won earlier in the season. Konrath, Mercurio, Kolonics and Hawkin are all below the cutline while King and Michael P. Frisch sit above, both with a 12-point advantage. Tune in to BottomSplit on Sunday night to see how it plays out.

The Road To Pro ladder continues with the second race of the eNASCAR Contender iRacing Series at Auto Club Speedway on Tuesday night. That broadcast will start at 9 p.m. ET over on iRacing or on Podium 2.

FTF Racing heads to Martinsville Speedway for the last race in the Round of 8 on Sunday night, live at 8 p.m. ET on BottomSplit.

Finally, a new series, S-ROC, will be taking the old NASCAR stock cars on tour with some of the best to ever do it. S-ROC takes past champions, winners, and big names in iRacing past and present in the 2013 NASCAR Cup Series Chevrolet SS for eight races starting in December. The races will be on Wednesdays on Podium eSports. More details to come on that soon.