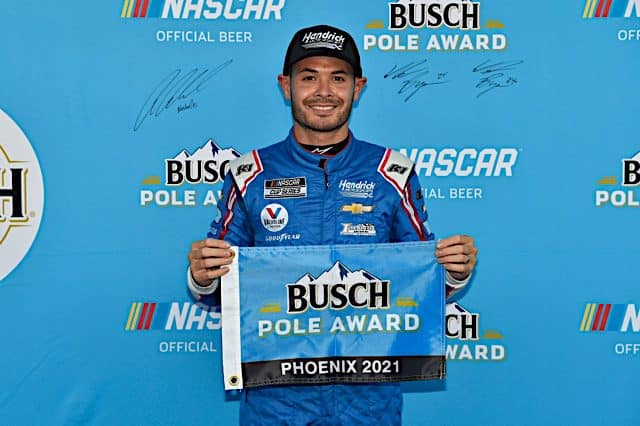 Kyle Larson laid down a 137.847 mph lap and will lead the field to the green flag in Sunday’s NASCAR Cup Series Championship Race at Phoenix Raceway. Fellow Championship 4 driver Chase Elliott will start alongside on the front row in his bid to win back-to-back championships. William Byron starts third, while Ryan Blaney and Kurt Busch round out the top five.

"He blows 'em out of the water!" @KyleLarsonRacin puts down an incredible lap to secure the #BuschPole for Sunday! #Championship4 pic.twitter.com/6aBjHuLz1P

“It was nice to go out second to last and have a benchmark to shoot for,” Larson said after qualifying. “Chase (Elliott) got his tires in the resin so I decided to try it.”

Elliott is the only driver whose car made it through inspection on the first try. Car chiefs Brandon Griffith (Hamlin), Jesse Saunders (Larson) and Blake Harris (Truex) were ejected, and all three cars passed on their third pass through.

Coverage of Sunday’s championship race will begin at 3 p.m. ET on NBC and streaming on Peacock.

Larson really pays attention to all the other cars. He said that when he passed Harvick for the win recently. Wonder if Denny is throwing up yet :)

Another rigged race for hendrick to win. Nascar has become a total joke. Why Qualifieng for this race? Didn’t have it all year. Why did the 4 in the chase start 1,m2,3,4 ? To hell with Nascar.