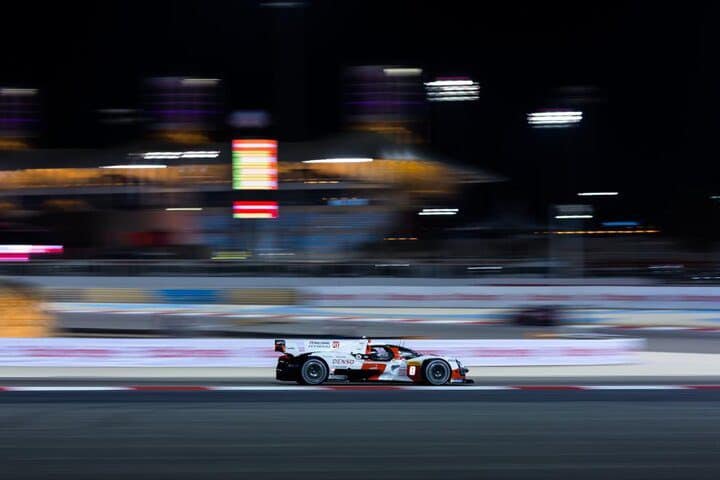 Toyota GAZOO Racing’s No. 8 Toyota GR010 of Sebastien Buemi, Brendon Hartley and Kazuki Nakajima claimed victory Saturday (Nov. 6) in the Bapco 8 Hours of Bahrain, the season finale of the 2021 FIA World Endurance Championship.  It is the No. 8 team’s third overall win of the year and the ninth straight overall victory for Toyota in the WEC.  The team’s last defeat was at the Lonestar Le Mans at Circuit of the Americas, 21 months ago.

“It was a beautiful end [to the season],” Nakajima said after the race.  “It was a tough race for us, but this week, we definitely had more pace [compared to last week].  All of the team members did a great job and I am really happy to be a part of this team.”

For Nakajima, Saturday was his final race with Toyota GAZOO Racing as he will step away from the WEC after the season.  He is not necessarily retiring, but has no official plans announced for 2022.

Mike Conway started from pole in the No. 7 Toyota, but it was the Signatech Alpine A480-Gibson of Nicolas Lapierre that got a strong run heading into turn 1 on the first lap.  He was able to dispatch of Buemi in turn 2, then got past Conway exiting the chicane to take the overall lead.  The Alpine was not quite on the pace of the Toyotas, but was able to hold onto the top spot for the first 15 minutes of the race.

On lap 9, Conway was able to retake the lead exiting turn 10.  Buemi was able to follow past a lap later.  From that point onwards, the Toyotas led to the finish.  Any chance that Signatech Alpine had at victory ended 45 minutes in when Lapierre found a number of neutral gears in his gearbox.  That led to a brief stay in the garage that put the team three laps down, a margin they could never make up.

Conway and Buemi jointly pulled away from the field until the first round of stops.  Conway maintained the lead after that round began, but Buemi started to put pressure on his teammate.  On lap 44 (82 minutes in), Buemi pounced and took the overall lead.  This pass turned out to be the one for the win.

Buemi, Hartley and Nakajima were able to pull out a decent advantage for the rest of the race before managing that gap late.  Despite slowing their pace, the No. 8 Toyota was under no threat from any challengers at the end of the event.

The margin of victory was 7.351 seconds over Conway, Kamui Kobayashi and Jose Maria Lopez.  Signatech Alpine’s Lapierre, Andre Negrao and Matthieu Vaxiviere ended up six laps down in third.

LMP2 saw United Autosports’ Phil Hanson start on the pole, but his advantage was very short-lived as Racing Team Nederland’s Giedo van der Garde took the lead on the first lap.  However, Racing Team Nederland is a Pro-Am team.  Team owner/driver Frits van Eerd is not quite as quick as his teammates.  While Van der Garde pulled out a 45-second lead early in the race, the team gave it back once van Eerd hopped in the car.

Racing Team Nederland still held the class lead after van Eerd gave way to Job van Uitert in the third hour.  However, Team WRT’s Charles Milesi was on a charge.  Milesi ran down van Uitert and passed him for the class lead just shy of the three-hour mark.

Once in front, Milesi quickly pulled away from the rest of the pack.  Teammates Ferdinand Habsburg and Robin Frijns had no worries on route to their third consecutive class victory.  The win also gave the trio the LMP2 championship in Team WRT’s first year in the WEC.

The GTE-Pro class came down to a final duel between Porsche GT Team’s Michael Christensen and AF Corse’s Alessandro Pier Guidi.  The two ran nose to tail as the quickest of the LMP2 teams came charging through.

Trouble struck with 12 minutes to go as Christensen had to brake early to let Albuquerque through.  Pier Guidi proceeded to run in the back of Christensen, spinning the Porsche out in turn 14.

Car-wise, Christensen’s car ended up with rear diffuser damage and flat-spotted tires.  Meanwhile, the contact resulted in the hood coming loose on Pier Guidi’s car.  Instead of issuing a drive-through penalty to Pier Guidi for avoidable contact, race director Eduardo Freitas required Pier Guidi to give the position back to Christensen.

Both teams then pitted for a splash of fuel.  Around the time Christensen pitted, the requirement to give the spot back was rescinded.

Pier Guidi beat Christensen out of the pits and held on to take the GTE-Pro class victory and the GTE-Pro championship on the road.  Displeasure with the result continued after the race.  Christensen’s co-driver Neel Jani interrupted the winners’ interview with angry remarks and a request that involved his hindquarters.  All three of the drivers in the No. 92 left the podium after the Italian national anthem was played and refused to spray the champagne on the podium.

The final margin of victory was 3.249 seconds over Christensen, Jani and Kevin Estre.  Miguel Molina and Daniel Serra in the No. 52 Ferrari were third.  However, there is likely going to be a protest from Porsche over the penalty being rescinded.

In GTE-Am, the championship came down to TF Sport and AF Corse’s No. 83 Ferrari.  That battle effectively came to an end on the first lap of the race.  TF Sport’s Ben Keating had contact with Aston Martin Racing’s Paul Dalla Lana.  The contact cut Keating’s left front tire and Dalla Lana’s right rear tire, although neither driver spun.  Both were forced to make unscheduled stops, though.

While Keating was able to resume without losing too much time, a later collision with Spirit of Race’s Thomas Flohr broke part of the suspension.  That put the team in the garage for 90 minutes.  Ultimately, they retired in the seventh hour, ending the season with a non-classified finish.

With TF Sport out of the way, the championship was a cakewalk for AF Corse’s Nicklas Nielsen, Francois Perrodo and Alessio Rovera.  The race itself was less so as Cetilar Racing and Team Project 1 both remained in striking distance, racing them hard.

Ultimately, AF Corse took the class lead for good with just under two hours to go.  From there, they pulled away to take their fourth win of the year.  Due to the placement of the leaders, the margin of victory was a full lap over Dempsey-Proton Racing’s Matt Campbell, Jaxon Evans and Christian Ried (they were nearly a minute behind AF Corse when they took the checkered flag.)