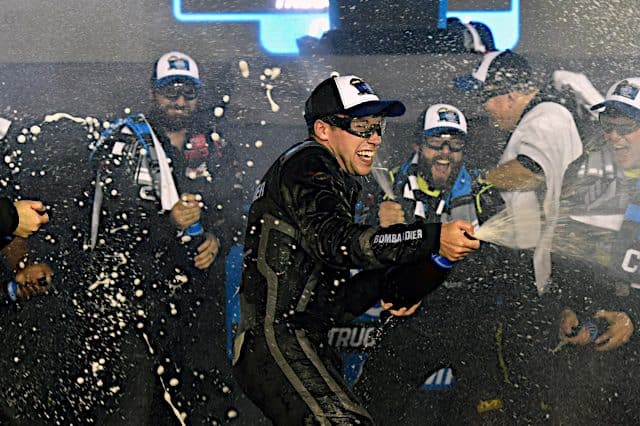 In a Nutshell: Chandler Smith scored his second career NASCAR Camping World Truck Series win in Friday night’s (Nov. 5) Lucas Oil 150 at Phoenix Raceway. The rookie led five times for 39 laps, including the final 18 for his second victory in five races, just one week after being eliminated from the championship battle. Stewart Friesen finished second, followed by Ben Rhodes, who was the highest Championship 4 driver and won his first title. Sheldon Creed and Zane Smith rounded out the top five.

After starting on the front row alongside pole sitter and eventual winner Chandler Smith, Creed almost immediately took the lead and paced the field for 33 of the first 34 laps before giving up the top spot to Smith, who led until everyone pitted under the stage break. Once again, Creed snuck up front for 40-plus laps before he once again fell into Smith’s clutches.

Although Friesen led the field off pit road under the stage two break, Creed took the lead almost immediately after the restart and held onto it until Smith took over for the fifth and final time with just 18 laps remaining.

All told, Creed led six times for a race-high 106 of 150 laps and had plenty of speed to maintain the top spot on shorter runs. However, he couldn’t close the deal on one final victory with GMS Racing before he moves on to the NASCAR Xfinity Series and Richard Childress Racing in 2022.

He talks about a 4th place finish and racing a #Championship4 driver that his teammate is trying to catch. #NASCAR pic.twitter.com/Ol4nA2jZsV

When the checkered flag flew and the dust settled over the season finale at Phoenix Raceway, Ben Rhodes emerged with his first career Truck Series championship. It was the fourth driver’s championship for ThorSport Racing and the first owner’s title for the organization, beating out GMS Racing and Kyle Busch Motorsports.

ThorSport teammates Rhodes and Matt Crafton were the only two of the Championship 4 to start inside the top 10 in fourth and fifth, respectively, while Zane Smith and John Hunter Nemechek started 13th and 16th. Smith and Crafton struggled with the handling of their trucks for much of the race while Nemechek ran into misfortune early on, suffering contact on lap 1 that ultimately led to a flat tire and a green flag pit stop that put him two laps down.

A yellow shortly after that stop allowed Nemechek to get one of those laps back through the free pass. However, Nemechek remained one lap down for the remainder of stage one and all of stage two before a stall by Tate Fogleman with 48 laps remaining put him back on the lead lap, giving the No. 4 team hope to make a run through the field and at the title. Track position wasn’t in Nemechek’s favor, though, and while he raced up to an eventual seventh-place finish, the impressive recovery wasn’t enough to win the championship.

Meanwhile, Smith tried to make the championship battle a little more interesting with 41 laps remaining. All of a sudden, it appeared his truck started handling better and he was able to chase down Rhodes and pass him, giving Smith the edge.

A MOVE THAT COULD WIN HIM THE TITLE! @zanesmith77 is now your highest running #Championship4 driver! pic.twitter.com/5rSryDr3Ia

It took until inside 10 laps remaining before Rhodes was once again able to catch Smith, give him a little tap in the back bumper and take the top spot in the title race away.

Rhodes held on and never looked back. Smith ended up second in the standings, followed by Nemechek and Crafton.

If you didn’t get to catch it live on Twitter, do yourself a favor and go watch Rhodes’ press conference. You won’t be disappointed.

When Grant Enfinger began the 2021 season, he didn’t have enough funding to run full-time behind the wheel of the No. 98 ThorSport Racing Toyota, despite having made the Championship 4 in 2020. Instead, he was forced to share the ride with sophomore driver Christian Eckes. But after driving the truck in the season opener at Daytona International Speedway before sitting on the sidelines for the Daytona road course, the Truck Series veteran knew he couldn’t spend a large chunk of this season sitting on the sidelines.

Enter Camping World CEO Marcus Lemonis and Rohrbaugh Racing. A partnership between the two earlier this season put Enfinger behind the wheel for what turned out to be nine races this season. It all started at Las Vegas Motor Speedway in a race where a total of 10 trucks carried Camping World colors. The financial backing came with an extra bonus incentive to go along with it for finishes inside the top five, 10 or 15.

In 21 races this season, Enfinger didn’t end up making it to victory lane, though he did score six top fives and 11 top 10s, including a second-place finish at Bristol Motor Speedway a few weeks ago. And staying on the track, as much as possible, paid off over the long-term. Next season, he’ll join GMS Racing to run one of its trucks full-time.

Can’t say thank you enough to Codie, Larry, and all these guys for the opportunity to wheel the #9 this year. This season was quite the roller coaster, but I sure had a lot of fun with these guys. pic.twitter.com/nYV8kWESMV

Rookie of the Race: Chandler Smith

Rookie of the Year: Chandler Smith

Points Report: Rhodes won the championship, followed by Zane Smith. John Hunter Nemechek was third and Crafton finished fourth out of the Championship 4 drivers. Creed led the remainder of the playoff drivers with a 50-point cushion over Friesen, who ended up sixth. Todd Gilliland was seventh, followed by Chandler Smith. Austin Hill and Carson Hocevar rounded out the top 10.

Capped it off with a bow ? pic.twitter.com/uaCHfA476g

A championship = A 'Shoey'

So sorry to everyone. Don’t know what else I could of done different tried everything to hold on. 8 laps short of a championship. P2 thank you @GMSRacingLLC & @TeamChevy for the opportunity. Keep fighting??

P6 @phoenixraceway. Missed it some tonight, but still had a solid @CurbRecords Tundra. Really happy for @benrhodes, Duke/ Rhonda, and all of @ThorSportRacing! Proud to be a part of it all. #StillStanding

Thank you @NieceMotorsport. We did a lot with a little this year, and proved that myself and this whole organization can run upfront and be contenders.

One teams. One goal. One family. pic.twitter.com/RneF6D7D6q

John Hunter Nemechek’s chances for a title seemed to end early, but the KBM No. 4 team rallied its hardest — all the way to P7.

In all, it wasn’t enough. #NASCAR pic.twitter.com/QgrW4NyJYf

Matt Crafton never seemed to have the truck to compete tonight. He said Thursday short-run speed would be key. We had a lot of long runs tonight.

Drunk @benrhodes was entertaining, but don’t get it twisted: he proved why he was one of the best this season.@DaveyCenter and @zachstur break down the @NASCAR_Trucks title race from @phoenixraceway and Rhodes’ first career #NASCAR title work ThorSport. pic.twitter.com/nlDQjd591G