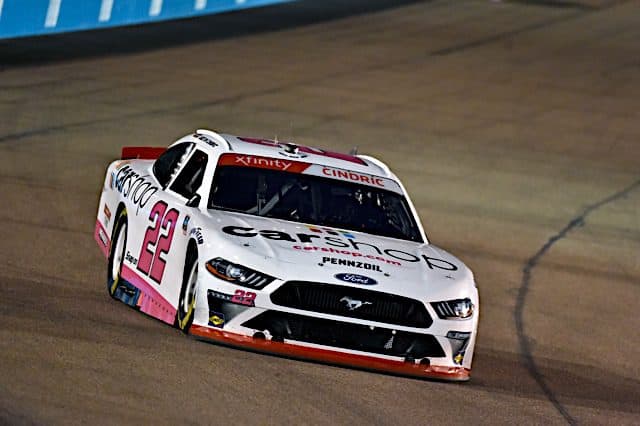 PHOENIX — A second consecutive championship was on the line for Austin Cindric. He fell inches short.

A bump-and-run from perennial runner-up Daniel Hemric in the final set of corners left Cindric 0.03 seconds from the 2021 NASCAR Xfinity Series title at Phoenix Raceway on Saturday night (Nov. 6).

The contact came coming to the checkered flag on an overtime restart to define the season’s title bout. Cindric was “pissed” he was moved but said it was fair game.

“In Daniel’s shoes, that’s his moment. That’s his shot,” Cindric said. “And I don’t think it was by any means outlandish or dirty. I’ve seen worse from this guy,” motioning to AJ Allmendinger to his left on the stage of the media center.

After some light-hearted ribbing between two of the championship runners-up, Cindric summarized the last-lap incident bluntly.

The caution flag that brought the onset of overtime was one of a trio of late cautions. The first was triggered with 19 laps to go when Allmendinger spun in turn 2 due to a loose right-rear wheel. Allmendinger, the regular-season title winner, was apologetic to Cindric because the yellow erased a healthy lead for him in the midst of a 41-lap green-flag run.

“I was literally about to come down, turn in, go to pit road, felt like there was nothing on the right rear and I spun out,” Allmendinger said. “I don’t want to be the storyline like that, especially when he’s got a lead and deserving to probably go win another [title]. At that point, you don’t know if a caution is going to come out anyway. I had nothing to gain. I just didn’t want to be a part of the storyline.

“It wasn’t on purpose. At the end of the day, that’s not what I wanted to happen. It deserved to play out however it was supposed to play out. That’s why I apologized. It pissed me off because we had no lug nuts on the right rear, about to fall off. Pissed me off that it caused a yellow that I didn’t want to have happen. It didn’t help me and it cost him a headache.”

Those late cautions forced Cindric to master restarts when they mattered most, particularly emphasizing the launch. The top lane proved to be dominant all night thanks to the resin applied to the outside groove of the racetrack.

Cindric proved early that the inside row could compete for the lead even despite the grip deficit. The decision to test that is one Cindric seemed to grapple with in the aftermath.

“I feel like I may have pioneered a little bit too soon as far as how powerful the bottom can still be on restarts,” he lamented. “I felt like it was important to do that, to get the track position. Still worked out. Obviously just didn’t have enough of a margin entering turn 3 on the last lap.”

Saturday marked Cindric’s swan song in the Xfinity Series. The 2020 champion will step into Team Penske’s flagship No. 2 Ford for the 2022 NASCAR Cup Series season, leaving behind the 13-win, title-earning career he established in the sport’s second-tier series.

“I’m certainly going to miss it,” Cindric said. “I think I’ve made a good home as far as not just the people on my race team, but the people in the garage area. The reason why I feel that way is because I went from in 2018 to being probably the guy that everyone stared at and kind of tried to figure out why I was there — in some cases, I probably agree with you. In some cases, I feel like I came to the series probably a year too early. That’s racing. You can’t choose your opportunities when they happen.

“I’ve probably developed and grown more and gained more respect probably coming from that point to obviously where I’m at now.”

See also
Noah Gragson Falls Short at Phoenix: 'We just missed it as a whole'

As the 2021 season concludes, plans for Team Penske’s Xfinity Series program remain in flux. No announcement has been made whether it will compete in the 2022 campaign, but the team does leave Phoenix with the 2021 owners’ championship.

The culmination of all that left Cindric, son of team president Tim Cindric, reflective of what that particular program has brought to the whole of Team Penske’s NASCAR organization.

As the driver, that development launches Cindric into a full-time Cup opportunity next season.

But in the immediate future, his offseason begins with a bitter runner-up result, ever-so-close on the final lap of his final full-time NXS season.

Cindric seems level-headed and focused. So he barely missed out on a second Xfinity championship… I think this year has helped him be a little more prepared for his first season in Cup next year. He should be the overwhelming favorite for ROTY.

He deserved to win last night. I was impressed with how he handled himself when he didn’t.