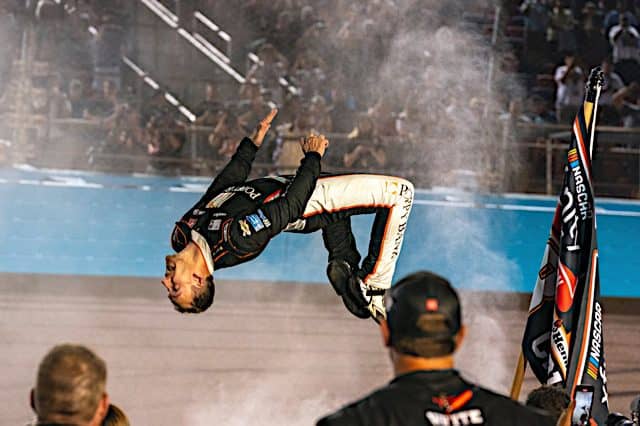 The cause: Daniel Hemric slamming doors with Austin Cindric and beating him to the checkered flag and the win.

After 208 attempts – including 120 in Xfinity and 10 runner-up finishes – Hemric was now a NASCAR national series winner.

After three appearances in the Championship 4, he was a NASCAR champion.

Crew members, friends and family swarmed around the pit box. Yelling, hugging, high-fiving. The things you do when it finally happens.

One crew member handed another a giant championship flag on a pole. As he walked toward the frontstretch, others called after him with a reminder of who it was intended for.

“Driver! Driver! To the driver!”

Following a brief lull Hemric’s orange Toyota, its right side battered from Cindric’s left, reappeared out of turn 4 and drove toward his crew members standing by the inside wall. One team official stood on a wall, his hands on his head in something resembling disbelief and wonder.

The 18 pit box the moment after Hemric won. #NASCAR pic.twitter.com/UvfRFy3czI

With the flag in possession, Hemric began a burnout that had been in waiting since an Oct. 26, 2013 Camping World Truck Series race at Martinsville Speedway. One that never came in tenures with NTS Motorsports, Brad Keselowski Racing, JR Motorsports or Richard Childress Racing, which included NASCAR Cup Series Rookie of the Year honors in 2019.

When the burnout finally stopped, the car was swarmed. With steam shooting from the engine, Hemric eventually climbed on the driver’s door, waving his flag.

An official got the attention of someone holding a video camera.

“The backflip! He’s going to do a backflip!”

Like Carl Edwards before him, it’s Hemric’s winning tradition.

His helmet off, Hemric briefly stepped on the car’s roof, motioned to the crowd partially obscured in smoke and launched.

“How about those race fans?” Hemric said to NBC upon re-entry. “That backflip good enough for you? I’ve been waiting a long damn time to do that.”

It had been six years, in fact, since he won the All-American 400 at Nashville Fairgrounds Speedway.

“Without a doubt, that was the biggest win of my life because I didn’t know what was next in life,” Hemric recalled later. “I’ve gotten that question a lot leading into the championship weekend. ‘Man, can you do it still?’

“I said to everybody, Toyota has whipped me into shape this year. They have an incredible training program. I’ve busted many out in their gym throughout the years. I was more than prepared for that moment.”

Back in the immediate aftermath of the backflip, he observed that he’d “take all the heartbreaks again to live this right here.”

Included in the swarm around Hemric were those who had seen some of those heartbreaks.

One of them, wearing a firesuit for RCR’s No. 2 team, only made a cameo appearance.

When Hemric was 14, his mother and stepfather were service writers at a car dealership in the Charlotte, N.C. area. They had hit a financial wall when it came to supporting his racing career.

Tim Ladyga, a long-time NASCAR crew member and supporter of Hemric, stepped in. He sold his own 1999 Ford Mustang GT and used the money to buy Hemric a Legend car. He effectively became Hemric’s team owner and kept his career alive. Years later, Ladyga was on Hemric’s team when he made the Xfinity Championship 4 in 2017 and 2018 with RCR, coming up short.

“Pretty big,” Ladyga told Frontstretch as the celebration unfolded behind him. “I’ve just been waiting. It’s tough, not seeing him win. Now he’s a winner and a champion, all in one night.”

When Hemric crossed the finish line, for Ladyga it was like “all the pressure was off.”

His words to Hemric?

For Hemric, “it was so special” to see Ladyga’s familiar face in the jubilation.

Racing for Ladyga was the first time Hemric “realized the work that really had to go in. It was all on my shoulders to figure this out.

“It took guys like Tim Ladyga, to be able to share that moment with him out there on the start/finish line … It was cool to feel all that come full circle,” he said. “It’s validation that he was telling people what he believed in me, for me to go show people what he saw in me, that’s validation for myself and I think for him.”

Also present in the celebration was Jay Pennell. A former NASCAR journalist (and one-time Frontstretch reporter), Pennell was Hemric’s PR rep for all three of his years at Richard Childress Racing. That included the two failed Championship 4 trips and his lone Cup season before having to return to the Xfinity Series.

“Incredible,” a teary-eyed Pennell said. “I know how hard he works. I knew he could quit. But he didn’t. He’s a kid from Kannapolis (North Carolina) who had nothing. Now here he is, the top of the world.”

What kept Hemric going through all those ups and downs? The near misses and lost rides?

“You throw in the family element, got to provide for them. This is what I know to do. I got people willing to have my back, push me to be a better person today than I was yesterday.

“Yeah, I’m going to keep this going. It’s because of those people that we’re standing here tonight.”

When I first met @DanielHemric & learned I would be doing his PR at @RCRracing it was clear he’d be a @NASCAR star. Being so close so many times, it was tough to part ways knowing we never won. Watching him earn his 1st #nascar win & become the @XfinityRacing champion was surreal pic.twitter.com/sT1MHkR3S8

As I understand it, Hemric got fired or quit this championship car ride, because he is not coming back to JGR. How come that isn’t brought up like his 10 race runner up record? Who wins a championship and quits or gets fired. Brett Moffit in the Truck series as I recall.