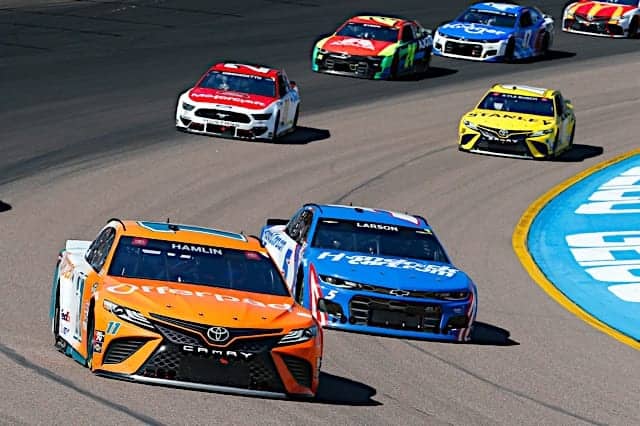 Time for the final race of the season. Time for four NASCAR Cup Series drivers to go head-to-head at Phoenix Raceway’s second championship finale, racing 312 laps in the desert on Sunday (Nov. 7). And, of course, time to crown the 2021 Cup Series champion once the checkered flag falls near sunset in Arizona.

Kyle Larson, Denny Hamlin, Chase Elliott and Martin Truex Jr. all advanced to the Championship 4 from the Round of 8, which concluded last Sunday (Oct. 31) on Halloween at Martinsville. The highest finisher at Phoenix will claim the championship.

Qualifying was held for what seemed like the first time in ages, with Larson recording a lap of just over 26 seconds to claim the top spot. Elliott will roll off second, while Hamlin qualified sixth and Truex 12th.

However, Larson, Hamlin and Truex all failed inspection twice while Elliott passed on his first time through. All three were tagged with body issues each time through and had their car chiefs ejected prior to the race.

Had any of the trio failed again, they would’ve lost their starting spot and had to complete a pass-through penalty when the green flag dropped.

NASCAR ejected the car chiefs of Larson (Jesse Saunders), Hamlin (Brandon Griffith) and Truex (Blake Harris) for failing tech twice. They all passed on third time and will post a qualifying lap and start where they qualify.

As for their pasts at Phoenix, Larson is the only driver of the Championship 4 without a win in the desert. His best finish there is second, which came in 2017, and a win Sunday afternoon would be his first at the track. It would also mean the No. 5 secures double-digit victories in 2021, the first time that’s happened in Cup since Jimmie Johnson (2007). Larson finished seventh at Phoenix in the spring.

Truex, meanwhile, won the race there in March, leading 64 circuits. Elliott is the defending winner of the fall race, clinching the 2020 title with his victory there last November, and is riding a streak of three top-10 finishes in the desert. He ended up fifth in the spring.

We’re not in Kansas anymore.

Hamlin has the best average finish of the four title contenders at Phoenix. His mean result sits at 10.78, improving over the past year thanks to fourth- and third-place efforts in the fall and spring, respectively. He has two wins at this track, the most recent coming in the fall of 2019 when he pulled off a clutch victory and locked himself into the final playoff round at Homestead-Miami Speedway.

Hamlin leads all playoff drivers with the two wins, but there’s also several other historically successful drivers at Phoenix that populate the field.

Kurt Busch has one victory, Logano and Ryan Newman have two and Kyle Busch three. Those all pale in comparison, though, to Harvick.

Harvick is still without a win in 2021, so it’s entirely possible that No. 4 could throw a wrench into the top-four-championship-four picture we saw play out last year.

The race will also mark several lasts for drivers. It is the final appearance for Chip Ganassi Racing’s NASCAR stable before the team folds after the season, with Kurt Busch off to join 23XI Racing and Ross Chastain to Team Trackhouse.

Matt DiBenedetto will be out of a ride for 2022 after his last start with Wood Brothers Racing, while he and Newman are in a similar boat with their plans for next year up in the air after Phoenix. Newman’s last race in the Roush Fenway Racing No. 6 will be Sunday. And, of course, Brad Keselowski officially departs the No. 2 for Team Penske en route to Roush’s No. 6, with Austin Cindric set to take his place.

It is also the final race before the single-lug Next Gen cars take to the track next year.

One of my favorite sounds. Will miss it. pic.twitter.com/EcauTq0Pxz

Prior to Sunday, both the Camping World Truck and Xfinity Series had their respective championships decided.

On Friday (Nov. 5), Ben Rhodes claimed his first Truck Series title at the age of 24, chasing down Zane Smith and moving the No. 21 to be the highest-finishing Championship 4 driver. Rhodes, driving the No. 99 for ThorSport Racing, finished third as Chandler Smith won the event. Zane Smith, Matt Crafton and John Hunter Nemechek all came up short of the title.

CONTACT AND BEN RHODES GETS BY ZANE SMITH FOR THE CHAMPIONSHIP LEAD. 8 laps to go. ? pic.twitter.com/dBDyQPCdZ5

Rhodes’ celebration was in full swing the moment he exited his truck, leading to an instant-classic press conference later in the media center.

I have never heard a description of how someone won a championship quite like this. Engine noises. “I was pissed.” “It ain’t happening mama jamma” and “Championship’s cool.” pic.twitter.com/hrLwrxEV5E

Less than 24 hours later, the Xfinity Series’ title event also came down to late-race contact, this time on an overtime restart. Daniel Hemric, winless in 207 starts across nine years of racing in NASCAR’s top three series, managed to hang with Cindric during the two-lap sprint, putting the chrome horn to the No. 22’s bumper out of the final turn and trading paint with the reigning champion as they raced towards the checkered.

Hemric beat Cindric to the line by .03 seconds as the two cars beat and banged, simultaneously securing his first win and first championship as he did so. The driver of Joe Gibbs Racing’s No. 18 subsequently celebrated by doing a backflip off the roof, evocative of Carl Edwards’ celebration not done in more than five years.