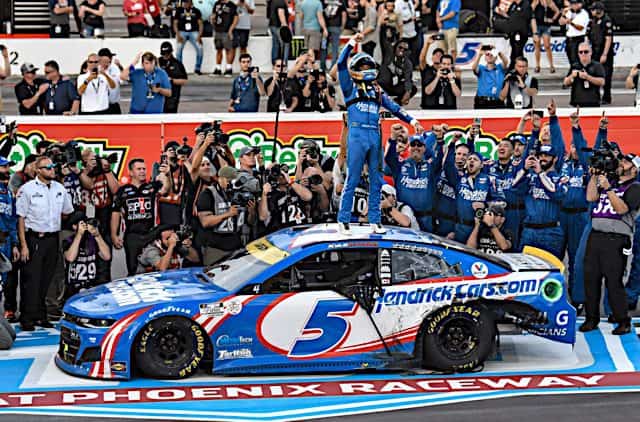 On an afternoon where it seemed like anyone’s game, it was Kyle Larson who took home the 2021 NASCAR Cup Series championship at Phoenix Raceway.

After nine wins through 35 races, Larson seemed to be on the wrong end of luck as the laps waned in the title race in the desert. But a late race caution set up the opportunity for an incredibly fast pit stop that sent him to a lead he never looked back from.

Larson was visibly in tears on the cool-down laps before he did a burnout that circled roughly half the Phoenix Raceway facility.

“I can’t believe it,” Larson said on the frontstretch. “I didn’t even think I’d be racing a Cup car a year and a half ago. To win a championship is crazy.

“There were so many points in this race where I didn’t think we were going to win,” he added. “Without my pit crew on that last stop, we wouldn’t be standing right here. They’re the true winners of this race. They’re true champions. I’m just blessed to be a part of this group. […] This is unbelievable. I’m speechless.”

Larson’s 10th win of the season featured the No. 5 crossing the 2,500-laps-led mark with 2,581 total, also marking the second straight championship for Hendrick Motorsports.

It was also crew chief Cliff Daniels’ first title, coming in his second season atop a Cup Series pit box.

Larson rolled off on pole with Elliott alongside, Hamlin behind them in sixth and Truex back in 12th.

It was all Elliott early on, with the No. 9 running up front early and often as several early cautions re-racked the field in stage 1. Larson was called to pit road during the first yellow, waved for a Bubba Wallace crash, and dropped outside the top 30 with the decision.

Corey LaJoie gets into him in Turn 3. TV: NBC pic.twitter.com/A0H1xZ5SRy

Wallace crashed after contact between Ricky Stenhouse Jr. and Corey LaJoie collected him, and a quick subsequent caution was for the latter two drivers as well.

A few cars stayed out under that caution, which led to Ryan Blaney leading a chunk of laps with Kevin Harvick in pursuit. Larson moved up to second with Elliott in tow, but the No. 9 couldn’t pass the No. 5 and fell into Harvick’s clutches.

Harvick then scooted by Larson and so did Elliott, the No. 4 battling with Blaney for the lead and the duel starting to stack up the entire field. That stack-up allowed Truex, whose car started to show more speed, to pick off the top five one by one and take the lead.

Back of all this was Hamlin, who rode around fourth of the four title contenders for much of the opening half of the race. He did get by Larson for fourth, while his Joe Gibbs Racing teammate in Truex pulled away to win stage one.

Early in stage two was when the Championship 4 drivers made up the top four spots, with Elliott leading Truex and the No. 19 closing. A caution for Quin Houff crashing out in StarCom Racing’s final event condensed the field again, followed by two others for Stenhouse and Chase Briscoe crashes.

For the @StarcomRacing team, this is it as the team charter has been sold. #NASCAR pic.twitter.com/keaverdYJC

By that time, Elliott was in the lead with Larson close behind, but that order changed hands when Larson’s pit crew were able to help him exit pit road ahead of the No. 9.

Elliott gave chase to Larson for much of the end of stage two, with Hamlin a second and a half back and Truex two ticks in the rear-view mirror, but the No. 5 pulled away and scored the stage victory.

That is a nasty crash for Anthony Alfredo, and a huge break for Martin Truex Jr.! #Championship4 pic.twitter.com/YCmrW9zOdS

Larson kept his momentum going by clearing Hamlin and Elliott to lead early in stage 3. Elliott was only able to close in so much , getting within half a second of Larson, and wasn’t able to pass him. Hamlin started to narrow the gap from his third-place position while Truex fell further back.

Truex pitted under green, the first to do so from the Championship 4, and no sooner was he on pit road than a caution waved. Anthony Alfredo smashed into the wall on the exit of turn 2, but Truex exited ahead of the leaders to stay on the lead lap. This allowed the No. 19 to stay out under caution and inherit the lead; his teammate Hamlin’s crew delivered a solid stop and got the No. 11 off pit road ahead of both Elliott and Larson.

That is a nasty crash for Anthony Alfredo, and a huge break for Martin Truex Jr.! #Championship4 pic.twitter.com/YCmrW9zOdS

The two Gibbs stablemates led the field as everyone fanned out behind them, with the Team Penske cars of Blaney and Joey Logano running third and fourth.

Truex cleared Hamlin for the lead as Elliott moved to third; Larson, meanwhile, worked his way through traffic.

The No. 19 remained out front but Hamlin stayed within eight-tenths of his teammate, while Elliott started to fall back and Larson remained mired in fourth.

A caution for David Starr sent the entire field down pit road, where Larson’s crew turned in a pit stop of less than 12 seconds to get him out in front. Hamlin, Truex and then Elliott followed.

Larson retained the lead on the restart while Hamlin fell to third, but Truex started hounding Larson for the lead and championship. The No. 19 pulled to within three-tenths of the No. 5, nearly making contact, and then settled in behind him as Hamlin started gaining on the top three.

Larson held a seven-tenths of a second advantage over Truex with 10 laps to go, though Hamlin proved to be the fastest on track. Truex couldn’t quite close, though, despite a final-laps charge from the No. 19.

Truex got runs coming out of turn 4 each lap but the last, when the lapped car of Joey Gase prevented any kind of move, and Larson secured his 10th win of the season and the 2021 title.

“I had a lot of thoughts there […] really since before intros,” Larson said of the championship atmosphere, “[and] right before intros it all hit me. I had tears running down my face just doing the ride-around […] it was just a different atmosphere than I’ve ever been a part of.”

Larson celebrated with his son Owen, who stood atop the No. 5 with his father in victory lane.

Kyle Larson getting Owen in on some championship celebration action ?

“This event was crazy,” Larson said. “This format is wild, I’m glad we were able to get it done. And yes, a big shoutout to my parents for getting me involved in racing, my dad for everything he did, building my go-karts when I was young to get me playing around, my mom for videotaping every lap I ever raced and giving me something I could look at and study and get better. Gosh, so cool, I can’t believe it.”

Even one of the all-time greatest drivers got in on the congratulatory action.

Keselowski finished 10th in his final race with Team Penske, while Matt DiBenedetto came home 12th in his last for the Wood Brothers. Ross Chastain and Kurt Busch finished 14th and 16th, respectively, in Chip Ganassi Racing’s last effort in the Cup Series, while Ryan Newman recorded a 23rd-place effort to close out his tenure with Roush Fenway Racing.

The stars aligned for Larson. All four contenders had strong cars and looked like the favorite for a time, But Larson was easily the most deserving of the title based on his season, and I am happy he won. Special kudos to Rick Hendrick for taking a non-PC chance on Larson. Glad to see it pay off.

hell, it was a no brainer for Rick & Jeff. Great season for Kyle and the team. He finished the deal Denny. lololol

I agree with you both. Based on stats, the most deserving team won. Agree that Larson had too much talent for someone not to take a chance, and risk takers have the biggest payoff when things work out. I would have been happy with ABH winning, but Larson was definitely my first choice given his year long dominance.

It still bothers me that the 4 contenders ran 1-2-3-4 for so much of the race. It cheapens the whole race because statistically it shouldn’t be able to happen if everyone is racing for the win. Surely one of the other 35 cars could have stumbled onto a setup and pit stop to finish in the top 4. Were there any other races where the top 4 drivers in points ran 1-2-3-4? I doubt it.

I turned on the race with 75 or so to go, saw the top 4, felt irritated about that, and immediately turned it off. Went at watched some Roadkill Garage instead. I’d rather the other cars not even be on track if they’re just going to roll over and play dead. It’s phony and contrived.

Although I do agree about Larson deserving the title based on his performance this year. Glad this sham show didn’t steal it from him.

Bothers me too. Kyle Busch had a practice AND qualifying. I would bet anything that car was ready. I’m a gambler, do you know what the odds must be against them finishing top four ! Astronomical.

I see the NASCAR leadership team must’ve all logged in to give us thumbs-down for “actions detrimental to stock car racing”! lol

Last edited 6 months ago by Jeremy
5
0

Yeah, I was trying to figure out what exactly upset the thumb-voters. Larson winning? Hamlin losing? or Questioning the format by pointing out the obvious of the 4 contenders always running 1-2-3-4?

Would we find out if the Larson team got a penalty for a loose wheel nut?

If you ain’t cheatin’ you ain’t tryin’. So what if they catch you. It doesn’t really affect anything except your wallet.The results don’t change.

As cheatin’ goes, a loose lug nut hardly qualifies if it does at all. There is just as much chance of it backfiring on you and having to pit.

It looks like the loose wheel nut was just enough of an advantage to get Larson out first. And that is why they do it. It can win an event and a title.