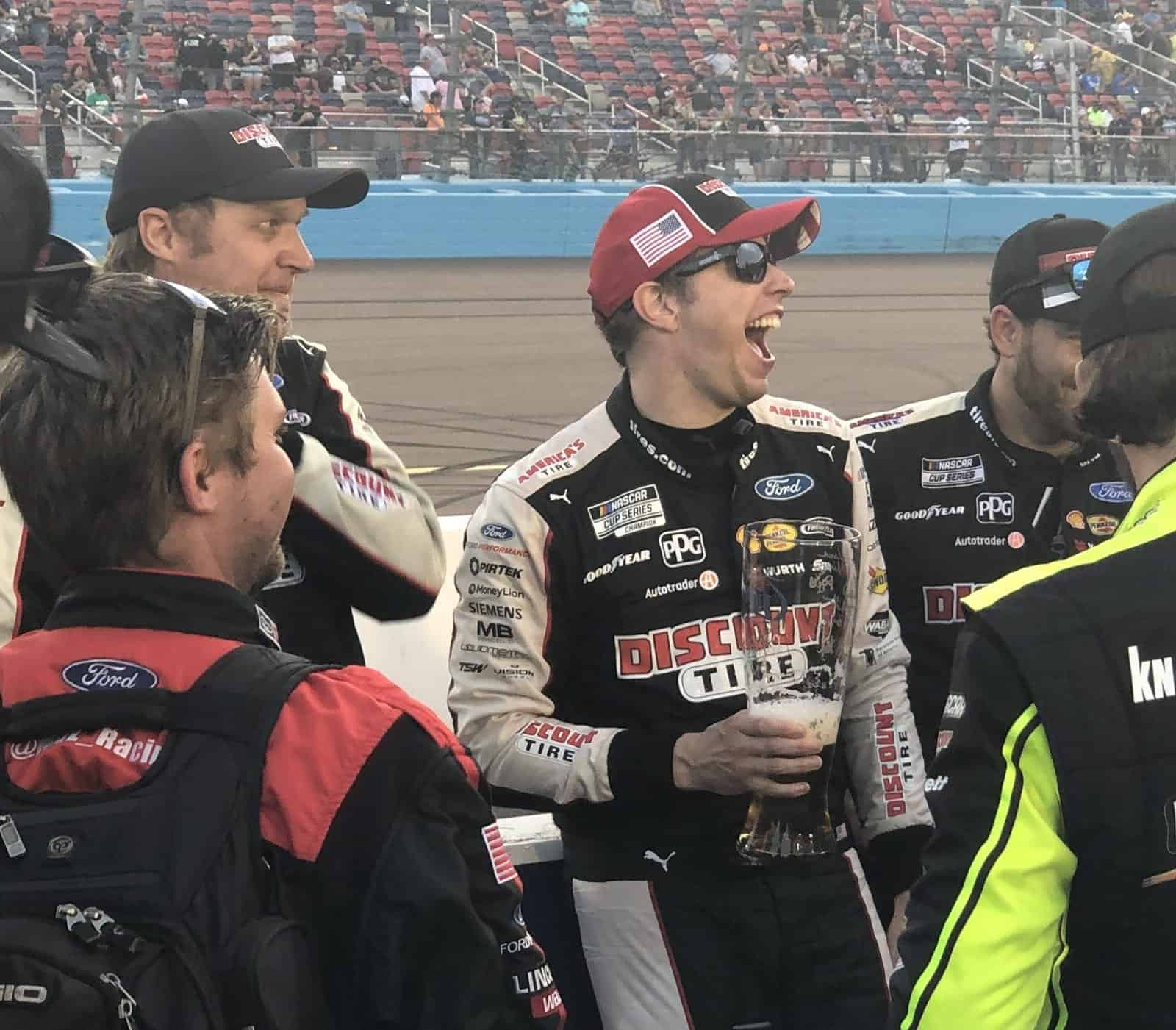 There was a large one on the fronstretch which attracted most of the attention, as Kyle Larson began his reign as the NASCAR Cup Series champion.

But as the crowd cheered him on, a much more intimate good time began to unfold on pit road.

Brad Keselowski‘s No. 2 Ford, the last he would ever drive for Team Penske, was just starting to cool down. About six minutes earlier, in his 434th Cup start for the team, Keselowski had crossed the finish line in 10th.

While Keselowski stood waiting by the car, a small cardboard box suddenly appeared. Inside was an old friend, one he got to know nine years ago.

It was the tall Miller Lite glass Keselowski had sipped from live on SportsCenter after winning the 2012 Cup title.

Covered in signatures, Keselowski hadn’t drunk from it since that night.

“I’m going to need a lot of beer for this,” Keselowski observed.

Someone was listening. Two silver crates, each with the No. 2 on top, containing cans of Miller Lite and red solo cups were soon rolled in on a dolly.

The cups were ignored. As Keselowski leaned against the pit wall, crew members began tossing cans to others across the car.

“Not ESPN today, but this counts,” Keselowski called back.

A small circle of friends began gathering around Keselowski.

It was a last roundup of sorts.

Keselowski was flanked by his two teammates, Ryan Blaney and Joey Logano. Both were drivers Keselowski helped bring into the Penske fold. He was an advocate for Logano to join the team in 2012 after four disappointing seasons at Joe Gibbs Racing. Keselowski hired Blaney to drive for his Camping World Truck Series team part-time in 2012.

Off to the side holding a beer was Blaney’s crew chief, Todd Gordon. Gordon had just led Blaney to a fourth-place finish in his final race as a NASCAR crew chief.

Also present was Jimmy White, Keselowski’s PR rep for the last few years. White had first entered the NASCAR world in 1994 working for the team that fielded Greg Sacks’ No. 77 U.S. Air car in the Cup Series. With Keselowski’s departure and downsizing at Penske, it was White’s last race with the team.

“It’s special. It’s a group of guys … who mean something to me and my career and not just professional life, personal life,” Keselowski said. “They’ve been there for me, keep me safe and help me make a living and feed my kids and take care of my family. And I’m proud of that, proud to see them succeed as well in everything they do.”

Pictures were taken, beer flowed and laughs were had.

While not as flashy as Larson’s party, Keselowski viewed the gathering as a celebration.

“Last day at college?” Keselowski asked. “I gotta get my ages right. Don’t get me in trouble for that. I’m sure some people last day of high school did this but that’s another story for another day.”

In the middle of a serious answer about his emotions surrounding the day, a sharpie sailed through the air and narrowly missed pelting Keselowski in the back of the head. Without looking, he correctly guessed its source.

“That must have been Logano.”

A laughing Logano confirmed it.

In two days, Keselowski’s new job as a driver/co-owner at Roush Fenway Racing will begin. Life is about to change for many people whose lives had orbited around Keselowski for more than a decade.

“I’m not going anywhere,” Keselowski said. “I’m still going to be at the racetrack and just won’t be in all the meetings with these guys. Won’t be in that day-to-day grind, I’ll be in a different grind.”

Keselowski intends to keep one brotherly relationship alive and well.

“(Logano’s) got a new house coming, I’m gonna crash his house,” Keselowski said. “Probably got a better pool. We’ll see if he lets me in.”

Brad’s a class act. Best of luck to him in his new venture!

His coming into the Roush org. is the most positive news for that org they’ve had since the departure of Matt, & Carl, & the retirement of Gregg. The teams need shaking up, & Brad’s just the one to do it. He’s said he thinks he can win next year, I hope he’s right. But a lot of pieces have to fall into place, not the least of which is Ford stepping up. I’ll be watching with interest.

Me too. With the new car, plus with Brad’s mastery of superspeedways, a win next year would’ve surprise me in the least. And I think Brad will make Beucher a better driver as well.

Loved seeing “THE GLASS” back at the track. I still love the memory of watching him get progressively more snookered the night he won the championship. Seems like a long time ago.