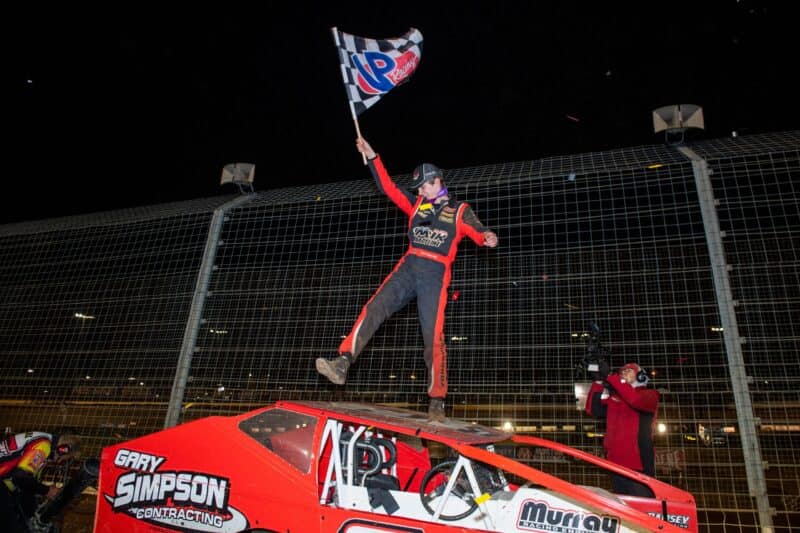 None of those drivers, however, would grace World Finals victory lane at Charlotte over the weekend. Matt Sheppard came closest, finishing in the runner-up position in Saturday’s Super DIRTcar finale to a dominant Brett Hearn, who led all 30 laps from the pole in a feature that was shortened with weather forecasted to be heading for the Charlotte area.

The race’s opening 13 laps were thoroughly entertaining, with Hearn being relentlessly stalked by Rocky Warner for the race lead. Warner, however, would slow up on lap 14 with an apparent suspension issue.

Friday night’s (Nov. 5) DIRTcar feature was the exact opposite, with youth being served. 17-year-old Alex Yankowski blew by a dominant Larry Wight on a restart with 10 laps to go, scoring his first career series victory after posting the fastest qualifying time and winning his heat race earlier in the evening. The win was made more significant in that Yankowski had lost his grandfather earlier in the day, making for an emotional display in victory lane.

The big story of the weekend is the surprise win by @Alexalex84y last night, which was an emotional win for a number of reasons as explained by @dirtvision's @DaveRieff and @Dan_Kapuscinski. pic.twitter.com/HE63INJpJ4

On the sprint car front, Logan Schuchart proved to be absolutely cursed on the weekend, blowing a tire while leading both Friday and Saturday’s feature races, handing victories to David Gravel and Brent Marks, who scored his second feature win in three starts with his newly formed Murray-Marks Motorsports team.

The most significant battle of the weekend transpired in the sprint car feature Saturday, with Donny Schatz going from 25th to third in the feature after being forced to take a provisional to make the start. Despite Schatz’s banzai charge, he fell one spot short of overtaking Carson Macedo for third in the final series standings.

That left the late models, with Lucas Oil Late Model Dirt Series (semi) regular Jonathan Davenport sweeping Friday and Saturday night’s feature events. Friday night saw Davenport get the better of WoO champion Sheppard inside of 20 laps to go, while Saturday had “Superman” have to hold off two spirited charges by teenager Garrett Smith to score the win.

Yankowski’s big-time DIRTcar win Friday made headlines on multiple fronts. For one, winning a major-league race the same day as losing a relative takes serious guts. But to do it at the DIRTcar level, a form of racing that is absolutely dominated by veteran drivers, made this one really stick out. Congratulations and sympathies both to the Yankowski family.

Jonathan Davenport has had a stellar 2021, but there’s no doubting on the whole he’s had to play second fiddle in the super late model world to Brandon Overton since late spring. That hasn’t been the case the last month, as Davenport swept the Georgia swing of the LOLMDS tour, then swept the World Finals this weekend.

What’s more, Davenport, who technically ran an “outlaw” schedule in 2021 after he skipped the LOLMDS Brownstown Icebreaker to go after (and win) the $50,000 Bristol Dirt Nationals, made a point to call out the World Finals event for pay that doesn’t quite match the prestige of the event. (Davenport’s feature wins each paid $12,000-to-win, which is standard fare for the LOLMDS features Davenport is a regular in). Superman’s onto something there, as the World Racing Group made a point to stress that the Dirt Track at Charlotte was sold out on Saturday with more than 130 cars entered in the pits.

Davenport @TheFast49 interview was spot on 12k to win each night at Charlotte is absurd for that event in today's times. Heck @RThornton20rt might make more than the rest of the guys in Charlotte, racing a IMCA mod in Arizona for 2 nights. https://t.co/bz7w3tgti6

Given the way he ran this weekend, Brad Sweet had to be thankful he had the WoO points title wrapped up heading into the World Finals. What’s notable is that Sweet is perhaps the biggest name on the Outlaws tour that has not won a World Finals feature at Charlotte.

The success story here? Series runner-up David Gravel, who ended the 2021 campaign on a literal tear. Gravel won Friday’s feature and scored a top-five finish Saturday as well. If he can force the points race to carry into the World Finals next year, his No. 2 team has the notebook to break Sweet’s series stranglehold.

No one in any discipline of racing was more cursed this week than Logan Schuchart. Friday, Schuchart led 16 of the first 17 laps and was driving away from the field before blowing a tire. Saturday, Schuchart led all 22 laps from the pole before cutting another tire down three laps short of victory. Nothing more to say here.

All that stood between @LSchuchart1s and a dominating @World_Finals win.

The @SharkRacingWoO driver led 38 of 55 laps this weekend, but horrendous luck kept them down on both nights. pic.twitter.com/aGt3Ih3r7X

Kevin Root was forced to scratch entirely from Saturday’s DIRTcar event after enduring a hard crash in Friday’s feature, an innocent victim of 2021 Short Track Super Series champion Mike Mahaney; Mahaney’s steering broke, with his out-of-control car turning into traffic and collecting Root’s machine. Mahaney, to his credit, apologized in a post-race interview.

Ryan King’s hard-luck 2021 season in the Warrior Race Cars house car continued in Friday’s late model heat races, though it was entirely of his own volition. In position to transfer, King clearly overdrove turn 3 underneath Josh Richards in heat three, spinning himself out of a transfer and Friday’s feature. King missed both World Finals features on the weekend.

This weekend was a memorable one for the racing Haudenschilds, but not for any on-track results. While it was a great story to see “Wild Child” Jac Haudenschild run the final sprint car races of his career in a machine fielded by his son, WoO regular Sheldon Haundenschild, neither made any noise at the front of the field. Sheldon was forced to run B-mains both Friday and Saturday, while Saturday saw Jac’s career come to an end courtesy of a Big One wreck in turn 2 that involved both Haudenschilds.

The biggest of sads: Jac Haudenschild needs towed back to the pits in his final sprint car start.

It was announced early during Friday’s program that the World Finals would be expanding to a four-day format for the 2022 season, with details to be determined, but of course tickets were on sale immediately. According to the release on the WoO website, Wednesday will be a qualifying day, which begs the question, why? Suddenly the rumors sprung that the World Racing Group had encouraged teams to stay away from the newly created “Prelude to the Finals” event at Cherokee Speedway earlier this week seem more credible.

Class act by this speedway to still pay in full. If Rumor the WRG group told drivers to stay away…. My money will not not be going to them again. Hope someone does a story on this. Did we forget in 2020 we could not even attend a race. I wish the best for this track.

Despite being in the South, which is still late model country, it was visibly striking to see how many fans went streaming for the exits Friday after the sprint cars got done racing, even though the late model feature had yet to be run. It was cold for this time of year in North Carolina, but it wasn’t that cold.

Another note on being in the South. South Carolina’s Chris Madden definitely did us proud, winning the $3,000 cornhole tiebreaker match with Brandon Sheppard prior to the start of feature racing Saturday.

Having said that, the tiebreaker struck me as hopelessly gimmicky. For context, both Madden and Sheppard entered Saturday’s late model season finale tied for the most fast time awards on the year. Since neither won fast time on Saturday, a tiebreaker was needed to determine who would win the $3,000 prize, so the decision was made to break the tie via cornhole, since the sponsor of the fast time award is Slick Woody’s Cornhole Boards.

A creative sponsor plug? Yes. A proper way to determine an award between racecar drivers? Hardly. Split the prize in two. Go to which driver has the most second-place qualifying speeds. Have each driver go out and run a tiebreaker qualifying session. But tossing beanbags to determine the fastest late model driver of 2021? Insert eye roll here.

Thoughts on late model ace Brandon Overton making his sprint car debut this weekend. Yes, Overton was woefully off the pace, never coming close to transferring out of Friday’s C-main. But props to the man for having the guts to dive into the deepest of deep ends, making his first sprint car start in a 410 at the World of Outlaws level. That he survived Friday without crashing is an accomplishment in itself. And the story of the deal coming to pass thanks to beers by the hauler in the middle of the night was totally fitting.

During an interview with @Chase_Raudman2, Brandon Overton just revealed that he was drinking with Jason Sides after the action was canceled on Thursday.

Said they were shooting the shit and he said "Ive been dying to try driving one of those sprint cars." Sides offered him(1/2)

Meanwhile, 3,000 miles away in Charlotte, the World of Outlaws late model series had Brandon Sheppard, a literal Brandon, being interviewed 10 feet from the grandstands in Charlotte after their feature, and no such chant broke out. Go figure that the sanctioning body that isn’t busy trying to publicly position itself on the right side of Twitter’s outrage brigade isn’t dealing with “vocal minorities” making a scene.

Watching Brandon Sheppard and Tim McCreadie, the champions of the nation’s two largest late model tours, go at it door-to-door to close Saturday’s finale was damn entertaining, but also a reminder of how much of a damn shame it is that such battles are few and far between given that the WoO and LOLMDS tours do their own things. PLEASE co-sanction a mini-tour of truly national events sooner than later… watching the Lucas Oil regulars do battle with the Rocket house car needs to happen more often.

22 – spots made up by Donny Schatz in Saturday’s sprint car feature, the tallest climb made by a World of Outlaws hard charger in 2021.

48 – super late models entered for the World Finals, the lowest car count in the event’s history.

Where it Rated (on a scale of one to six cans with one a stinker and a six-pack an instant classic): We’ll rate the World Finals four Bud Lights that didn’t need a cooler in the cold North Carolina air. Two straight days of star-studded lineups in 410 sprint cars, big-blocks and super late models is a dirt racing dream. Truthfully, two days was a perfect length given than each race day program ran six-plus hours, with neither evening producing any “classic” races.

Up Next: The World of Outlaws may be done for the season, but dirt racing rolls on. Sunday, the High Banks Classic goes off for center-drive modified fans at Bridgeport Speedway in New Jersey, while Monday kicks off nearly a full week of racing with the Duel in the Desert at the Dirt Track at Las Vegas Motor Speedway. Coverage can be found on Flo Racing and RaceXR+, respectively.