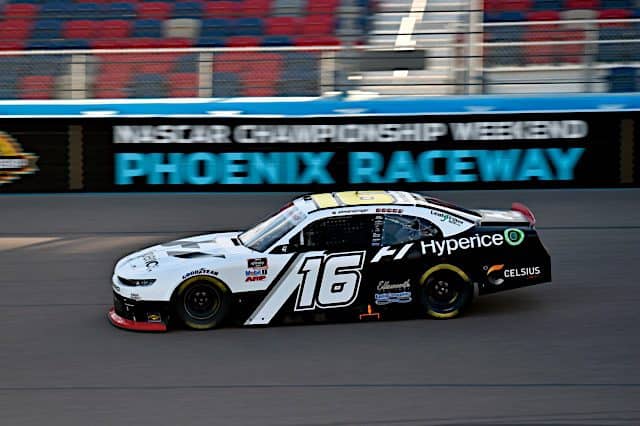 With just over 20 laps to go in the NASCAR Xfinity Series Championship Race at Phoenix Raceway Saturday night (Nov. 6), Austin Cindric boasted a two-second lead. While the margin between him and second place shrunk a bit while navigating lapped traffic, the championship looked to be his to lose.

Well, there’s an old saying: “expect the unexpected.” In NASCAR, you could almost say, “anticipate the expected,” because what was expected to happen was a caution. No way could the race finish after a 60-plus lap run to the checkered flag.

That yellow triggered two more cautions, including a final one that resulted in NASCAR Overtime. Cindric had his car in front of Daniel Hemric as the pair exited turn 2 for the final time. That’s when Hemric saw not only the championship but his first career victory directly in front of him. He bumped Cindric, moving the defending champion up the track as they entered turn 3. Hemric moved up as well as their doors touched heading off turn 4, both accelerating hard toward the checkered flag. The contact slowed Cindric just enough for Hemric to edge ahead, by mere feet, as he won both the race and the championship.

How many times did a race enter the closing stages this season and everyone thought that day was the one Hemric would finally become a NASCAR winner? There were several. Atlanta Motor Speedway in July and last weekend at Martinsville Speedway stand out among them all. At Martinsville last Saturday, Hemric made the calculated decision to play it safe on a restart to make sure he would remain eligible for the championship.

He settled for third last week to become the champion this Saturday at Phoenix. Hemric led for a total of 48 laps, which included winning stage two. His car improved as each run progressed, gaining speed on every competitor except Cindric. By the time the race approached 20 laps to go, he was two seconds behind Cindric, in second and likely needed a caution to beat him.

The Allmendinger yellow gave him that chance. There were three restarts inside of 15 scheduled laps: one on lap 188, another on lap 193, and the final one in NASCAR Overtime on lap 203. Hemric chose the bottom on each restart, despite knowing restarting on the inside didn’t produce the best results throughout the night. However, Hemric made it work each time and maintained second place.

Coming to the white flag, Hemric was loose entering turn 3, slid up, and nudged Cindric. The two shortcut the dogleg and entered turn 1 of the final lap with Hemric going low and Cindric looking for the momentum on the high side. Hemric slotted in behind Cindric as they traveled down the backstretch one final time. The bumper was given, and the door was opened. Hemric did what he needed to claim his first victory and championship in NASCAR.

Hemric’s three full seasons in the Xfinity Series have seen him reach the Championship 4 each time. He is one of the most consistent drivers in the series, with only poor luck keeping him from victory lane in the past. There was no better stage for achieving his first career victory than Saturday night in Phoenix.

Unfortunately, a late-race caution caused a ripple effect that arguably cost Cindric his second championship. You can argue that Allmendinger’s spin with 20 laps to go changed the outcome. His car spun around just as NBC reported he planned to pit, rectifying the vibration he’d been suffering from for several laps. Don’t be surprised if water cooler discussions across the country debate whether the spin was intentional on Monday.

Regardless, the spin and resulting yellow erased Cindric’s two-second lead over Hemric, saving Allmendinger from going at least one lap down. But the bigger question surrounds what might have been for Hemric and Cindric.

What decisions would Hemric have made with only a single restart following Allmendinger’s caution (instead, there were three)? What if he caught Cindric under green-flag conditions? These are the questions that will go through Cindric’s mind in the weeks to come, those what-ifs originating with the caution with 20 laps to go when Allmendinger spun. In his post-race interview with NBC, Allmendinger apologized to Cindric for the spin that likely cost him the win and the championship.

Sage Karam is looking to switch to stock cars in 2022 but didn’t do himself any favors in this race when he was at the center of two cautions in stage three. On lap 100, contact initiated by Karam sent Joe Graf Jr. hard into the wall, resulting in his retirement from the race.

Two laps after the next restart, once again, Karam made contact with a competitor. This time, it was Matt Mills, who was able to continue despite heavy right-side damage. (Mills finished 29th as the last car on the lead lap.)

Karam has kept his nose clean through his first four NASCAR starts before Saturday’s event. But you’re only as good as your last race, and Karam’s two incidents will leave a sour taste headed into the offseason.

Sometimes u have great days sometimes u have bad days. Today was a bad day for me. First I want to apologize to @mattmillsracing and @Joegrafjr both of those were on me racing hard for a lucky dog spot and I simply just made mistakes. I’ve been on their side and it’s never fun.

Sheldon Creed is moving to the Xfinity Series next season with Richard Childress Racing. But Saturday night, we saw a preview of what to expect from the 2020 NASCAR Camping World Truck Series champion. He qualified 10th in a B.J. McLeod Motorsports Chevrolet and finished 10th after spending a large portion of the race inside the top 10. Besides Jeb Burton coming across his nose with less than 15 laps to go, spinning Jeb, Creed had a quiet and uneventful race. He didn’t rough anyone up or interfere with the Championship 4.

The finish was B.J. McLeod Motorsports’ fifth top 10 of the season, a new best for the team after scoring only three prior to 2021.

“How about those race fans. Was that backflip good enough for you? *fans cheer* I’ve been waiting a long damn time to do that. I know I’ve given up a lot. People have doubted me. I’ll do it all over again for a night like this.” – Daniel Hemric

“If everyone in the stands enjoyed it, it’s good racing.” – Austin Cindric, when asked about whether the move by Daniel Hemric was fair game

Hollywood couldn’t have written a better script for Hemric. He had reached the Championship 4 in the Xfinity Series in 2017 and 2018 without winning a race, graduating to the NASCAR Cup Series in 2019 despite that goose egg. But after a single season in Cup, he was out of a ride for 2020.

Eventually, an opportunity at JR Motorsports came along to drive part-time in NXS. For 21 races of 2020, he was behind the wheel of the No. 8 Chevrolet, but that opportunity ended with another winless season. Many wondered if Hemric would ever be a NASCAR winner. In fact, many were surprised when Joe Gibbs Racing gave him a full-time opportunity for the 2021 season.

As the year progressed, the doubters only grew. Hemric was in some of the best equipment and had some of the best resources the Xfinity Series could offer. But through 32 races, he failed to reach victory lane. He accumulated 14 top fives and 21 top-10 finishes through those first 32 events; not a bad record, but still no wins.

Last month at Texas Motor Speedway, Hemric earned his 10th career second-place result, tying Dale Jarrett for most runner-up finishes before a first career win. Further evidence he was destined never to win came last weekend at Martinsville when a late-race caution robbed him of the victory. He settled for third to ensure he would be racing for the championship at Phoenix.

In a twist of fate, Hemric was the beneficiary of a late-race caution this week. Hemric reached out and took the opportunity to grab what he’d been chasing for years – a win. I wonder what means more to him: the championship or the victory?

I fail to think of a comparable scenario in sports to what Hemric achieved on Saturday night. The night he no longer has to answer the question of when he’ll win his first race, he also becomes a champion? That’s unreal. Unimaginable.

Yet for Hemric, it’s fitting.

Up Next: Welcome to the NASCAR offseason. In 105 days, the Xfinity Series will return, reloaded for a brand new season of racing. The year kicks off at Daytona International Speedway on Saturday, February 19, 2022 with the Beef. It’s What’s for Dinner 300 at 5 p.m. ET on FOX Sports 1.

Newly crowned champion Hemric departs Joe Gibbs Racing to join Kaulig Racing, where he will defend his title. Two of the three drivers he beat for the championship return in 2022. Allmendinger will be Hemric’s teammate at Kaulig while Gragson will be back at JR Motorsports, though he’ll have a new crew chief as Dave Elenz makes the move to the Cup Series to work with Erik Jones.

Meanwhile, Cindric moves to Cup to drive the famed No. 2 Team Penske Ford vacated by Brad Keselowski. Ty Gibbs and Sam Mayer will be full-time next season, as will short-track hero Josh Berry. Creed and Austin Hill jump from the Truck Series to become Xfinity teammates at Richard Childress Racing, stacking the NXS lineup full of title contenders.

So enjoy the break, NASCAR fans, because the 2022 season will arrive sooner than you think. I wish you all a Merry Offseason!