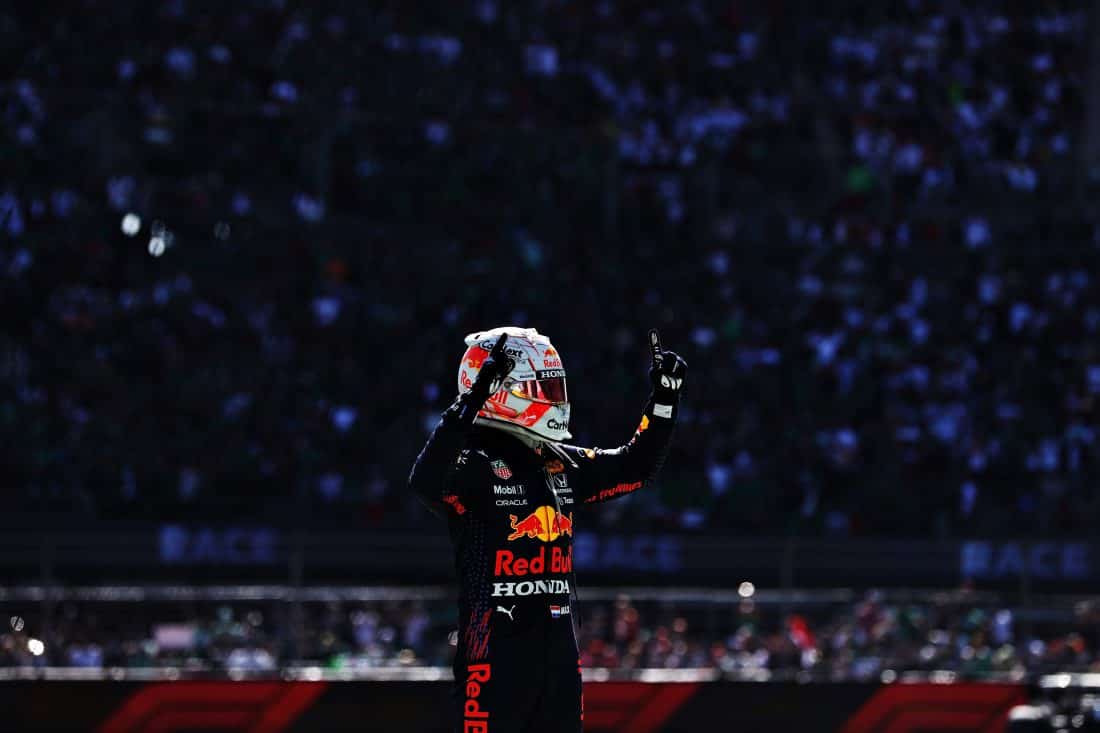 Max Verstappen failed to earn the pole for the Mexican Grand Prix and it may have been a blessing in disguise. His third-place starting position allowed him to use the slipstream to blow past the Mercedes front row and then steal off into the distance. With P1 secure, he tore away from second-place Lewis Hamilton after the safety-car period at the start of the race, and by lap 5 was already managing a two-second gap.

Verstappen earned his ninth win of 2021, the 19th of his career and his third in Mexico. His lead in the Formula 1 driver standings is now 19 points ahead of Hamilton, and there is every reason to believe that he will be the champion in four more races.

Hamilton could do nothing to challenge Verstappen and crossed the line in second with Sergio Perez nipping at his wing, to the delight of the Mexican fans. Pierre Gasly enjoyed a quiet drive and finished fourth with the Ferraris of Charles Leclerc and Carlos Sainz taking fifth and sixth.

Sebastian Vettel earned a surprise seventh-place finish, his best since his fifth at Belgium. Kimi Raikkonen equaled his best result of the year by earning eighth, with another former champion, Fernando Alonso, finishing ninth. Lando Norris started in the rear and rebounded to take the final points-paying position of 10th.

What little of a race existed in Mexico ended when Bottas left the outside racing line open, allowing Verstappen to cruise by on the outside and place his Red Bull in prime position to pip both Mercedes.

We got by with a little help from our friends ??pic.twitter.com/r1RJgpe4Xd

Red Bull were sure to peg their Mercedes counterparts by calling them ‘friends’ and helping Verstappen go from third to first.

After the safety-car period ended, as track personnel cleared the surface of debris and Yuki Tsunoda’s car, Verstappen drove away and took such control of the race that even if his engine had failed, he still probably could have gotten out and pushed his car across the line for the win.

– On a day where the focus was on the defending champion trying to stave on the challenge from a driver who is likely to be the next champion, one of the bright spots was seeing three former champions racing in the points in order. The triumvirate of Vettel–Raikkonen-Alonso may not be the threats that they once were, but seeing them prove, at least for a race, that experience matters came as a delightful moment of nostalgia.

– Yuki Tsunoda had a confusing weekend that ended on the first lap of the GP. Like his teammate, Tsunoda enjoyed a fast car and looked set to have a decent race — except for the fact that he would start from the rear for taking a new powerplant and associated parts.

Through the practice sessions, Tsunoda looked quick. He stayed close to Gasly on the timesheets and seemed like he would be a driver to watch in coming from the back.

Then, after getting to Q3 in qualifying, Tsunoda still appeared to be the improved driver that has raced during the second half of the season. That idea, however, lasted until he lost control of his Alpha Tauri on his hot lap, causing Perez and Verstappen, who sat in his slipstream, to lose their hot laps as well.

Christian Horner’s criticism of Tsunoda going off track in qualifying brought some storm clouds to Tsunoda’s solid weekend. After Tsunoda’s miscue, followed by Perez also botching his final run, Verstappen could be heard on the radio calling Tsunoda an “idiot.” Horner followed this remark by asserting that Tsunoda had ruined Red Bull’s efforts to claim their rightful front-row positions.

Rather than attack Tsunoda, many fans rebuked Horner’s barbs, and the Red Bull team principal was forced to address his words. None of that changed the fact that Tsunoda would be starting from the rear, something that was his undoing.

A crazy view of the Turn 1 chaos from Esteban Ocon's onboard! ?#MexicoGP ?? #F1 pic.twitter.com/AI0JZ1z99d

Rather than being able to escape the melee at the end of the field, Tsunoda’s day ended when Nikita Mazepin squeezed Esteban Ocon, who then sidled into Tsunoda. That was that. For the Japanese driver and his team, the weekend that had begun so well turned into nothing but a lost opportunity.

– Daniel Ricciardo nailed the start and put himself in position to leap into the top five. His efforts came for naught as he collided with Bottas at the apex of turn 1. The incident, one in which the stewards felt there needed no punishment, ended the day, in essence, for both drivers.

While neither driver may have been at fault, nor did either recover to score points. In fact, the two spent most of the race battling each other but unable to make any headway on the field. For both drivers and their teams, the day tallies as a loss. For Mercedes, the best outcome of the bad day was that Bottas denied Verstappen the point for the fastest lap, but the Silver Arrows now hold just a one-point lead over rival Red Bull (478.5 – 477.5).

In a similar fashion, Ricciardo’s unfortunate day, combined with Ferrari’s fifth and sixth-place results, means that the Prancing Horse now have the upper hand on McLaren, gapping the latter by 13.5 points (268.5 – 255). McLaren had been holding their own in the third spot of the constructors’ championship for much of the year, but that position now seems in jeopardy.

In Mexico, Ferrari looked strong and backed it up in both qualifying and the race. However, Ferrari would not be Ferrari if they did not attempt to undo their own positives. This time the issue came when the team pushed to have Leclerc let Sainz by in a bid to pass Gasly.

The request became an issue when Sainz iterated that Leclerc was purposely making moves to sabotage his overtake. While Leclerc did relent, and Sainz did try to catch Gasly but could not and then gave the spot back to Leclerc, the situation seemed to fade away at the finish.

But there are whispers that the team is struggling to balance Leclerc and Sainz. Even though Leclerc has been with Ferrari since the start of 2019 and has earned two wins, there are rumors that many of the engineers favor Sainz, who is in his first year with the Maranello outfit.

Throw in the fact that Leclerc only leads Sainz by 7.5 points (138 – 130.5) and the situation is one that has the potential to challenge the team and its leadership. How Ferrari handles the final four races between the two drivers will serve as a narrative for their offseason and how they move forward. That does not mean that Leclerc will be jettisoned, but rather that some may start feeling that Sainz is the number one.

– Sergio Perez deserved his Driver of the Day award. How cool to see the fans erupt every time he drove by one of the grandstands? In addition, he became the first Mexican driver to lead a Mexican GP, which seems like a strange notion. Hats off to Perez… but the driver of the day is Pierre Gasly.

Yes, Alonso, Vettel, Raikkonen and Norris all scored points after starting down on the gird. But Gasly started fifth, jumped a spot when Bottas became stationary, slotted into fourth, and then drove a race so quiet that writing his name should require the whisper font. Not only did Gasly put together a stellar stealth drive to earn fourth, but his finish brought Alpha Tauri level with Alpine for the constructors’ title (106 – 106). That finish came as a welcome balance after teammate Tsunoda bowed out early.

– Verstappen had nothing to complain about, stating, “I knew the start was very important today, we were three wide at one point and I was on the more ideal race line so I could brake later and get into the lead. After that I could do my own thing, the pace was very good today, so I could just keep building and creating a gap, the pit stops were seamless and the car was good throughout the race which was crucial today.”

– Perez was jubilant, saying, “This is a great result for my country, I really wanted more but unfortunately we didn’t get that… I could feel the fans’ energy when I was going through the stadium sector, and I was thinking about how many people were here for me, I could actually hear the crowd when I was driving through Foro Sol. I wanted more but I am just very happy to be on the podium of my home country, the Mexicans were so happy today. We are so competitive as drivers that when we finish third we aren’t happy, but today I had to enjoy it. Everyone who has been there since the start with me was there at the end of the race, and that was an amazing moment for me.”

– Hamilton acknowledged the obvious, saying, “First, congratulations to Max. That car was faster than we were this weekend and there’s nothing we could really do about it. I gave it absolutely everything. and obviously a great fight with Sergio at the end. but I’m grateful I could still at least get a second-place finish.”

– A resigned Ricciardo offered, “The first-lap incident was about as painful as they get because your race is pretty much over from the start. I was in a tricky position because I know that if I didn’t go for it, someone else would have, and I’d probably have been swamped by other cars. At the end of the day, I think it’s just a lap one incident.”