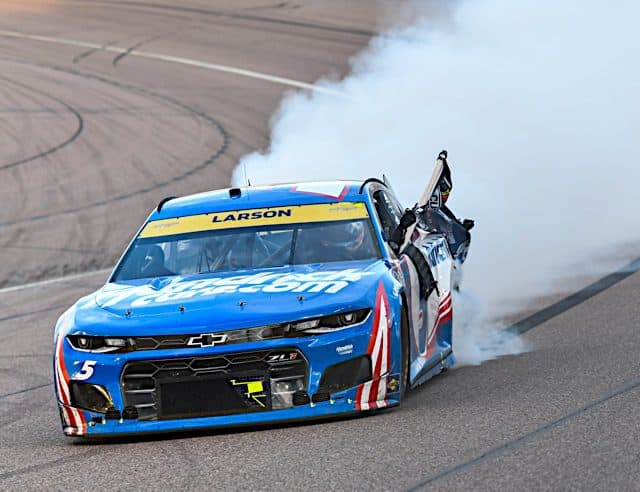 We’ve all seen examples of it before: the fastest driver doesn’t always win. Despite being a force to be reckoned with in nearly every race in 2021, Kyle Larson entered the finale at Phoenix Raceway on a level even with the other three championship-eligible drivers.

History has indicated that to win the title, a driver must win the finale. After all, in every season-ending race since NASCAR went to a highest-finisher-take-all format, a Championship 4 driver has wound up in victory lane with both the race and championship trophies. For that reason, it seemed nine-time winner Larson had to be the favorite to get it done. It wasn’t a complete runaway as some of his victories have been, but as he has in more ways than one, he made the most of his opportunity. The No. 5 was the number on the side of the very first Hendrick car, and Larson became the first driver since Terry Labonte in 1996 to carry it to a title.

Anyway, here’s a few more notable numbers after this weekend’s finale in the desert.

Larson became the seventh Cup driver in the modern era of NASCAR to earn double-digit wins en route to the championship. He joins some pretty elite company in that category with the other six being Richard Petty, Cale Yarborough, Darrell Waltrip, Dale Earnhardt, Jeff Gordon and Jimmie Johnson. Of those, only Petty, Waltrip and Gordon have accomplished the feat twice and interestingly enough, all three did so in back to back years.

That’s how many laps Larson led during the year, the most ever under the current 36-race format, and his 28.05% is the second largest percentage of the total laps run in the modern era.

Hailing from Elk Grove, Larson is the fourth Cup Series champion from the state of California. The first two, Gordon (Vallejo) and Johnson (El Cajon), also piloted Hendrick Chevrolets. The other Cali native to hold the big trophy? Bakersfield’s own Kevin Harvick.

A caution came out with just 28 laps remaining and Larson running fourth on the track. When the field hit pit road for the final time, Larson’s team fired off an 11.8-second stop, the fastest time for a four-tire change by the No. 5 crew all year. That stop, coupled with the advantage of having the first stall on pit road, enabled Larson to come out with the lead and the rest, as they say, is history.

It is likely that Ryan Newman has finished his career as a full-time Cup driver, which leaves 2004 champion Kurt Busch as the only driver who has competed in a race against seven-time champ Earnhardt. Busch raced in seven of the final eight Cup Series events in 2000 after Chad Little was let go from the Roush Racing No. 97, as well as the ill-fated 2001 Daytona 500.

Denny Hamlin didn’t win the championship or the most races in 2021, but in terms of consistency, he was unmatched. Hamlin not only finished every race, he completed all but four laps during the entire Cup Series season. He finished one lap down in the race at Nashville and failed to finish three laps at Talladega. That means he completed 99.96% of the laps run this season, the second-highest percentage in NASCAR Cup Series history.

Harvick failed to win a Cup race for the fourth time in his career and the first time since 2009. In three of his four winless seasons (including 2021), his best finish of the year came at Bristol.

With his fourth-place result on Sunday, Ryan Blaney has finished with 11 top-five finishes for the third consecutive year. Peculiar that he hasn’t been able to reach 12 top fives in a season since he began driving the No. 12 car.

With his first Xfinity Series win on Saturday, Daniel Hemric became the 2021 champion in that division. Hemric is just the second driver to ever win a national touring series title with only one win to his name. Bill Rexford, the 1950 Cup Series title winner, had just a single win in his championship year and never got another one in the years before or after.

When Kyle started running Nascar races, I paid attention. I knew he was a very talented driver that could take him to a championship one day. I was frustrated with hi being at CGR because they weren’t utilizing him to his fullest potential. I stopped watching Nascar when Kyle was suspended. I believe in second chances and was beyond thrilled when Hendrick picked him up; I knew then he would certainly shine…and he did. I haven’t been so excited by racing since Tony Stewart. Way to go Kyle, you truly are a champion, in life and on the track!

Yes, the storybook ending was the ultimate feel good story of the year. Topping Michael McDowell’s Daytona win.
But suppose that on the $$ stop that a lug nut was knocked off, & he came out 8th, & finished 5th. Then what would the story have been? Even before the midpoint of the season, there was talk of Hamblin clinching the regular season title. That Larson was able to close that gap & capture that title has mostly gotten overlooked. My point is that whoever wins the regular season doesn’t get anywhere near the respect that it deserves. Just like AJ & John Hunter are still a big winners. But because they didn’t win the championship, it’s like it was a tarnished season. When what it really was was a missed opportunity. the same as Harvick last year.

Got it, Hamlin is Mr. Consistent. Does $$ come with the title ! Prestige, respect. What exactly does that mean in the real world ! Ahhh, choked again.