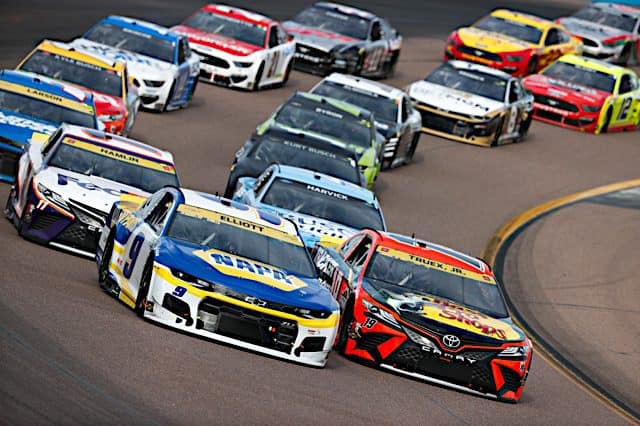 Earlier this year, I explored how NASCAR playoff points earned during the regular season impacted drivers’ performances in the playoffs themselves.  The goal of that study was to determine if a driver’s playoff point total could predict when they would be eliminated from title contention.  I also wanted to see if there were any notable year-to-year patterns related to how drivers advanced through the postseason.

Now, with the 2021 NASCAR Cup Series season complete, I wanted to see how playoff points affected the championship battle this year, and if any of the patterns from previous seasons continued.  So, here is the chart from my earlier article with the information for 2021 included.

Key: the colors represent when each driver was eliminated: brown for round one, orange for round two, green for round three, and blue if they reached the championship race.  Overall champions appear in bold, while regular season champions are italicized.

Reviewing the chart, the 2021 playoff results do not reflect major changes from what we have seen in past years.  Nobody was able to reach the championship race from deep in the playoff field.  Of the top four drivers, Denny Hamlin began the postseason with the least amount of playoff points.  Hamlin had been vocal over the last few weeks about losing the regular season championship in a close battle.  He was also incensed at Alex Bowman after getting spun from the lead in the closing laps at Martinsville Speedway.

Yet in the end, the races that Hamlin won mattered more than the ones he did not.  Victories at Darlington Raceway in round one and Las Vegas Motor Speedway in round two made playoff points moot for him early in the postseason.  Then, after the disappointment at Martinsville, the playoff points Hamlin earned in both the regular season and the postseason kept the No. 11 team in the game.

Just like Kevin Harvick in 2017 and Joey Logano in 2018, wins at the right time allowed Hamlin to make up his playoff point deficit.  Unfortunately for him, a third-place finish in Sunday’s race (Nov. 7) was not enough to capture the championship.

Looking further down the list, there weren’t even any drivers who came from deep in the field to reach the Round of 8.  Everyone who was still standing by that round began the postseason with at least eight playoff points.  Last among those drivers was Brad Keselowski, who was the biggest “underdog” success story of the playoffs.  Keselowski’s only victory of 2021 came at Talladega Superspeedway back in April.  The No. 2 team did not win any playoff races or even earn any playoff points after the postseason began.

But Keselowski did do an excellent job of maximizing his points earned in key races.  A second-place finish at Talladega Superspeedway netted him 52 points, vaulting him from eighth to fourth in the standings.  The next race at the Charlotte Motor Speedway ROVAL was Keselowski’s worst of the playoffs, but he survived several spins and some late-race chaos to stay in the game.

In fact, if things had gone a little differently last weekend, Keselowski might have been able to steal a win and advance to the championship race.  Credit Keselowski and Team Penske for a commendable final run through the postseason with the odds stacked against them.  Keselowski will be a great asset as an owner/driver at Roush-Fenway Racing next year.

On the other hand, Harvick had a more disappointing playoffs than expected.  The No. 4 team began the postseason with only two playoff points, which put them in a big hole right from the start.  Yet given Harvick’s history of winning playoff races and often challenging for titles under the current format, a lack of playoff points never really seemed like it would be a big deal for him.

However, Harvick’s feud with Chase Elliott and the fallout from their conflict at Bristol came to head at the ROVAL for both drivers.  Whether or not Elliott really did get in Harvick’s head and cause him to crash, only Harvick himself knows.  But the resulting 33rd-place finish, Harvick’s only postseason result outside the top 10, dashed his title hopes.

Aside from Harvick, most of the usual championship contenders over the last few seasons made deep playoff runs.  Despite some struggles in the Round of 8 races, Martin Truex Jr. was able to advance to the championship race for the fifth time in his career.  Note that Truex began the playoffs with 24 playoff points, two more than Kyle Busch and 11 more than Logano.  All three drivers have won at least one championship under the elimination-style playoffs, and all three had a bit of an up-and-down postseason in 2021.

But Truex’s playoff points from the regular season, and additional points from a playoff win at Richmond Raceway, proved decisive over some of the other perennial contenders.  Elliott, who began the playoffs with a fifth-best 21 playoff points, joined Truex and Hamlin in the final race.

On Sunday, like so many times before in 2021, nobody could defeat the fourth title contender, Kyle Larson.  As the regular season champion and five-time race winner, Larson began the playoffs with an overwhelming 52 playoff points, 28 more than his closest competitors.  Not that Larson ever needed those points, because he won five more races in the postseason, including at least one in every single round.

The No. 5 team’s only real scare was a bad race at Talladega, which did not matter a week later when Larson captured the checkered flag at the ROVAL.  Larson’s victory in the championship race capped off a dominant season for him, besting the field in wins, top fives, top 10s, and laps led for 2021.

This season demonstrated that wins and playoff points do matter under the current format.  Much like Truex in 2017, Larson was rewarded for his dominance.  The drivers who closely competed for the championship all had strong seasons overall, meaning fans should feel satisfied with how the 2021 Cup Series championship battle played out.

However, it must be noted that the real turning point of Sunday’s race was the final debris caution and pit stops that followed, both of which allowed Larson to retake the lead.  Before that happened, he was running last of the Championship 4 drivers and was watching the title slip away.  At that moment, no amount of playoff points or wins would have helped the No. 5 team.

NASCAR often prides itself on the length of its season and the challenges that drivers must face throughout the year.  Yet the biggest factor in determining a champion is still whatever happens in the final race.  As long as the elimination-style playoffs exist, they will continue to create scenarios where the championship prospects of the last four drivers can change in an instant, regardless of what they did in the first 35 races.  If one race has so much power to determine a season-long championship, do playoff points really matter at all?

Your last sentence sums it up precisely.

It’s been that way since 2004 when NA$CAR tried to arrange for the driver with the most wins to win the title because the winner in 2003 only won one real race. How has that worked out?

I remember Ryan Newman finishing 2nd that one year without any wins. Had he been able to beat Harvick that race, he’d have been a champion in the playoff system with only 1 win. Personally, I thought it would have been hilarious for Newman to finish 2nd that race (with a non-playoff driver winning) and be crowned Champion without any wins.

Even now a driver doesn’t have to win the last event. He only has to finish ahead of the other three. But NA$CAR does their best to insure that he wins.