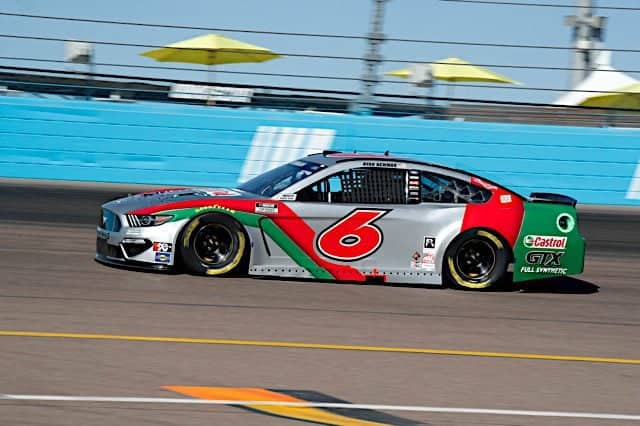 Almost exactly 21 years to the day, Ryan Newman made what could have been his final NASCAR Cup Series start at the same track where it all began: Phoenix Raceway.

Since late July, we’ve known Brad Keselowski will take over as driver of the No. 6 Roush Fenway Ford in a minority owner partnership, leaving Newman on the sidelines after 20 years racing full-time in Cup. Despite having a few months since that announcement, Newman’s future remains up in the air, though he wouldn’t talk about retirement when he met with media members assembled at Phoenix after qualifying on Saturday (Nov. 6).

“I’m not announcing any kind of retirement or anything like that,” Newman said. “I really just, I don’t have anything on paper for next year right now.”

Late during the 2000 season, Newman made his Cup debut behind the wheel of the No. 02 Alltel Ford, and he ran just 176 laps before an engine failure sent him to a 41st-place finish. The following season, he made just seven starts but scored a pair of top fives, a fifth at Michigan International Speedway and a second at Kansas Speedway.

The following year, Newman joined the Team Penske organization full-time and remained there through 2008, scoring 13 wins (including the 2008 Daytona 500) before departing for Stewart-Haas Racing to drive the No. 39 Chevrolet. He scored four wins with SHR over five seasons, highlighted by the 2013 Brickyard 400 at Indianapolis Motor Speedway.

For 2014, Newman made the jump to Richard Childress Racing where he remained through the end of the 2018 season. In his first year with RCR, he finished a career-best second in the championship standings to Kevin Harvick. However, the overall tenure was a bit disappointing for Newman. He visited victory lane just once and finished outside the top 10 in the standings for all but his first year with the team.

For the last three seasons, Newman has driven the No. 6 Roush Fenway Racing Ford, failing to win a race or go deep in the NASCAR playoffs. His best season statistically came in 2019 when he scored three top fives and 14 top 10s en route to a 15th-place finish in the championship standings.

On Sunday, the veteran’s Cup career came to a close as he started 19th in a season that’s been a struggle, to put it lightly.

Thanks for the memories, Ryan. pic.twitter.com/r9WR7dapMF

He ended the year 28th in the points standings, the worst since he began his full-time career in 2002. But was Sunday’s season finale Newman’s final Cup start?

Says he doesn’t care if the future holds a part of full-time opportunity. He just wants to win again. #NASCAR pic.twitter.com/tyoDayb3PX

Simply put, there isn’t an answer to that question… yet. Unfortunately, the statistics on Newman’s last two seasons don’t point toward a hopeful future when it comes to a top-tier ride. After all, the last two years have seen Newman finish 25th and 28th in the standings, respectively. Additionally, he posted a combined two top fives and seven top 10s over 69 races (he missed three last season after his scary last-lap crash in the season-opening Daytona 500).

“I still enjoy doing what I’m doing. But in the end, I can’t be happy running 25th or qualifying 30th or racing for a lucky dog. That just doesn’t do it for me.”

While we’ve seen multiple drivers whose Cup careers put up less-than-stellar numbers drop back to race in the Xfinity or Truck series, it’s unlikely we’ll see Newman do the same. He considers “those series as minor leagues” though he stopped short of completely shooting down the two lower-tier series as an option.

“The focus has always been on Cup and I still consider those (trucks, xfinity) Series as minor leagues and I consider myself a major.”

Keselowski, at age 37, isn’t too much younger than Newman is. However, he comes with the added appeal of ownership in the organization, Roush’s likely heir apparent. For Newman, though, he’s ultimately getting shuffled out of the series as the younger generation begins to take the reins, driving the new Next Gen car in 2022.

“What’s happening to me is what I watched happening to Sterling Marlin and Bobby Labonte and Terry Labonte and Kyle Petty and Rusty (Wallace) and a few other guys who had grown through other generations of cars,” he said. “Eventually, it was the end of their careers.

“Back in that day, the transition (to younger drivers) was happening with myself and Jimmie (Johnson) and Kasey Kahne and (Greg) Biffle and (Matt) Kenseth and Kurt (Busch). It was evident that it was just a cycle, and it was going to flip-flop again.

Only time will tell whether Newman will pick up a ride for the 2022 season and whether he’ll “settle” for something in the Xfinity or Truck series if the offer comes along. But at 43 years old, Newman’s made one point perfectly clear: he’s not going to race just to race.

Without a realistic opportunity to win, you won’t see him agree to get in a car going forward.

I’ve always liked Newman, although I never really thought he would be a Champion. I did expect him to win more races than he has. I would like to see him win a couple more before bowing out.

One of the funniest things I remember was a quote from Kyle Busch. He and Newman had a run in on track, and in an interview a while later (weeks, maybe a season or two later, I don’t remember) he made a comment when asked about it, “Ryan’s a giant ogre so I couldn’t really do anything about it.”

A really nice article. Ryan Newman was my first driver I supported NASCAR and grew up with. I remember the year he earned the name rocket man, and the year he had so many wins driving that Dodge. He was my absolute favorite driver and remain so through the years. It’s kind of sad to grow up with your favorite driver and then see them slowly fade. I don’t know if it was the Daytona accident that changed him, or the cars at roush not being up to par. But it’s clear he isn’t the same driver he once was. It’s more sad knowing how hard he tries and wants to win. He’s had a good career and it would be sad to see him leave like this, but I hope he knows there’s no shame as well running in other leagues such as the trucks or Xfinity. He can be a mentor to a team as well hoping provide good information to new drivers. Nonetheless thank you Newman. I guess we both grew old together.

He landed at Roush when they were in freefall from being a powerhouse, to an also ran. But all of his performance can’t be all blamed on the cars. His best option would be if they would field an open car for the superspeedways for him. But that would likely be a one year deal. No one likes being forced out, but it comes to most, unless they make the decision first.

I imagine Newman has gotten calls from back marker teams like Spire and Rick Ware Racing (“Ryan, just go find yourself a $5M sponsor, bring them to us and we will run you next year…”), but I’m also sure he turned them down. Meanwhile, the truly competitive rides are filled with mostly younger drivers under multi-year contracts.

If Ryan and Tony Stewart have buried the hatchet, maybe Ryan can go have some fun running in Tony’s SRX series?

Good luck Neman! I’m scared Keslowski is going to find that RFR is only a balance sheet organization.

I remember when the press was hot after Pearson about his retirement status, he said ” well you never get tired of winning , or thinking you’re capable of winning” – it’s hard for most drivers at any level or sanction to retire. It’s a strong drug indeed. Best wishes to Newman, he’s a great guy.