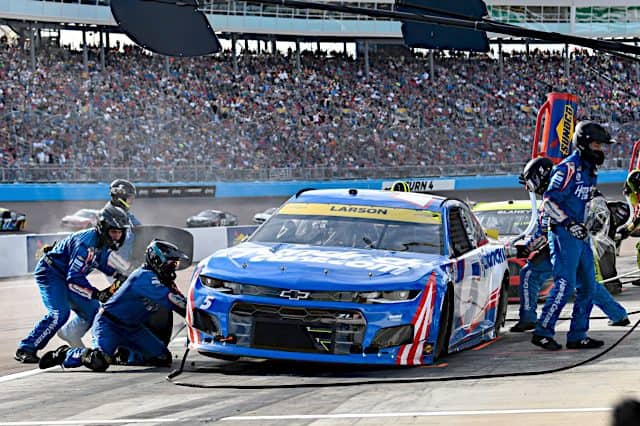 PHOENIX — When the caution flag came out with 64 laps to go at Phoenix Raceway, Kyle Larson found himself in a predicament.

Fellow Championship 4 driver Martin Truex Jr., who had proven his strength on the long run, caught a lucky break by being on pit road when Anthony Alfredo slammed the turn 2 wall, and the No. 19 was able to cycle to the lead.

Larson was running third before the caution behind his other title competitors, Denny Hamlin and Chase Elliott. He exited pit road behind them, but worse was that he lost a spot to Joey Logano. Factor that Ryan Blaney also stayed out and suddenly Larson found himself sixth on the restart.

Larson’s No. 5 Chevrolet was a rocket all race on the short run, but suddenly it was stuck — stuck in dirty air in the middle of the top 10, unable to move any farther up the leaderboard than fourth behind the other title contenders.

That was until another caution came out with 30 laps to go, a debris yellow displayed after a brake rotor exploded off David Starr’s No. 13 car.

The HendrickCars.com Chevrolet entered pit road fourth and rocketed out with the lead, a gain of three spots thanks to a stellar 11.8-second stop, according to NBC Sports, that gifted Larson the track position he needed.

The title-deciding pit stop.@KyleLarsonRacin's final pit stop was @TeamHendrick's fastest of the season as an organization. #NASCAR pic.twitter.com/soNEwHUcw6

He took that track position and launched into elite status Sunday (Nov. 7), charging to the lead and holding off Truex for the 2021 NASCAR Cup Series championship and 10th win of the year.

His 10th win of the season is the biggest of his career! pic.twitter.com/nloOjUQePh

“It all came down to the final pit stop,” crew chief Cliff Daniels said. “And I have always pushed our guys so hard back at the shop, the guys working on the car, the guys pitting the car, and to see them shine in a moment where they could shine I think is just incredible.”

The moment belonged to the over-the-wall crew, perhaps most fittingly in the last race featuring five-lug tire changes in the NASCAR Cup Series.

With NASCAR’s shift to the Next Gen car in 2022, wheels will switch to a single lug, changing the focus and perfected choreography of the pit stops we’ve seen for decades. In this era’s swan song, the championship was in large part determined by a perfect ballet.

That was no accident, Daniels clarified, pointing to a tremendous amount of work that has gone into bettering the company’s pit crews.

“I think Mr. H (team owner Rick Hendrick) looked at where our pit crews were the last couple years and he kind of tasked all of us with improving over-the-wall performance,” Daniels said. “Of course we needed to improve car performance, needed to improve in every area. And the crew chiefs, Chad Knaus, a lot of guys, we all spent time really trying to refine our pit crews and keep pushing them the way we practice.”

See also
One For the Road With Brad Keselowski

Cliché as it may be, it was the ultimate team victory. Larson’s talent was historical this season, proven in every and any discipline of racing he found himself in on any given night. But after being mired in traffic with an imperfect race car, Daniels processed Larson’s feedback to make the proper adjustments, and the crew executed every responsibility laid upon it to perfection.

“That whole run when I restarted sixth and got back to fourth there, I was just too free off to apply the throttle like I needed to,” Larson said. “But you go out in clean air after we had the pit stop — I still had a sort of similar balance to that, but maybe Martin’s balance wasn’t quite as good in that short little run. Clean air or just track position really is important.”

The relationship between the members of Larson’s team is unlike any Larson experienced at Chip Ganassi Racing, his only other home in the NASCAR Cup Series since joining the sport in 2014. A 10-time winner this season, Larson points the credit solely to Cliff Daniels.

“Before, when I was at Ganassi, I was never a part of like the pre-team kind of meetings and stuff with the pit crew and all that,” Larson said. “And I love being a part of that and seeing and kind of going over the race strategy with everybody and seeing them at the shop. I go to the shop more often, a little bit, and get to see their prep that goes into stuff.

“He does a great job leading this team and keeping us all close. It’s easy a lot of times for the driver, I feel like, to be distant from everybody, just the way that schedules are and all that, but I feel like I’m closer to my team than I’ve ever been with any other team.”

Daniels was thrust into the role of Larson’s crew chief off the heels of working as Jimmie Johnson’s final crew chief, a driver he was familiar with since working under Chad Knaus on the No. 48 team when Knaus led the charge.

Success was infrequent with Johnson, whose career was on the decline once Daniels took over the top job, but the duo ended with a fifth-place finish in the 2020 season finale at Phoenix.

Whatever lessons Daniels learned in that time have clearly paid tremendous dividends. While he credits Larson’s feedback as the ultimate catalyst for bringing optimal performance out of the vehicle, Daniels is the one processing and analyzing that information, ultimately calling out the necessary adjustments to allow Larson to be this generation’s top talent in a Cup Series car.

What he’s learned, he said, is to trust his own racing experience. When the caution flag flew just six laps into the race, Daniels brought the No. 5 car for fuel and tires. He was the only crew chief to call his driver to pit road at the time and set Larson back to restart deep in the field.

“But I knew — I knew — I knew from looking at the lap times, from lap 1 to lap 5, the field had already fallen off one to two tenths already on lap 5 or 6. So yes, we were alone as being the car that pitted, but that is an example where I knew, I knew, because we had studied it all week long at a situation like that, to go ahead and take the tires. And then if the caution comes out later, you stay out and you get your track position back, which we did. Or if the caution doesn’t come out, you restart 25th, which we did. And I was pretty confident we were going to drive back up, just because of the tire life difference, drive back to the front.”

That confidence, combined with Larson’s exceptional ability, the pit crew’s competence and Daniels’ planning, culminated in the first Cup Series championship for one of the world’s premier drivers.

It’s been said plenty before, but Larson is the real genuine deal. It’s really nice to see his pit crew get some props as well. Kudos for listing their names, Zach. They won this championship too.

Kyle Larson’s racing achievements this year are something that may never be done again, except by Larson himself. It was impossible to even have the opportunity to do these things back in the day, because of the restrictions. In time, Kyle may be included with Mario and AJ as one of the GOAT.

I read that Newman is being touted as HOF material with his 18 wins over 22 years. So should Kyle’s 16 wins and championship put him in that same discussion now.

Come on, it;s obvious that anyone that wins a championship will end up in the HOF or they are going to run out of drivers. So, YES, I’d bet the farm that Larson will be in the HOF. He probably needs to double his win amount to be a first round inductee.