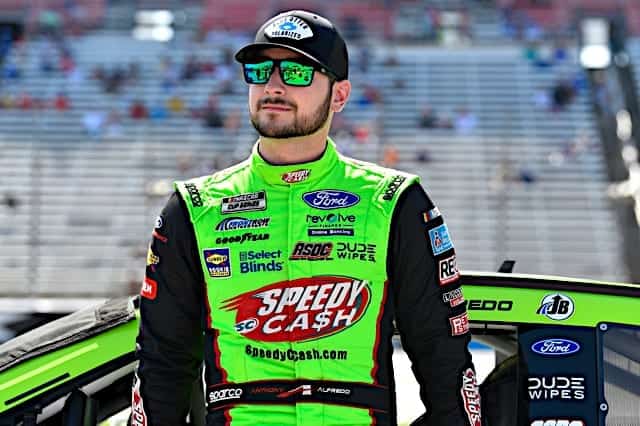 Anthony Alfredo will not be returning to race with Front Row Motorsports for the 2022 NASCAR Cup Series season. The race team announced the news in a Tuesday (Nov. 9) press release.

“We would like to thank Anthony for being an outstanding ambassador of our team as well as for our No. 38 partners,” General Manager of FRM Jerry Freeze said in the team’s statement. “He showed a lot speed in what was very difficult circumstances. He is a true professional and we wish him nothing but success in his future racing endeavors.”

Alfredo earned his first and only career Cup Series top 10 at Talladega Superspeedway in the fall, scoring a 10th-place result.

The team also announced that while Alfredo will not be piloting the No. 38 Ford in the Cup Series in 2022, it still has plans to field both of its Cup Series teams in 2022. No indication was given whether 2021 Daytona 500 Champion Michael McDowell will return to the No. 34.

Additionally, FRM has yet to announce Alfredo’s replacement in the No. 38 for next year.

The team also mentioned in the release that it is still analyzing its Truck Series operation that fielded series regular Todd Gilliland full-time in 2021, and has yet to decide if it will compete again in 2022. Gilliland earned the team its first series win in 2021, coming at Circuit of the Americas in May.

He will be missed !

And its such a big surprise!

NOO FAST PASTA!!!!!!!!!!!!!!!!!!!!!!!!!!! Straight up i was so sad when i found this out. So many good drivers leave this year! Quin Houff, Ryan Newman, Anthony Alfredo, Cody Ware, Josh Bilicki, James Davison, Jamie McMurray, Kaz Grala, Matt DiBenedetto! Jesus this is insane.

Insane no, about time, yes.