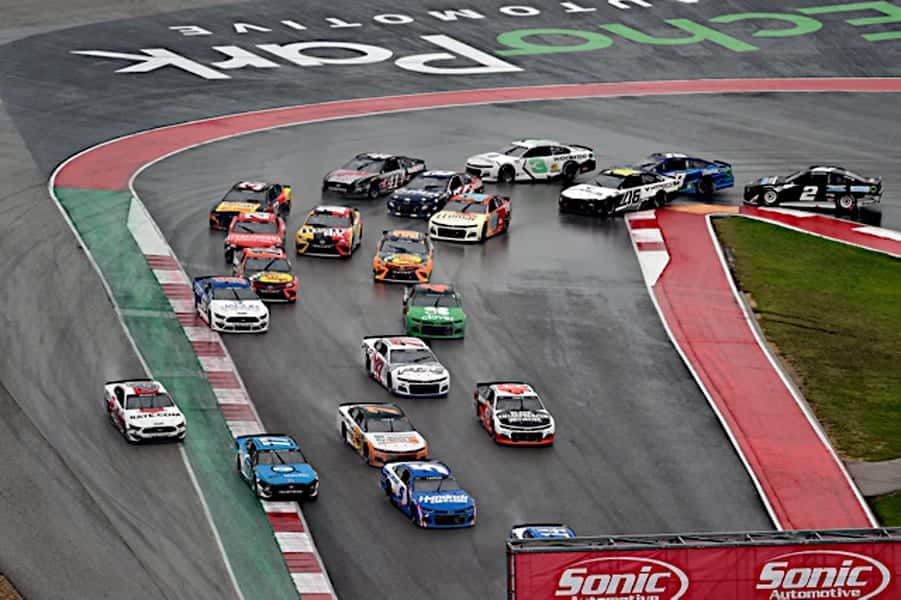 Leading up to the Daytona 500, we were all told by FOX Sports that the 2021 NASCAR season would be the best one ever. Now that we’re at the end of it (hard to believe, am I right?), it’s now our turn to analyze and reflect on everything that the season gave us.

From big crashes to heated feuds, hurt feelings and joyous victories, this year provided us with plenty of shock-and-awe moments to talk about for years. Was 2021 really the best season ever? Well, that can be open to interpretation. But due to these factors, I believe it should at least be ranked among one of the best of all time.

This year brought us a bigger influx of drivers that changed the complexion on the grids of NASCAR’s three touring series.

Bubba Wallace and Jesse Iwuji led the charge for the Black community, while Hailie Deegan, Natalie Decker and Jennifer Jo Cobb were the main torchbearers for female drivers on the grid. Armani Williams broke through as NASCAR’s first outspoken driver on the autism spectrum, Devon Rouse gave the LGBTQ community their first on-track showing since 2003 and there are also drivers like Gracie Trotter, Toni Breidinger, Rajah Caruth and Nick Sanchez who are anxious to step into NASCAR waters in 2022 and diversify the roster even more.

Sixty-one total drivers made their debuts in at least one NASCAR series (16 in NASCAR Cup Series, 17 in NASCAR Xfinity Series and 28 in Camping World Truck Series). That’s a high total to shoot for. But considering the amount of young guns and old veterans in other racing series that exist out there, the odds of it happening again are pretty good.

In one of the most expansive schedules in modern history, NASCAR really pushed the envelope with discontinuing some tracks and bringing along new ones.

Gone were Kentucky Speedway, Chicagoland Speedway, Auto Club Speedway (it’ll be back in 2022), Iowa Speedway and Canadian Tire Motorsports Park. New to the Cup schedule were Circuit of the Americas, Nashville Superspeedway and the Indianapolis Motor Speedway road course, while Road America returned for the first time in more than 60 years. The Truck Series brought back Watkins Glen International and went to Knoxville Raceway.

Some of these new places had successful weekends, while other venues had more disappointment than elation. But at least NASCAR’s willing to test the limits and see what new tracks fans will favor in the future.

See also
Waid's World: NASCAR’s 1st Time in New York Was an Adventure for Many, To Say the Least

With the plethora of new additions and changes made to the 2022 schedule already, like the Busch Clash at the L.A. Coliseum, the 2021 season serves as the first real taste of how far NASCAR is willing to stretch with their venue choices for their top three touring series. We’ll just have to wait and see how far it goes from here on out.

Crashes are inevitable in the sport of auto racing, big or small. And this year was no different.

We’ve seen many drivers take some serious hits this year and are thankful that they didn’t turn out to be worse than they could’ve been for the drivers involved. Like Joey Logano’s frightening blowover at Talladega Superspeedway, the final-lap Big One in the Daytona 500, Martin Truex Jr.‘s and Cole Custer’s violent, limited-visibility collision at COTA or the entire Indianapolis road course curbing fiasco.

There were significant victories scored along the way that helped make 2021 so special.

2021 was certainly a year for first-time winners. The Cup Series had three first-time winners in Wallace, Michael McDowell and Christopher Bell. Six of the same breed visited an Xfinity Series victory lane: Ty Gibbs, Myatt Snider, Josh Berry, Jeb Burton, Brandon Brown and Daniel Hemric all made trips to the winner’s circle in NASCAR’s secondary series. And four did so in Trucks, consisting of Ryan Preece, Chandler Smith, Christian Eckes and Tate Fogleman.

McDowell’s dramatic Daytona 500 win ended the second-longest drought between a driver’s first start and maiden Cup win, capping the streak at 358 races. Gibbs’ and Preece’s victories came in their respective debuts in the Xfinity and Truck series. Wallace’s win at Talladega was monumental for the Black community, becoming the first such driver to do so since Wendell Scott in 1963. And Hemric became the first NASCAR driver to score his first win and claim the championship at the same time.

Hendrick Motorsports claimed a whopping 17 wins out of the 36-race Cup season, including a 1-2-3-4 performance by the team at Dover International Speedway in May. But Kyle Larson’s 10 wins is most worth mentioning, because not only did it help him win his first championship, but he helped propel Hendrick Motorsports to even greater dominance by doing so.

From feuds, fights, tangles and hold-your-breath finishes, the 2021 season is the most drama-filled one that I can recall.

Hemric’s and Noah Gragson’s post-race game of fisticuffs at Atlanta Motor Speedway was the early season bar-setter for how physical drivers can get when emotions run high. Not long after that, there was Joe Graf Jr. vs. Gray Gaulding at Martinsville Speedway. Fogleman vs. Deegan at Richmond Raceway. Berry vs. Ferrucci at Phoenix Raceway. Chase Briscoe vs. Denny Hamlin at Indianapolis. Heck, even Larson’s tire vs. Pocono Raceway could count. And who could forget AJ Allmendinger and Austin Cindric’s wild 1995-esque finish at Bristol Motor Speedway?

The playoffs had even more altercations in store. Chase Elliott and Kevin Harvick exchanged words at Bristol. Then, at Martinsville, several Truck drivers expressed upset emotions with each other, culminating in crew chiefs Junior Joiner and Tripp Bruce unleashing expletives on one another. On the Cup side, Hamlin and Alex Bowman stole the post-race show, with Hamlin’s memorable interruption of Bowman’s victory burnouts. On championship weekend, Hemric and Cindric slammed their way to the finish line, with Hemric getting the victory and championship by mere feet.

Whether 2021 is considered to be the best season ever or not, it was one for the ages. With drivers taking big risks on the track every week and constantly creating so much drama and calamity, 2021 will be a hard one to beat. Just three more months until the show begins again. Until then, have a good offseason, folks.

Regarding the New Faces section:
Explain how Bubba, Natalie and Jennifer are new. I’m pretty sure this was not their first year racing in the top three series. But of course that was not the agenda of this section of the article, was it?
That said, I do look forward to more diversity, regardless of whether they are competitive or not. Promote Deegan to Cup right now!

Now bubba is new too ? he’s an underdog and new.

Yes, I could’ve titled it better. But the goal was to simply showcase all the different backgrounds and communities that some drivers come from, and how that diversity will likely increase moving forward.

I enjoyed the season. Plenty of passion and competitiveness on display this year. Some great finishes, too. And even though Larson had a heck of a season, it was nice to see him punctuate it with a win in the championship race. With next season being a real unknown, we better appreciate the one that just ended.

I like all the new places. I want to see NASCAR rotate the tracks more often. But I also don’t want to see them abandon old tracks. One year they can go to tracks A, B, C, D and the next year they go to E, F, G, H, and the following year A, C, F, H. Make sense?

Bubba running for rookie of the year next year. Run with that Jesse.