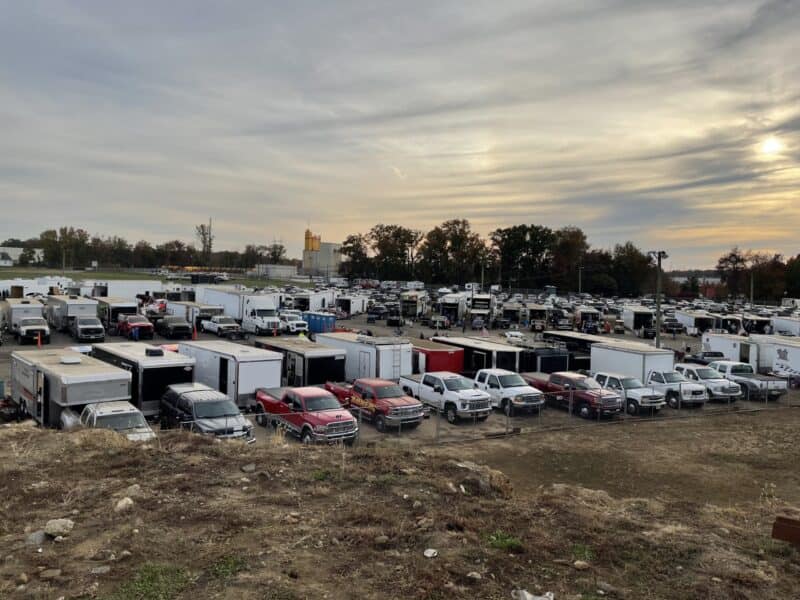 NASCAR’s Cup Series Championship Race in Arizona went green at approximately 3:34 p.m. ET on Sunday. On the other side of the country, 2,372 miles away in Swedesboro, N.J., I was standing in line to buy a pit pass at the Bridgeport Motorsports Park for the conclusion of the High Banks Classic at that time.

That’s 2,372 miles between big-league NASCAR and grassroots dirt racing. And it felt like every bit that distance.

I didn’t make the trek to Bridgeport Sunday afternoon just to avoid NASCAR’s season finale. I had more personal reasons for making the trip: my visit to the track Sunday marked my 100th lifetime racetrack. I’m coming for you Ken Schrader.

But truthfully, given the storyline unfolding in Phoenix over the weekend, at least in the Twitter ranks, there were ample reasons to steer clear of NASCAR’s championship weekend. Case in point, Friday’s (Nov. 5) broadcast of the Truck Series finale was widely lambasted for FOX’s production choices.

what is it with NASCAR announcers and terrible win calls

It just so happens that my first destination at Bridgeport was the perfect antidote to such issues. A legitimately high-banked dirt oval, the only options to watch racing on-track from the pit area is to head into the frontstretch grandstands, or to climb the hill in turn 2. Scaling the hill, I had to rely on the cues of the grandstand crowd to know when to take my hat off for the national anthem, as the PA didn’t reach that far across the track.

I watched the entirety of heat races from that hill, despite having an obstructed view of turns 1 and 2, with no announcer or commentary of any kind. Even the scoreboard wasn’t visibly from my vantage point. None of that mattered. The twitchy, boxy center-drive modifieds didn’t need anyone to explain what was happening with them.

I wrote over a year ago describing how the isolation that grassroots tracks provide, with limited reception and/or technological amenities, brings racing back to a desirable place, a test of man and machine, nothing more. I’m a bad Southerner for saying this, but I was in my happy place in industrial New Jersey.

After heat races concluded, I went back down the hill to do my pit walk, taking a couple laps around the haulers, pickups and open-faced trailers that dotted the area below the banks of turns 1 and 2.

As tempting as it was to go back up the hill for the feature events, no trip to a racetrack is complete without a trip to the concessions stand. Another reminder of the 2,000-plus mile gap between Phoenix and Swedesboro. Take a look at Chase Cabre’s observation from Phoenix Raceway.

I will admit I remembered this tweet when I went to get food, so I gave myself $19 to spend as an experiment. That $19 landed me two decent-sized hamburgers. And a pizza slice big enough to actually fold. And a 20-ounce drink. And that still left me with a single to put in the tip jar for the lovely ladies working concessions on Sunday. There’s something very wrong with any racetrack where a hot dog and fries costs more than the average ticket.

Let’s give a shoutout to whoever designed the Bridgeport Speedway, because the grandstand seating was the most pleasant surprise of the day. Even sitting a handful of rows from ground level, the entirety of the track surface was visible. Best of both worlds, having a seat that can see the whole racing surface while being close enough for the ground-pounders to shake your chest.

If I had to compare it to another venue, it’s surprisingly similar to the asphalt Toledo Speedway, be it in terms of banking, low retaining walls to allow for maximum visibility and a general sensation of speed. Anyone that’s read my ARCA columns in years past knows that comparing any track to Toledo is a high compliment in my book.

Let’s get to the feature races. The 4-cylinders went first this Sunday (Nov. 7), and it was a race that would have given NASCAR President Steve Phelps a coronary. The race was won by a car numbered No. 2A, carrying the colors of a Second Amendment advocacy group. Also in the field was a No. 01 entry painted exactly like the General Lee. Though I will concede I’d share Phelps’s outrage at that car … it truly is blasphemy to put that paint scheme on a Chevy Cavalier.

All of that that has nothing to do with racing was mercifully absent nowhere to be found at Bridgeport. The 4-cylinder feature winner celebrated in victory lane, took pictures with the family, and moved out of the way for the modifieds to do their thing.

What I noted was also absent, surprisingly so, was any sense of connection to, or interest in, the NASCAR season finale unfolding out West. Remember those pit walks I took? A full100% of the haulers in the garage area that had TV screens in them were not tuned into Phoenix. Rather, they were all dialed into Flo Racing’s coverage of the Bridgeport race program. Remember that hill I stood on in the pits for heat racing? There wasn’t a single person on that hill checking their phone, period, much less checking into Peacock to see what the Cup guys were doing.

In fact, the first I heard anyone anywhere at Bridgeport reference Sunday’s Cup race was during the track prep intermission between the 4-cylinder and modified feature, with the PA announcer telling the crowd (after providing the score of the Philadelphia Eagles game) that Chase Elliott was leading Kyle Larson. The name Elliott elicited no reaction, Larson, a faint smatter of applause.

The only other reference I heard to NASCAR also came from the PA announcer during a red-flag in the Sportsman feature, at which point New Jersey-native Martin Truex Jr. had taken the lead. Even being in New Jersey, this news elicited only a brief spurt of applause.

It was a striking observation, especially given how much ink and media has been spent in 2021 stressing the supposed re-emerging connection between big-league NASCAR and grassroots short tracking. Quite the connection given that NASCAR added a whopping zero short tracks to their 2022 Cup schedule.

I honestly wonder if this connection is less a NASCAR thing and more a Kyle Larson thing. Though Larson was statistically less dominant in 2021 on dirt than he was in 2020, his success was more diverse this year, with Yung Money winning crown jewels in midgets (Chili Bowl), sprint cars (King’s Royal, Knoxville Nationals) and super late models (Prairie Dirt Classic). Even in Pennsylvania Posse country, Larson the Californian was roundly cheered by crowds at Port Royal and Williams Grove alike this summer.

Driving home from Jersey after the sportsman feature ended the night at Bridgeport, Larson was on the brain even before my dad texted to say that he had in fact won the 2021 NASCAR Cup Series finale race, err, championship. There’s no doubt in my mind that Larson will continue to be embraced by the dirt racing community from coast-to-coast whenever he decides to show up and race. His post-race party at the Knoxville Nationals spoke volumes as to what dirt race fans think of him.

“You guys are the greatest fans in the world. Here’s a toast to the Knoxville Nationals.”@KyleLarsonRacin speaks to a raucous crowd of chanting fans at @KnoxvilleRaces. pic.twitter.com/hvrjRVX6nf

But I also was left thinking about the supposed bridge re-emerging between the big leagues and the bullrings. Because if Larson, again, a generational talent, can’t elicit more than a murmur from a crowd during a season that saw him win 10 Cup races and nearly every discipline dirt racing has to offer (would LOVE to see Larson tackle a big-block next year), the question has to be asked … is there really a connection between the two?

I’ll concede my observations are hardly scientific. For all I know the thousands of DVRs at home for those in attendance at Bridgeport were all tuned to NBC.

But perhaps the most striking image of the day was standing in the concourse below my seat in the grandstands. An older man was standing in the concourse below my grandstand seat, opting to stand at ground-level and smoke as he took in the feature race. That man, standing with an obvious buddy of his, was wearing an old-school Dale Earnhardt No. 3 hat. Those two men never even looked up when the track PA provided updates on NASCAR’s unfolding finale.

I for one enjoyed every minute of my time at Bridgeport Sunday, even crunching on dirt between my teeth for the entirety of the drive home and pouring a bulldozer’s worth of dust out of my sweatshirt’s hand warmer when I got home. The battle mid-race in the modified feature between Ryan Godown and Craig Von Dohren was well worth the price of admission.

But whether races like the High Banks Classic at Bridgeport are for you or not, NASCAR and the dirt track felt every bit of 2,372 miles apart on “championship” Sunday.

Bryan ol’ buddy, you need to let me know next time you’re in Bridgeport…that’s just a half hour from my home. (And incredibly, I have never seen a race there.)