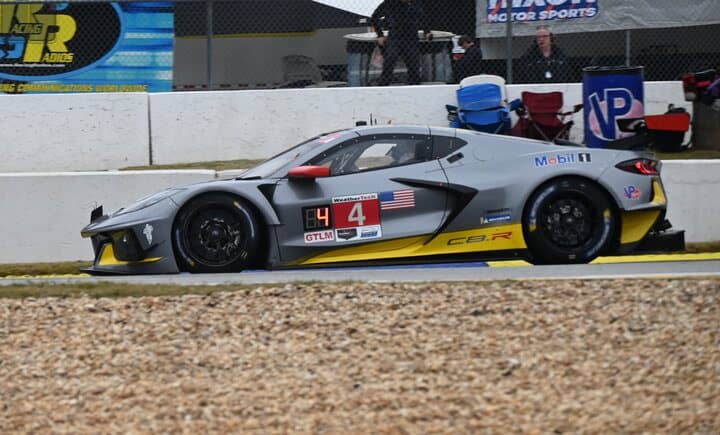 In IMSA, Corvette Racing will run one Chevrolet Corvette C8.R in the IMSA WeatherTech SportsCar Championship’s new GTD Pro class. The C8.R will be modified in order to fit the rules of the class and be balanced properly with the GT3 cars. Antonio Garcia and Jordan Taylor will continue to share the No. 3 Corvette full-time. Nicky Catsburg will return to the team for the endurance events at Daytona, Sebring and Michelin Raceway Road Atlanta.

“I’m super excited to be coming back to IMSA,” Taylor said in a statement. “Obviously going to a new class with more cars and more competition will be exciting. There is a lot to learn for us at Corvette Racing to help with the transition, but the team has so much experience over the years in GT racing that I’m confident we can adapt well. We’ve done some testing behind the scenes already with the car to understand where we are and what we need to work on. So far, so good. It’ll be great to be back with Antonio [Garcia] and Nicky [Catsburg]. We’ve had two great years in a row, and hopefully we can make it three in IMSA.”

The current No. 4 Corvette will move over to Europe and compete full-time in the FIA World Endurance Championship using the No. 64. That car (pictured above) will continue in current spec with Tommy Milner and Nick Tandy driving. Alexander Sims will join in for Le Mans. The current plan is for both cars to run at Le Mans in full GTE spec.

“It’s an exciting and new challenge to do a full season in WEC,” Milner stated. “As the decisions were being made, I was asked my preference of what I would like to do for 2022. I’ve obviously enjoyed every single year that I’ve been in IMSA with some amazing tracks and events. But the opportunity to race at some other famous and storied circuits – ones that I’ve never been to – in a Corvette and in the WEC is amazing.  The constants of the car, the Michelin tires and having Nick [Tandy] as a teammate are all great benefits. We got a look at what it’s like to race in a normal WEC race when some of the team raced at Spa last year. Having that experience and knowledge will be beneficial for 2022. Personally, I’m thrilled for this.”

The retrofitting of the Corvette C8.R is not meant to be a permanent move. Chevrolet is developing their first fully fledged GT3 challenger, the Corvette Z06 GT3.R. This car will share a number of aspects with the production Corvette Z06. The car will use the same aluminum chassis that the street car off the assembly line in Bowling Green, Ken. will use. The 5.5-liter LT6 V8 engine in the car will be a modified version of the production engine.

“It’s an exciting time for Corvette – first with the reveal of the production Z06 and now confirming the Corvette Z06 GT3.R for customer racers,” said Mark Stielow, Chevrolet’s director of motorsports competition engineering. “The availability of the Z06 GT3.R will allow customer race teams the opportunity to campaign a Corvette that has benefited from Corvette Racing’s rich history.”

In addition, this car will not be built just for Corvette Racing. It will be a legitimate option for customer sales around the world in various series that race GT3 cars. In the United States, those series are the IMSA WeatherTech SportsCar Championship’s GTD Pro and GTD classes, SRO America’s Fanatec GT World Challenge America Powered by AWS, GT America Powered by AWS and Trans-Am’s XGT class.

By 2024, there will be likely be the better part of a dozen choices for teams to make in regards to what GT3 car to race. Porsche is already developing a new 911 GT3 R based on the 992 generation. BMW debuted their new M4 GT4 in iRacing before the competition debut in the Nurburgring Endurance Series (formerly VLN) earlier this year. It will debut in IMSA in 2022 with Turner Motorsport. Audi, Mercedes, McLaren, Lamborghini, Lexus, Aston Martin, Acura and Mercedes would have eligible cars. There’s also the possibility of more manufacturers joining the fray.

The move comes as the sentiment around General Motors’ previous GT3 car, the Cadillac ATS-V.R., was rather negative as far as the SRO was concerned. The Cadillac ATS-V.R. was a fully fledged GT3 car, but it was produced solely for Cadillac Racing in what was then Pirelli World Challenge’s GT class. No customer cars were ever made available for purchase. When Cadillac Racing went away, the factory refused to allow the cars to be sold. As a result, the ATS-V.R.’s racing life was brief and extremely exclusive, more or less the antithesis of what the GT3 class was designed to be.