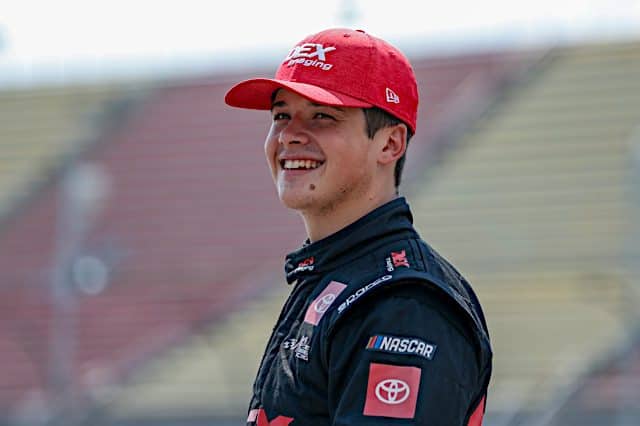 Brian Wilson will call the shots atop Harrison Burton‘s pit box in his rookie season in the NASCAR Cup Series in 2022, Wood Brothers Racing announced Nov. 11.

Wilson moves up to Cup from the NASCAR Xfinity Series, where he’d been Austin Cindric‘s crew chief at Team Penske, his tenure including a title-winning 2020.

Wilson has worked as a crew chief with Penske’s Xfinity team since 2016, leading the organization’s cars to 23 wins. He also filled in as crew chief for Brad Keselowski in the Cup Series in 2017, during which stretch Keselowski scored three top fives and four top 10s.

Burton is also moving up from Xfinity, having driven the No. 20 for Joe Gibbs Racing the past two seasons.

Wilson takes over from Jonathan Hassler, who served as the No. 21’s crew chief for the final two thirds of the 2021 season with driver Matt DiBenedetto. Prior to Hassler, Greg Erwin had called the shots for the team.

I wonder why he hasn’t gone back to the Beach Boys. Is he still looking for good vibrations with Rhonda?

He must have lost a bet. For the first time since Elliot Sadler and Michael Waltrip, the Wood team will suffer from lack of talent but he has name recognition and a father who will be a shill for him when NBC takes over.
Hopefully, Penske and the Wood family will move on to someone else in due time.

He just turned 21. He has talent, he’s shown that. I can’t believe you put him in the catagory of Waltrip and Sadler !!! Roger doesn’t do favors when it comes to business.