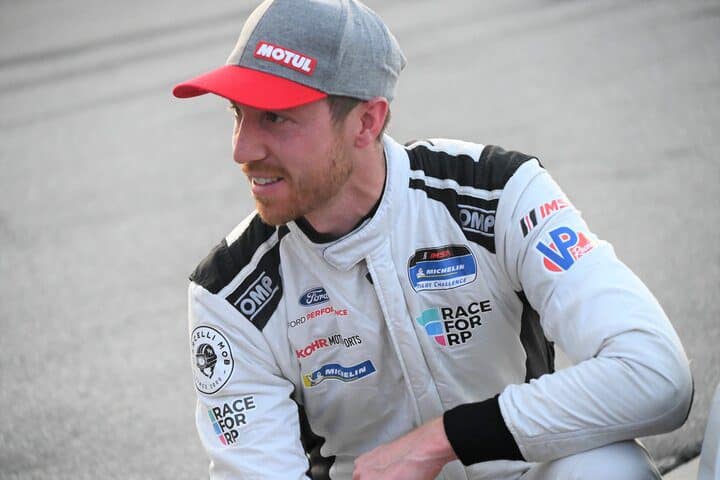 BRASELTON, Ga. – KohR Motorsports is entered for only the second time all year with their Ford Mustang GT4.  Despite a crash back at Daytona in January, Kyle Marcelli proved that the car is still quick after winning the pole Thursday (Nov. 11) for Friday’s FOX Factory 120 with a lap at 106.422 mph.

Normally, winning a pole for a race is excellent.  It gives you a lot of momentum for the race.  KohR Motorsports’ situation this weekend is a little different.

“So far, so good.  This was a bit of a test and tune event for us,” Marcelli told Frontstretch after the session.  “We came in never planning to do the race, just the practice and qualifying sessions.  This car was last [raced] at Daytona, the first race of the year and we had a crash that weekend.  [The car’s] rebuilt and the competition is getting stronger and stronger in this series, so we just wanted to…see where we’re at as a team and where the car is at.”

What does that mean for KohR Motorsports on Friday?  It’s somewhat unclear.  Marcelli says that he doesn’t know if the original plan will change as a result of their success Thursday.

Marcelli’s lap is not a track record.  It is two-tenths of a second slower than the pole lap that Akhil Rabindra turned in for Automatic Racing in 2019.  Marcelli’s lap was nearly a quarter of a second faster than Murillo Racing’s Kenny Murillo, who is continuing to race in place of the injured Jeff Mosing.  CarBahn Motorsports with Peregrine Racing’s Nolan Siegel was third in his Audi, followed by Wright Motorsports’ Ryan Hardwick.  TeamTGM’s Hugh Plumb will start his Chevrolet in fifth.

In TCR, Bryan Herta Autosport continued their dominance of the leaderboard.  Ryan Norman, who was quickest in practice on Wednesday, claimed the TCR pole with a lap at 103.893 mph, good enough for 12th overall.

“It’s been fantastic,” Norman told Frontstretch.  “We knew that we had a good car [and] a good foundation.  We’ve just been making small tweaks and modifications [to the car] each session.  We’ll adjust for the conditions since it’s going to be a lot hotter tomorrow, but the car’s been amazing and I’m really excited for Hyundai.”

Norman’s lap was more than four-tenths of a second faster than teammate Harry Gottsacker.  Copeland Motorsports’ Tyler Gonzalez qualified third in class, then New German Performance’s Cliff Brown.  Michael Johnson in his own Hyundai serviced by Bryan Herta Autosport will start fifth in his Veloster.

The only team that did not register a time was Van der Steur Racing’s No. 19 Hyundai Veloster N TCR.  This team crashed during Practice No. 1 on Wednesday.  The team has not officially withdrawn from the race, but a quick check of where the team was parked in the paddock revealed nothing there.

The FOX Factory 120 is scheduled to go green at 1:10 p.m. ET Friday afternoon.  The race will be streamed live on NBC Sports TrackPass.  Delayed and highlighted coverage of the race can be seen Nov. 23 at 1 p.m. ET on NBCSN.