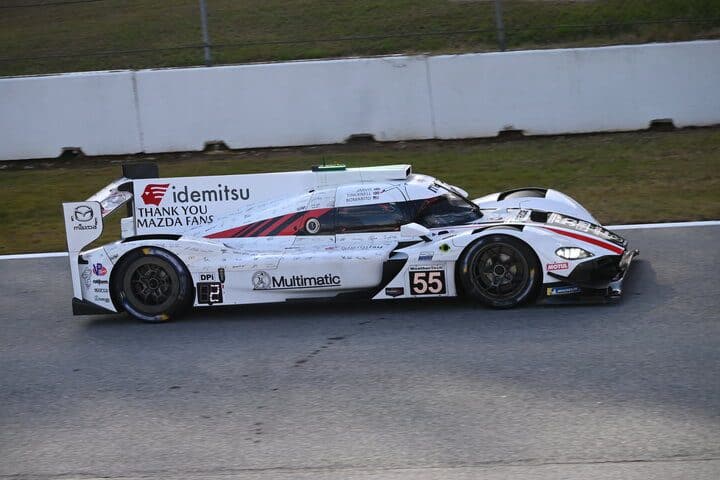 In the morning practice session held under gray skies, Action Express Racing’s Felipe Nasr was quickest with a lap at 131.553 mph.  The lap was set 25 minutes into the session.

Nasr’s lap was a quarter of a second faster than Chip Ganassi Racing’s Renger van der Zande.  Meyer Shank Racing with Curb-Agajanian’s Dane Cameron was third in his Acura, followed by Kamui Kobayashi in the Ally Cadillac No. 48.  JDC-Miller MotorSports’ Loic Duval was fifth.

Mazda Motorsports’ Jonathan Bomarito was at the bottom of the class in his Mazda RT24-P.  However, the car ended up stalling on-course in turn 8, drawing the first red flag of the session.  The car did not return after being towed to the top of the hill overlooking the frontstretch.  From there, Bomarito coasted the car back to the pit.

In LMP2, Tower Motorsport by Starworks’ Gabriel Aubry with a lap at 127.499 mph, good for eighth overall.  Aubry’s lap was two-tenths of a second faster than United Autosports’ Wayne Boyd.  WIN Autosport’s Tristan Nunez was third.

In GT Le Mans, WeatherTech Racing had themselves a ball in the opening session.  Frederic Makowiecki was fastest in the one-off No. 97 Porsche with a lap at 119.177 mph, good for 17th overall.  Makowiecki was one-sixth of a second faster than teammate Mathieu Jaminet in the No. 79.  Corvette Racing’s Antonio Garcia was third, then BMW Team RLL’s Jesse Krohn and Nick Tandy in the No. 4 Corvette.

Turner Motorsport’s championship charge got off to a good start Thursday morning as Bill Auberlen topped the charts in GT Daytona with a lap at 115.459 mph, 27th overall.  Auberlen’s lap was one-sixth of a second faster than the McLaren 720S GT3 of Inception Racing’s Frederik Schandorff.  Schandorff is last-minute addition to Inception Racing’s driver lineup in place of Ollie Millroy.  He will be making his IMSA WeatherTech SportsCar Championship debut this weekend.

Later on in the session, debris was put on the backstretch.  This triggered a second red flag, but the parts were quickly cleaned up so the session could resume.

The afternoon 75-minute session ended up being rather chaotic.  10 minutes into the session, Wright Motorsports’ Jan Heylen had contact with the Tower Motorsport by Starworks LMP2 driven by John Farano.  The contact resulted in Heylen spinning and hitting the wall hard with both ends of his Porsche 911 GT3 R.

Practice No. 2 was not very clean. There was a red flag due to @HeylenJan crashing in turn 12 after possible contact with the @starworksmotor No. 8. Here's the car back in the paddock. pic.twitter.com/grqn9q61LH

Heylen was ok after the crash, but the car was significantly damaged.  IMSA Radio reported that the chassis is done for the weekend and the team may need to send for a backup chassis from their shop in Ohio.  As for Farano, he was judged to be responsible for the crash and given a stop and 60-second hold in the pits.

Shortly after the green came back out, Andretti Autosport’s Oliver Askew had issues and stopped on-course to bring out another red flag.  A third red flag was briefly displayed later on as well.

When the dust settled, Tincknell set what turned out to be the quickest lap of the entire day right as the checkered flag was displayed.  Tincknell’s lap was four-hundredths of a second faster than Nasr.  JDC-Miller MotorSports’ Sebastien Bourdais was third fastest in his Cadillac, then Chip Ganassi Racing’s Kevin Magnussen.  Cameron was fifth.

Murry was fastest in LMP3 with a lap at 119.666 mph, 13th overall.  His lap was two-hundredths of a second faster than Fraga.  WIN Autosport’s Josh Skelton was third, then United Autosports’ Niklas Kruetten and Jakobsen.

GT Le Mans was led by Corvette Racing’s Nick Tandy, who set a quick lap at 118.849 mph late in the session that was good enough for 16th overall.  Tandy was eight-hundredths of a second faster than the WeatherTech Racing No. 97 of Kevin Estre.  Jaminet was third, then Garcia and Krohn.

Turner Motorsport was fastest again in GT Daytona, this time with Robby Foley at the wheel.  Foley’s lap at 114.884 mph (28th overall) was five-hundredths of a second faster than Vasser Sullivan’s Aaron Telitz.  Telitz’s teammate Frankie Montecalvo was third, then PFAFF Motorsports’ Laurens Vanthoor in his Porsche.  Paul Miller Racing’s Madison Snow was fifth in his Lamborghini.

Gilbert/Korthoff Motorsports’ Guy Cosmo ended up 12th in class, but he ran into his own trouble.  He went into turn 5 a little hot and went off into the gravel trap.  Frontstretch was on the scene when this occurred and captured this shot:

Later on, @GilbertKorthoff's @GuyCosmo went a little too hot into turn 5 and took this ride through the gravel. There was no visible damage to the Mercedes and Cosmo was able to continue once he got turned around. pic.twitter.com/pJtVO6tziq

The ACO’s move to delay the 24 Hours of Le Mans from June to August earlier this year resulted in a domino effect that resulted in the Motul Petit Le Mans being pushed back from Columbus Day weekend to mid-November.  As a result, more of the race will be run at night than ever before (nearly half).  As a result, the 90-minute night practice session was even more critical than normal.

Only one thing could cause most of the teams to skip as much of the session as possible.  That is rain.  Sure enough, about halfway through the session, it started pouring at Michelin Raceway Road Atlanta.  Most teams chose to pack it in early.  A few others had drivers who had not reached the minimum amount of laps in the dark.  Those drivers had to struggle through three laps in the treacherous conditions.  HTP Winward Motorsports’ Philip Ellis was in this boat.  So was Alegra Motorsports’ Daniel Morad.

Here's a couple of shots of @WinwardRacing's Philip Ellis and Alegra Motorsports' @DanielMorad having at it in the wet conditions at @RoadAtlanta. pic.twitter.com/u2qSQQ3bMy

Michelin Raceway Road Atlanta can be rather dangerous in the rain.  The last time that it rained during Petit Le Mans (2015), the race was called complete before it got fully dark, more than two hours short of completion.

Before the rains came, JDC-Miller MotorSports’ Tristan Vautier was fastest in his Cadillac DPi-V.R. with a lap at 129.160 mph.  This lap was three-hundredths of a second faster than Magnussen.  Mazda Motorsports’ Oliver Jarvis was third, then Wayne Taylor Racing’s Filipe Albuquerque and Action Express Racing’s Pipo Derani.

LMP2 was topped by Jensen with a lap at 127.729 mph, the fastest LMP2 lap of the day and sixth overall.  Jensen also had the fastest time in the first sector overall.  Jensen’s lap was nearly three-quarters of a second faster than Dalziel and more than a full second quicker than Aubry.

Performance Tech Motorsports’ Rasmus Lindh was fastest with a lap at 119.366 mph, good for 13th overall.  Lindh’s lap was one-sixth of a second faster than Braun.  Riley Motorspots’ Jeroen Bleekemolen was third, then Pigot and Fraga.

Makowiecki topped the chart in GT Le Mans with a lap at 118.364 mph.  This was a quarter of a second faster than Jaminet.  Krohn was third, then Philipp Eng in the second BMW and Corvette Racing’s Nicky Catsburg.

Finally, Hawksworth was fastest in GT Daytona with a lap at 113.813 mph.  He was just two-hundredths of a second faster than NTe Sport’s Benjamin Hites.  Magnus with Archangel’s Andy Lally was third fastest in his Acura, then Vanthoor.  GRT Grasser Racing Team’s Franck Perera was fifth.

Qualifying for the Motul Petit Le Mans is scheduled for 3:45 p.m. ET Friday afternoon.  The session will be streamed live at both IMSA.com and on NBC Sports’ TrackPass service.