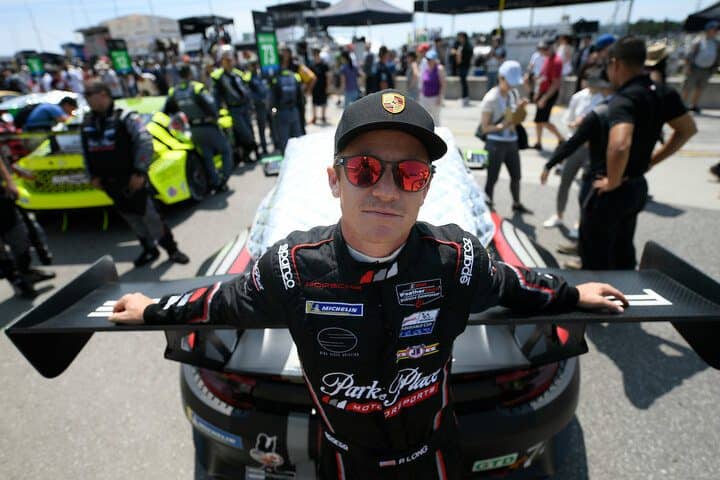 BRASELTON, Ga. – Patrick Long, the only American Porsche factory driver, announced Thursday at Michelin Raceway Road Atlanta that he will be stepping away from full-time competition at the end of the 2021 IMSA WeatherTech SportsCar Championship season.  With his racing reduced in 2022, Long will transition into a couple of new roles with Porsche itself.

“My passion for motorsports has not lessened since the first time I sat in a kart.  In fact, I would say it is greater than ever before,” Long stated in a press release.  “But, in the last several months I have recognized that the focus of that passion has gradually shifted.  I still love to race, to make a Porsche do what I want it to do and, most of all, to win.  But that passion is now more fulfilled by taking part in the bigger picture.  To support the brand that has supported me and to help usher in a future of Porsche Motorsport that holds true to where Porsche came from.  I am honored and excited by these new roles with Porsche Cars North America and Porsche Motorsport North America.  It is bittersweet, of course, to not be lining up at the Rolex 24 in 2022 after 18 consecutive starts, but I know that this is the right decision for me, and I am excited to help steer the future of Porsche in a different but equally fulfilling way.”

The other new role is that of a competition advisor for Porsche Motorsport North America.  What this means is that Long won’t be racing full-time, but he’ll still be quite active in the car.  Being a technically-minded driver, he will begin testing current (and future) Porsche equipment starting as soon as the Road Atlanta .  In addition, he will be available to factory-supported and Porsche customer teams as needed.  While he won’t be in the Rolex 24 at Daytona in January (as of now), he could still compete in a WeatherTech race in a one-off.

Long will also represent Porsche at a number of historic and vintage racing events around the world.  He plans to compete in events such as the Goodwood Revival in England and the Porsche Rennsport Reunion.

Combined between the American Le Mans Series, Grand-Am and IMSA, Long has 28 career victories.  21 of those came in the American Le Mans Series.  One was an LMP2 class win in the 2007 Petit Le Mans.  The others were in GT Porsches for Petersen White Lightning Motorsports and Flying Lizard Motorsports.   He also has eight career victories in what is now Fanatec GT World Challenge America Powered by AWS, winning the championship for Wright Motorsports in 2017.  Long is also a multiple-time class winner in the 24 Hours of Le Mans, winning the GT class in 2004 with Petersen White Lightning Racing and 2007 with IMSA Performance Matmut.

Long has also competed in stock cars briefly.  He made one career Cup start at Watkins Glen in 2012 for Inception Motorsports.  However, Long’s car suffered an engine failure entering the Esses in practice, which pitched him hard into the wall.  In a phone interview with Frontstretch back in 2012, Long explained that “the whole scope of the weekend changed for us, which was an unfortunate scenario to have happen my first weekend.”  By that, Long meant that Inception Motorsports didn’t have a backup car, so they had to borrow one from Humphrey-Smith Racing.  The team re-numbered that car from No. 91 to No. 30, then start-and-parked it.

Outside of the Cup Series, Long has one start in the now-Xfinity Series, coming in 2010 at Road America.  Driving for MSRP Motorsports in a very rare non-start-and-park for the organization, Long qualified seventh and finished 14th.  Long also won his only career ARCA start at New Jersey Motorsports Park in 2009 and won two races in the then-K&N Pro Series West.