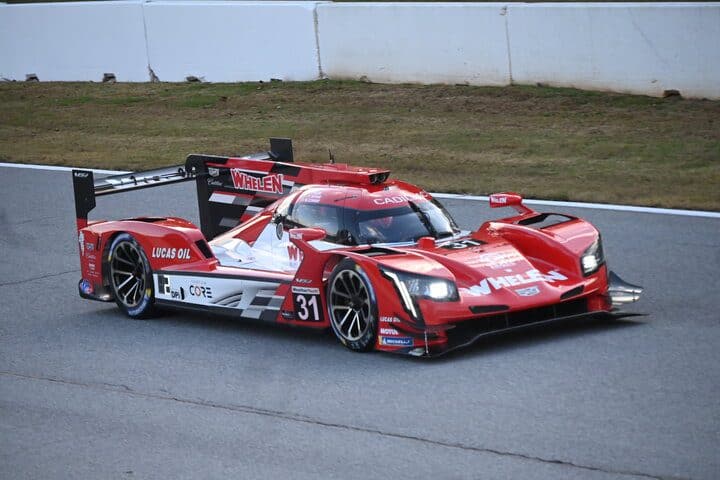 “It took me a while [for the pole] to sink in just because there is so much on the line and you just want to deliver,” Nasr said after the session. “It was all about getting the tires correctly in the window and bring them up and just nailing those laps. It was pretty close. I have to say, I need to catch a breath. I don’t think I have anything else left on the car. And I’m so proud for the team. This is a huge effort for us.”

Nasr’s lap was less than two-hundredths of a second faster than Mazda Motorsports’ Harry Tincknell, who was fastest in practice on Thursday. JDC-Miller MotorSports’ Sebastien Bourdais will start third in his Cadillac DPi-V.R., followed by Chip Ganassi Racing’s Kevin Magnussen. Meyer Shank Racing with Curb-Agajanian’s Dane Cameron will start fifth.

The 35 points that Nasr and Pipo Derani earned for the pole closed their margin to Wayne Taylor Racing’s Filipe Albuquerque and Ricky Taylor to a mere eight points. This is an effective dead heat since the minimum difference between each position is 10 points. Whichever team finishes ahead of the other Saturday night will win the 2021 IMSA WeatherTech SportsCar Championship in the DPi class.

In LMP2, PR1 Mathaisen Motorsports’ Ben Keating won the pole with a lap at 126.597 mph, set right at the end of the session. Keating’s pole run came despite a spin that put him out in the grass and Georgia red clay. Thanks to the clay, he did not flat-spot his tires.  Keating’s lap was one-third of a second faster than WIN Autosport’s Steven Thomas.  Era Motorsport’s Dwight Merriman will start third.

LMP3 honors went to United Autosports’ Niklas Kruetten. Kruetten won the pole with a lap at 120.850 mph. The lap was eight-hundredths of a second faster than Performance Tech Motorsports’ Rasmus Lindh. This came despite an off-course excursion after Lindh went over a curb incorrectly and popped a wheelie.

For most of the weekend prior to qualifying, WeatherTech Racing’s Porsches seemed to be the class of the field in GT Le Mans. At first, this remained so as Matt Campbell put the No. 79 Porsche on top.  However, BMW Team RLL’s Jesse Krohn turned in a lap at 121.554 mph to win the pole in the final race for the BMW M8 GTE.

Krohn’s lap was a half-second faster than Campbell. Corvette Racing’s Antonio Garcia will start third, then Frederic Makowiecki in the No. 97 Porsche. Nick Tandy starts fifth in the second Corvette.

In GT Daytona, qualifying was split for the final time between points and position. During the points portion of the session, Vasser Sullivan’s Jack Hawksworth was fastest with a lap at 115.977 mph to earn the 35 points. Hawksworth was nine-hundredths of a second faster than the Lamborghini of Paul Miller Racing’s Bryan Sellers.  Turner Motorsport’s Bill Auberlen was third quickest, then Zach Veach in the second Vasser Sullivan Lexus. GRT Grasser Racing Team’s Franck Perera was fifth.

During the GT Daytona position portion of qualifying, things simply could not be any closer. A number of teams swapped the top spot back and forth early on before Paul Miller Racing’s Madison Snow took the advantage. With the rest of the pack so close behind, Snow knew that he needed to set a better lap.

On his eighth lap of qualifying, Snow turned in a lap at 115.350 mph, an improvement of just 14-thousandths of a second over his previous best time. This lap held up to earn Snow the GT Daytona pole.

It turns out that Snow needed every one of those thousandths of a second. The lap ended up winning the pole by one-thousandth of a second over NTe Sport’s Benjamin Hites. Turner Motorsport’s Robby Foley will start third, just two-hundredths of a second behind Snow. Vasser Sullivan teammates Aaron Telitz and Frankie Montecalvo will start fourth and fifth. The top five cars were separated by less than two-tenths of a second and 12 of the 15 cars qualified within one second of pole.

The Motul Petit Le Mans is scheduled to go green at 12:10 p.m. ET Saturday afternoon. Coverage of the race will start at Noon ET with three hours of coverage on NBC. The remainder of the race will be live on NBCSN.