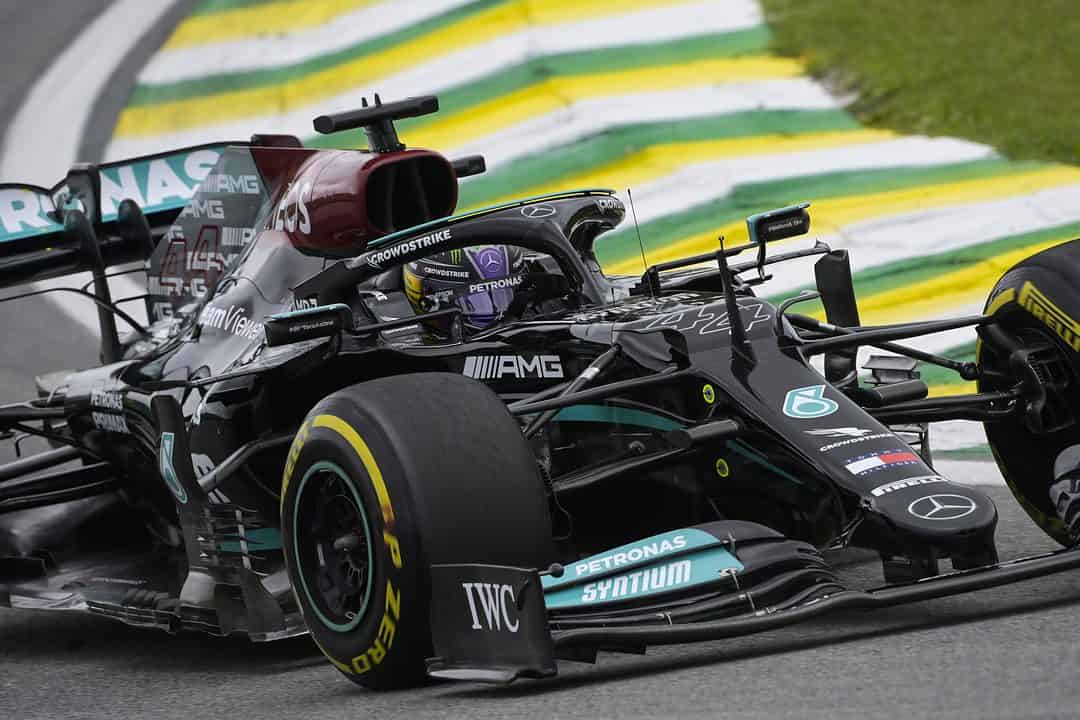 Lewis Hamilton nabbed the pole position for Saturday’s (Nov. 13) sprint race, which will set the grid for the 2021 Sao Paulo Grand Prix on Sunday (Nov. 14).

Despite this, Hamilton attained a five-place grid penalty for taking a new internal combustion engine, meaning on Sunday he will start five places back from wherever he finishes in Saturday’s sprint race.

Nevertheless, Hamilton dominated Q3, beating Verstappen to pole by nearly half a second. Red Bull was clearly on the back foot; Christian Horner even told the commentary team that he would be relieved to place one car on the front row.

Verstappen, despite the pace difference, seemed less than panicked over the pace deficit to Mercedes. “When they take a new engine, naturally they have a bit more power for the weekend,” the championship leader said. “So for me it’s not a big shock.”

In terms of the race, Verstappen and Red Bull remain confident in their car and their chances to further out perform Mercedes.

“We’ll be completely different, it’s going to be a lot warmer,” Hamilton said.

“It’s been so hard coming from the last race. We’ve got the penalty tomorrow but we’ll give it everything we’ve got. Max is obviously starting on pole now, it’s going to be very hard, obviously, to catch him.”

Despite having his first flying lap of Q2 deleted due to a track limits violation, Hamilton displayed a monstrous pace on his second outing. Initially the gap to Verstappen was a concerning, but not dire, 0.181 seconds.

By the session’s end, however, Hamilton had stretched his pace over Verstappen to more than four tenths. To make matters worse for Red Bull, Bottas outpaced Verstappen as well, albeit 0.358 seconds behind Hamilton as well.

Just in case the situation wasn’t rough enough, Perez ended Q2 a whopping nine tenths behind Hamilton. This is nowhere near where Red Bull needs him if he’s to play any role in the result of the driver’s or constructor’s title race.

The pace in Q1 was erratic, to say the least. Verstappen held the top spot for a good chunk of the session’s first half, owing largely to the fact that neither Mercedes set a time until 10 minutes remained in the session.

The McLarens of Lando Norris and Daniel Ricciardo joined the Red Bulls a few tenths up on the field to start off Q1, but it was short lived as the track came to life.

Once the Silver Arrows hit the track, Hamilton showed his hand, putting himself five tenths up on Verstappen with his first flying lap. And he went even faster on his next few laps around Interlagos.

Most notable from Q1, Nicholas Latifi’s last minute lap to bump George Russell down the order means that Russell has been out-qualified by his Canadian teammate in a conventional quali for the first time. While that doesn’t make Latifi’s grid position of 17th any more useful, it is certainly a fun statistic to note as the season winds down.

Additionally, the Alpha Tauris of Pierre Gasly and Yuki Tsunoda put in great laps, with Tsunoda only three one-thousandths behind Gasly. The rookie can take solace in having brought the gap to his teammate down to such a small margin.

The starting grid for Saturday’s sprint race is: