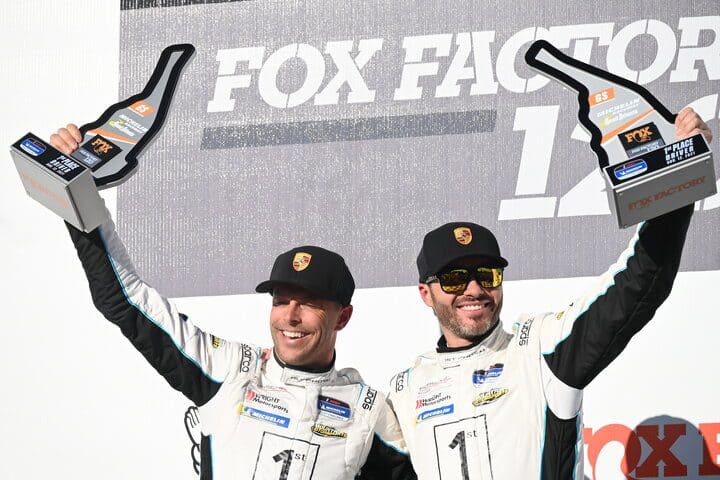 BRASELTON, Ga. – Wright Motorsports’ Jan Heylen took the lead Friday afternoon (Nov. 12) with 21 minutes to go when Murillo Racing’s Eric Foss and Turner Motorsport’s Bill Auberlen collided in the chicane while racing for the lead.  From there, Heylen held off a charging Scott Andrews to win the FOX Factory 120 at Michelin Raceway Road Atlanta.

“It’s been an unbelievable year,” Heylen told NBC Sports’ Dillon Welch in victory lane.  “Yes, we didn’t have to win, but I’m sure that everybody [with Wright Motorsports] wanted that last one.  Lots of pressure from [Scott Andrews] behind with a fast car.  I think I used up a little too much of my tires early in the stint, but we got it done and I couldn’t be happier.”

Originally, KohR Motorsports’ Kyle Marcelli qualified his Ford Mustang GT4 on the pole on Thursday.  However, the team did not come to Georgia with winning anything on their minds.

Despite winning the pole for the race, KohR Motorsports stuck to their guns and chose to withdraw from the event.  Frontstretch asked IMSA representatives Thursday night what the protocol for this type of situation would be.  Communications representatives were not 100% certain at the time, but the answer we received is ultimately what happened.  Instead of everyone in one column moving forward like in NASCAR, the entire field was move up one position.

As a result, Murillo Racing’s Kenny Murillo ended up with the overall pole.  Prior to the race, Murillo told Frontstretch that being moved from second to the pole for the start meant that he had to adjust his plan for the race.  Having the lead meant that he needed to be much more aggressive in order to stay up there.

That is what happened.  When the green flew, Murillo drove as hard as he could to pull out a lead over CarBahn Motorsports with Peregrine Racing’s Nolan Siegel.  That lead was only a second and change, but enough for Murillo.  Behind him, Notlad Racing with RS1’s Patrick Gallagher moved himself up to second despite a car that was not up to his standards.

KMW Motorsports with TMR Engineering’s Roy Block described a lot of the on-track action on Wednesday and Thursday after the race as “chippy.”  That’s a fairly good representation of the proceedings as much of the first half of the race was spent under yellow.  First, Rebel Rock Racing’s Frank DePew spun into the gravel trap in turn 5 after contact from Bryan Herta Autosport’s Ryan Norman.  DePew was able to continue after getting pulled out of the gravel.  The trouble stayed with DePew as right after the restart, he got in the back of JDC-Miller MotorSports’ Chris Miller and spun Miller into the gravel at turn 6.

The scariest incident of the race occurred a lap or so after the restart from the Miller spin.  Archangel Motorsports’ Alan Brynjolfsson attempted to make a move for position on Turner Motorsport’s Vin Barletta entering turn 12 and lost the nose on his Aston Martin.  That pitched Brynjolfsson into Barletta.  Barletta then spun and went head-on into the tires just before the start-finish line.

From our vantage point in the Media Center, Bartletta is out of the @turnermotrsport car. As you can tell, there’s going to be a lot of cleanup required. pic.twitter.com/jlvmghiA1p

As you can see above, Barletta was able to exit his BMW and stand on his own two feet without assistance.  However, the No. 96 BMW M4 GT4 was thrashed.  Barletta and Robby Foley entered the race third in points with a decent chance at the title.  Those chances were gone.

The caution resulted in numerous pit stops as it took roughly 25 minutes to clean up the scene of the crash.  When the race resumed, Auberlen was in the lead, but quickly lost it to Foss.  Heylen restarted in seventh and slowly made his way up the order.

After another caution due to issues for VGMC Racing’s Karl Wittmer, Auberlen immediately put the pressure on Foss for the lead.  He made a move to the outside entering the chicane right after the restart, but Foss was able to hold him off.  Foss briefly opened up a gap, but Auberlen was able to close back down.

By this point, Heylen had moved himself back up to third and was likely to threaten for the lead.  Given a 30-point gap in the points entering the race and the fact that Hardwick outqualified Dillon Machavern, Heylen winning would have gotten him the championship regardless of what Auberlen did.

Four laps later, Auberlen made another move on the right side to snag the lead at the chicane.  He was almost all the way past Foss under braking, but Foss eased his braking to get back alongside.  There was some contact at the apex of the chicane entry.  Then, Foss appeared to turn into Auberlen in the righthander in the chicane.  That resulted in the cars locking together and sliding off into the gravel.  Foss was able to power himself out of the gravel and continue, but Auberlen was stuck in the trap with a wounded BMW.

Controversy! @Billauberlen and @ericfossracing have collided going for the lead in the chicane! Auberlen is stuck in the trap and @HeylenJan is in the lead with the championship in his hands. pic.twitter.com/NMwwf9L94y

Heylen was able to sweep past the wrecking duo to take the overall lead.  Foss ended up with broken rear suspension parts and had to crab his Mercedes back to the pits.  The Murillo Racing team would make repairs that allowed Foss to finish 30th overall (17th in Grand Sport), seven laps down.  Auberlen was done for the day and there were tempers afterwards.

Turner Motorsport owner Will Turner actually went to the Murillo Racing pit to vocally give them the business.  There were no punches thrown, pushing or shoving.  However, there were likely expletives.

Heylen looked home free in the lead, but the man on the move in the closing laps was Andrews in Riley Motorsports’ No. 21 Toyota GR Supra GT4.  Despite being down on top speed to the Porsche, Andrews was able to quickly move up the order from sixth on the restart to second.  Having the better part of a half-second in pace in hand over Heylen, Andrews ran down the Porsche in the closing laps.  However, Heylen used his superior top-end speed to hold off Andrews’ Supra to take the victory.

The margin of victory for Heylen and Hardwick was a mere 0.162 of a second over Andrews and Anton Dias Perera.  TeamTGM’s Hugh and Matt Plumb crossed the line in third in their Chevrolet, but they failed to meet the minimum weight requirement of 1470 kilograms (~3240.8 pounds) in post-race inspection.  As a result, they have been moved to the rear of the Grand Sport class.

The penalty boosted the McLaren of Andrew Wojteczko Autosport’s Orey Fidani and Kuno Wittmer up to a third-place finish.  McCann Racing’s Andrew Davis and Michael McCann Jr. were fourth, while Brynjolfsson and Trent Hindman recovered from an avoidable contact penalty for causing the Barletta wreck to finish fifth.

CB Motorsports’ Trenton Estep and Mark Kvamme were sixth, then Gallagher and Stevan McAleer in seventh after being penalized for a equipment violation.  Forbush Performance’s Tom Long and Luke Rumburg were eighth in the team’s series debut, while Brent Mosing and Tim Probert brought the second Murillo Racing Mercedes home ninth.  Goldcrest Motorsports’ Wesley Slimp and Tyler Hoffman were 10th in their Porsche.

In TCR, Norman started from the pole and led until he had the aforementioned contact with DePew that put DePew’s Camaro into the gravel.  A round of stops saw most of the class pit for a splash of fuel.  Roadshagger Racing’s Gavin Ernstone stayed out and assumed the advantage until the Barletta crash, which happened right as the 40-minute minimum drive-time was satisfied.

Once the rounds of pit stops cleared up, Copeland Motorsports’ Tyler Maxson ended up with the lead with Michael Lewis in a similar Hyundai giving chase.  A couple of laps after the restart, Lewis was able to get him for the lead.

After the fourth caution, KMW Motorsports with TMR Engineering’s Tim Lewis Jr. was able to run Michael Lewis and make the pass with 30 minutes to go to take the class lead.  Tim Lewis Jr.’s Alfa Romeo Giuletta TCR is the best car in the TCR class in a straight line.  That allowed him to make good use of the straightaways to pull away from the Hyundais.

Tim Lewis Jr. was able to hold to take his and Block’s second win of the year.  However, the real race was for second.  Michael Lewis attempted a somewhat similar move on Maxson for second in the chicane on the final lap.  Michael all but had the spot, but Maxson got into his left rear corner.  That put the No. 77 Hyundai off into the dirt and cost him all of his momentum.  Atlanta Speedwerks’ Ryan Eversley saw this happening and made a move up the inside going under the FOX Factory bridge that allowed him to go from fourth to second at the line.

Block and Tim Lewis Jr.’s margin of victory over Eversley and Tyler Stone was 3.128 seconds.  After the race, Eversley admitted to Frontstretch that the contact between Michael Lewis and Maxson caused him to literally bust out laughing to the point that he lost some of his voice.  That means that he literally laughed his way to a second-place finish.