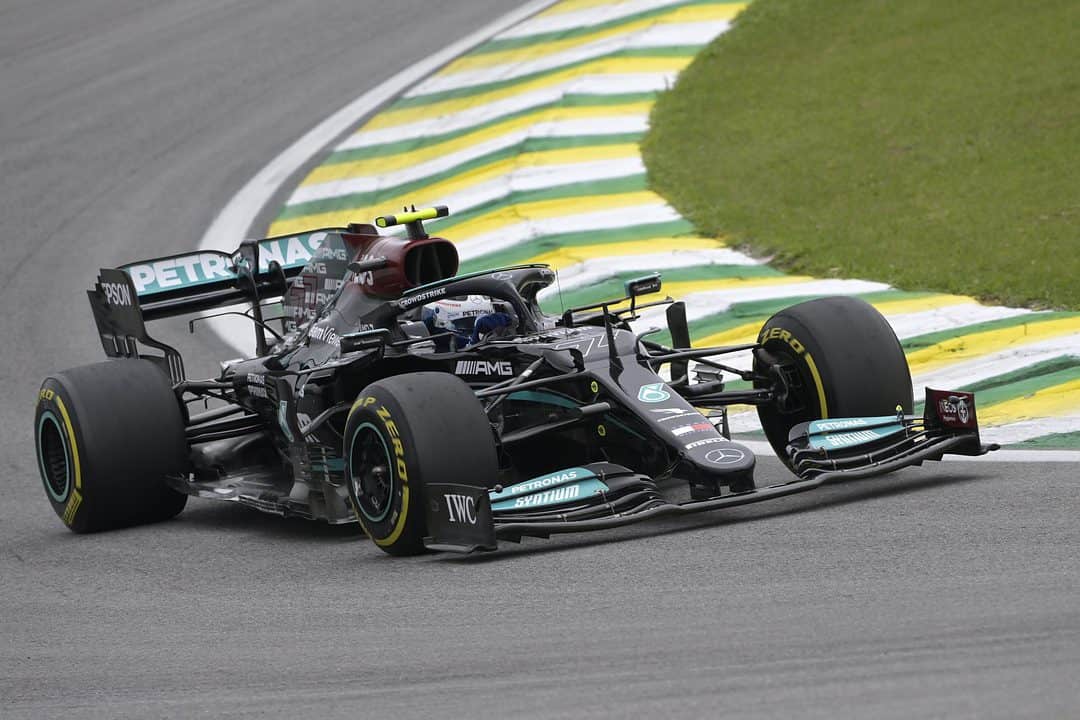 At the Brazilian Grand Prix, Formula 1 ran its final experimental sprint race of the 2021 season, with a 30-minute, 24-lap race deciding the grid order for tomorrow’s (Nov. 14) full-length 71-lap Grand Prix. Mercedes driver Valtteri Bottas won the sprint race, coming home ahead of Red Bull’s Max Verstappen. His championship rival Lewis Hamilton scythed his way to fifth in his Mercedes, although he will take a five place grid penalty for tomorrow’s race as a result of an engine change.

Hamilton had qualified first on Friday but was retroactively disqualified from qualifying this morning after the FIA found that the DRS opening on his rear wing was too wide. The penalty dropped Hamilton to last place on the grid for the sprint race, while Verstappen was promoted to first. Verstappen was also penalized after he was seen touching the rear wing of Hamilton’s Mercedes following qualifying, but he escaped with €50,000 fine.

The start was fairly hectic. Bottas — who had originally qualified third, over fourth tenths of second behind his teammate Hamilton — had a solid getaway, pulling alongside Verstappen and sweeping into the lead as they entered the first corner. Meanwhile, Hamilton made up four spots in the initial start, and moved up two more places as the cars sped down the main straight to start the second lap.

The Ferrari duo had had yet another strong qualifying, with Carlos Sainz placing sixth and Charles Leclerc placing seventh as the Italian team looks to beat out McLaren for third in the constructors championship. Sainz had a fantastic start, taking advantage of a slow start from Pierre Gasly and going down the inside of Sergio Perez into turn 1. Perez had qualified fourth, only a tenth behind Verstappen as the Mexican driver appears to have found his footing at Red Bull as the season draws to a close, but was bogged down when the lights went out. Soon Sainz was past Verstappen as well, with the Dutchman leaving the track and giving the Ferrari driver second place, although he would reclaim the start a couple of laps later. Sainz managed to fend off Perez for the entirety of the sprint to take an impressive third place.

There was a coming together for the two Alfa Romeo drivers on the second lap, with Antonio Giovinazzi going down the inside of Kimi Raikkonen into turn one. There was slight contact and Raikkonen was sent spinning off the track, dropping down to last place. Both Alfa Romeos had made it into Q2 on Friday, with Raikkonen 14th and Giovinazzi 15th. Giovinazzi finished the sprint in 13th but Raikkonen could only recover to 18th.

By lap 8, Hamilton was up to 11th place, passing Yuki Tsunoda, Giovinazzi and Fernando Alonso. After closely following Daniel Ricciardo for several laps, he finally shot around the outside of him at the start of lap 13 with the help of DRS and a slipstream. Hamilton then sliced his way past Sebastian Vettel for ninth and was soon up to eighth, passing Esteban Ocon. One lap later Hamilton blasted past Gasly for seventh place and on lap 20 he made his way past Leclerc for sixth. As the final lap started, Hamilton dove down the inside of Norris for fifth place, a phenomenal result after starting last.

Norris finished in sixth, but will be promoted back up to fifth after Hamilton takes his penalty. Both McLarens had managed to sneak into Q3 despite looking off the pace in Friday practice, with Norris qualifying eighth and Ricciardo slotting into ninth. While Norris made good progress, Ricciardo fell back to 11th by the end of the sprint.

Gasly looked especially rapid once again in qualifying, just three tenths behind the Mercedes of Bottas, but his poor start meant that he only finished eighth in the sprint. His teammate Tsunoda had qualified 13th, unable to match the speedy Gasly, and fell to 15th.

While Alonso made it into Q3 and qualified 10th, he came home in 12th after the sprint. His teammate Ocon was less than a tenth-of-a-second behind in Q2 and earned 11th spot in qualifying. Ocon improved to ninth in the sprint. Vettel out-qualified his teammate Lance Stroll once again, with the German qualifying 12th while Stroll was down in 16th, unable to make it out of Q1. Vettel reached 10th spot in the sprint, while Stroll moved up to 14th.

The Williams struggled in qualifying, both failing to make it out of Q1. Nicholas Latifi beat his teammate George Russell for the first time in a traditional qualifying session, ending up 17th with Russell right behind. The duo finished the sprint in 16th and 17th. The Haas cars were at the back of the field as usual, with Mick Schumacher edging out Nikita Mazepin by about two tenths-of-a-second. Schumacher finished the sprint 19th, several seconds ahead of Mazepin.

The Brazilian Grand Prix starts at 12:00 p.m. ET on Sunday Nov. 14 on ESPN. Bottas starts from pole with Verstappen in second, and Hamilton in 10th.