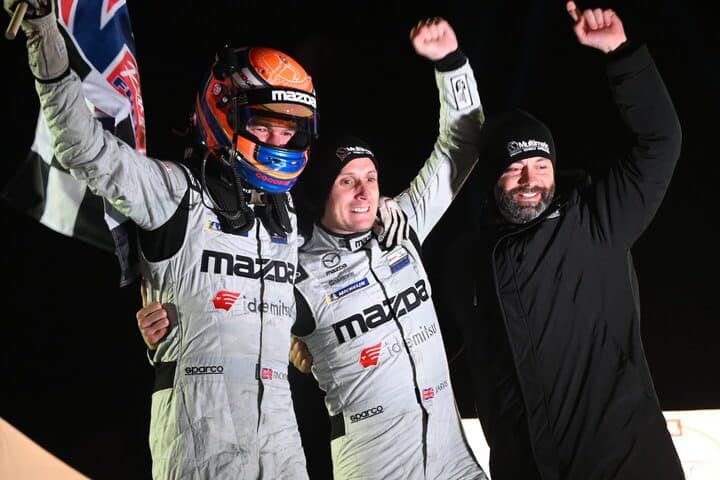 BRASELTON, Ga. – Mazda Motorsports’ Harry Tincknell recovered from a spark plug issue.  From there, the team used cautions to gain back three laps and ran down Action Express Racing’s Felipe Nasr late.  Tincknell passed Nasr entering turn 7 with 22 minutes to go to take the lead.  From there, Tincknell was able to deftly handle the lapped traffic to give himself, Jonathan Bomarito, Oliver Jarvis and Mazda Motorsports a farewell victory in the Motul Petit Le Mans at Michelin Raceway Road Atlanta Saturday night (Nov. 13).

“Honestly it’s a Hollywood script come true,” Tincknell told NBC Sports’ Dillon Welch after the race.  “This is pure hard work by everyone Mazda, Multimatic, AER.  I never gave up with two stints to go.  I had a five-second gap to close down and it’d come in traffic.  It’ll sound super cheesy, but if there’s a place to pass it’d be [turns 6 and 7] with a divebomb.  We have such a fantastic team.  Sebring, [two] Watkins Glen [wins] and now a Petit Le Mans.”

Nasr got held up by the Wright Motorsports Porsche of Jan Heylen in turn 7.  That allowed Ricky Taylor to get a big run down the backstretch.  When he got to the chicane, Ricky dove to the inside.  Nasr went to block and effectively shoved the Wayne Taylor Racing Acura off the road.

LAST-LAP DRAMA FOR THE @IMSA CHAMPIONSHIP!

After crossing the trap, Ricky was actually in front of Nasr, but had little traction.  That allowed Nasr to get back past to finish second and win the DPi championship.

“I don’t know.  I just did what was right,” Nasr said afterwards.  “I saw [that Ricky Taylor was] coming.  Bad timing with traffic; nothing to do but defend myself.  When I saw [Ricky] going that deep I was like, he ain’t gonna make it!  There are so
many things in my mind.  So many emotions.  My final race with the team and we win this championship.  So much effort we’ve put together.  I can’t believe we pulled this off.  I am so happy for these guys, and a huge team that I’ve been part of.  Thank you very much Action Express Racing and Whelen Engineering.”

Action Express Racing’s Felipe Nasr led the 43-car field to green just after Noon on a somewhat windy and crisp November day.  Little did he know that the first half of the race was going to be strewn with incidents.

The first of these incidents came less than 30 minutes into the race when Era Motorsport’s Dwight Merriman went off-course exiting turn 12 after contact with Albuquerque and hit the tire barrier with the left side of his ORECA 07-Gibson.  The impact sheared the left front wheel off of the car and left it disabled to bring out the first caution.  Merriman was able to walk away from the crash, but the team was out on the spot.  Additional incidents involved Jim Cox, Benjamin Hites, Niklas Kruetten and Rodrigo Pflucker.

The scariest incident on the day actually came on a restart just past the four-hour mark.  Once the green flag is displayed, you can punch the accelerator in IMSA, no matter where you are.  Unfortunately, there was a big stackup at the bottom of the hill right before the chicane.  The result was an almighty pile-up that involved eight cars.

Big wreck on the restart at Road Atlanta. #IMSA #MotulPetitLeMans

At least six cars involved in this stack-up.

Jordan Taylor piled into the back of the Inception Racing McLaren 720S GT3 driven by Brendan Iribe.  Turner Motorsport’s Bill Auberlen ended up in the wall on the left side of the track while HTP Winward Motorsport’s Russell Ward was also involved there.  A mess on the right side caught up Vasser Sullivan’s Kyle Kirkwood, Gilbert/Korthoff Motorsports’ Stevan McAleer, GRT Grasser Racing Team’s Michele Beretta and NTe Sport’s.  All the drivers involved were able to walk away from the crash, but Jordan Taylor did mention afterwards that he was suffering from lower back muscle spasms.

Of these eight cars, only the NTe Sport Audi actually returned.  The other seven teams were out on the spot.  The cleanup necessary due to the crash kept the race under yellow for nearly a half-hour.

Despite the carnage at times, the DPi class was pretty clean in the first half of the race.  Then, Chip Ganassi Racing’s Earl Bamber was hit from behind by JDC-Miller MotorSports’ Loic Duval. This broke off the right rear wing endplate and put debris on track to cause a caution.  The pit stop to replace the piece was disorganized and slow, ultimately costing the team a lap that they were never able to get back.

Meyer Shank Racing with Curb-Agajanian’s No. 60 was right up in the hunt, despite Juan Pablo Montoya getting spun out of the lead in the chicane at one point.  Unfortunately, their chances of winning ended when Helio Castroneves lost the steering in the car after hitting something.  A stint in the garage dropped the team to a sixth-place finish.

Tire choices played a big role in the end of the race.  Action Express Racing chose to go with fresh rear tires only on the final stop, while Wayne Taylor Racing went with four scrubbed tires.  Mazda Motorsports went with four fresh tires.  As the run went on, Nasr’s multiple-stint old rear tires went off, allowing Tincknell to reel him in from seven seconds back.  Lapped traffic helped Tincknell get to Nasr, but the move for the lead was pure machismo.

The margin of victory for Mazda Motorsports was 3.297 seconds over Nasr, Derani and Mike Conway.  The Wayne Taylor Racing Acura of Ricky Taylor, Albuquerque and Alexander Rossi was third, while Action Express Racing’s second car for Jimmie Johnson, Kamui Kobayashi and Simon Pagenaud was fourth.  Chip Ganassi Racing’s Bamber, Scott Dixon and Renger van der Zande were never able to recover from the aforementioned contact and ended up a lap down in fifth.

In LMP2, PR1 Mathaisen Motorsports seemed to have the race in the bag with 30 minutes to go.  Mikkel Jensen had a 10-second lead at that point and just had to manage the gap.  However, Tower Motorsport by Starworks’ Gabriel Aubry was on a charge.  Over that final half-hour, he gained on Jensen on every since lap.

On the final lap, Aubry was able to get to the rear of Jensen, then contact was made in the chicane again.  Jensen was able to hold on to take the win at the line by 1.609 seconds.  However, a drive-through penalty was assessed to the No. 52 after the checkered flag due to avoidable contact.  As a result, the victory went to Aubry, John Farano and James French.

With the penalty, the official margin of victory was 35.391 seconds over PR1 Mathaisen Motorsports’ Jensen, Ben Keating and Scott Huffaker.  WIN Autosport’s Thomas Merrill, Tristan Nunez and Steven Thomas were a lap down in third.  Keating and Jensen clinched the LMP2 championship by starting the race.

In LMP3, a season-high 10 cars started Saturday’s race.  However, attrition hit the class hard.  Only six cars finished and four were running competitively at the end.

The vast majority of the race was a duel between Riley Motorsports’ No. 74 shared by Gar Robinson, Felipe Fraga and Scott Andrews, and JrIII’s No. 30 with Ari Balogh, Garret Grist and Spencer Pigot.  The two ran nose-to-tail for hours.  However, Riley Motorsports pulled away in the final hour to take the win

Andrews, Fraga and Robinson’s margin of victory was a full lap due to the position of the leaders over JrIII Racing’s Balogh, Grist and Pigot.  Riley Motorsports’ No. 91 for Jim Cox, Dylan Murry and Jeroen Bleekemolen ended up four laps down in third, while FASTMD Racing’s Todd Archer, Max Hanratty and James Vance ended up 10 laps down in fourth in their first LMP3 race.  Robinson earned solo LMP3 championship honors with his win.

In GT Le Mans, Jordan Taylor and Antonio Garcia clinched the class championship just by starting the race.  They still wanted the spoils, though.  Unfortunately, the aforementioned stack-up ended their day in the fifth hour.

Much of the second half of the race saw the remaining Corvette do battle with both of the WeatherTech Racing Porsches.  Contact at one point actually put the No. 97 Porsche of Kevin Estre into the gravel exiting the chicane, which cost Estre second.

Later on in the race, problems hit the No. 4 and multiple pit stops put them out of the hunt.  That left the WeatherTech Racing teammates to settle things themselves.

Estre ended up with a pretty decent lead in the final hour, but teammate Mathieu Jaminet was faster and quickly ran him down.

With three laps to go, Jaminet was able to get past Estre for the class lead.  From there, he held on to take the victory for himself, Cooper MacNeil and Matt Campbell.

WeatherTech Racing effectively staged a form finish.  The margin of victory was 0.318 seconds over Estre, Frederic Makowiecki and Michael Christensen.  BMW Team RLL’s John Edwards, Augusto Farfus and Jesse Krohn were a lap down in third.  Only three of the six GTLM teams finished.

In GT Daytona, Paul Miller Racing’s Madison Snow led early from the pole and had a very good Lamborghini.  Then, Snow had contact with Forty7 Motorsports’ Mark Kvamme exiting the chicane.  Kvamme spun and caught Snow in the right rear corner on the way around.

The contact resulted in a substantial tire rub and a forced stop for Snow.  When Snow came in, the Paul Miller Racing crew could not get the right rear wheel off.  This resulted in a stop that put the team nine laps down.  Snow and Bryan Sellers were 50 points behind PFAFF Motorsports’ Zacharie Robichon and Laurens Vanthoor entering the race and this issue killed their championship chances.

Wright Motorsports had problems from the start.  Trent Hindman cut his left rear tire on the first lap right after passing pit-in.  As a result, he had to drive the entire track on the flat to get it changed.  Hindman kept the car from getting damaged, but he ended up two laps down almost immediately.  With the early cautions, the team was able to make that time up.

The stackup crash early in the fifth hour decimated the class.  The crash resulted in six different teams dropping out.

The class of the field in the second half of the race were PFAFF Motorsports and The Heart of Racing.  The two teams fought each other hard but pit strategy won out.  When Vanthoor made his final stop with 39 minutes to go, Ross Gunn swept into the lead in his Aston Martin.  From there, Gunn could not be caught as he drove to victory with teammates Ian James and Roman deAngelis.

Paul Miller Racing’s Snow, Sellers and Corey Lewis recovered from their wheel issue to finish seventh, 13 laps down.  That allowed Robichon and Vanthoor to win the GT Daytona championship.

The race will likely be remembered for attrition.  More than a third of the field (15 of 43 starters) failed to finish.  Eight of the DNFs were due to crashes.

Phil, Benja Hites was not involved in any accident of the Audi 41. Car lost 9 laps due to a accident of Conwright exiting pits in his first stint, and the Yount was involved in the pile up of the restart.

Is it possible to remove the name of Benja Hites as one of the driver that were involved in incidents as its not accurate, nor real.