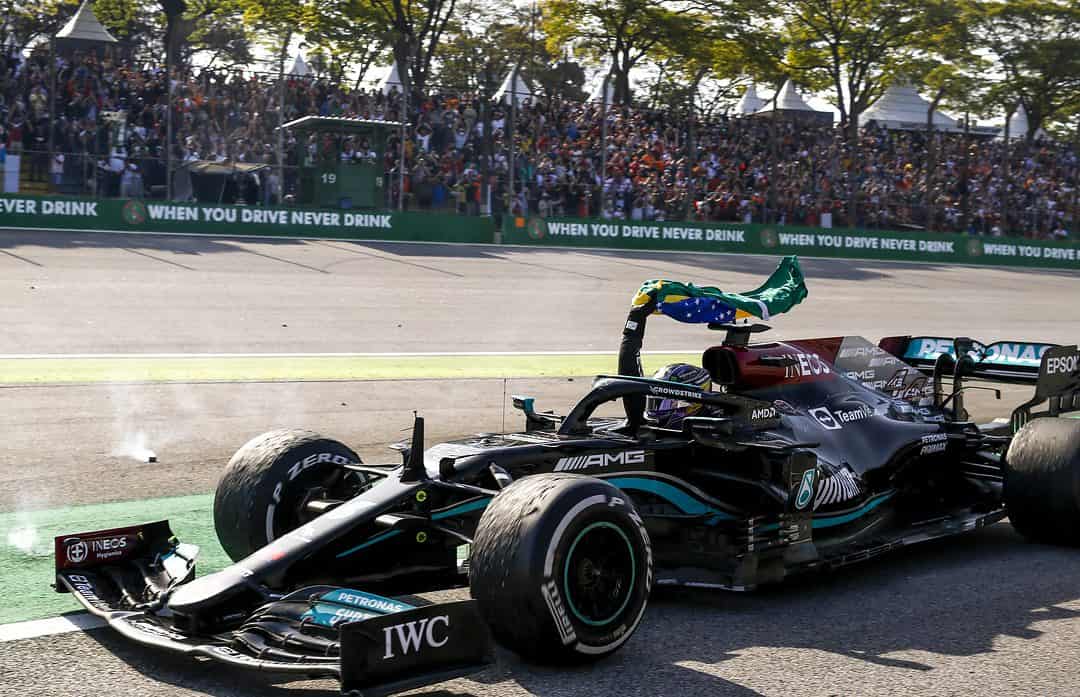 Lewis Hamilton scored his 101st Formula 1 win on Sunday in Brazil.  His stellar performance, starting from tenth and claiming the win, further fanned the fires for the driverʻs championship and closed the gap to Max Verstappen (332.5 – 318.5).

The Sao Paulo Grand Prix featured a wonderful battle between the top two drivers, though there is an argument as to how clean it may have been.  For fans of Mercedes, Verstappen appeared to be overly aggressive in pushing Hamilton wide on lap 48 as the latter tried to make a pass.  If you are a fan of Red Bull, Verstappen seemed to drive hard and push wide because he had pushed his car to the limit.

The stewards agreed with the Red Bull/Verstappen view and no penalty ever landed on Verstappenʻs performance.  For Mercedes, the conclusion summed up a weekend of indignities that began with Hamilton suffering a penalty owing to question about his rear wing to questions about the teamʻs failure to watch Hamilton drive his way through the field.

For the rest of the grid, there was still plenty of intrigue but played out in a rather tame fashion.  With Mercedes and Red Bull holding down the top four spots, Ferrari moving into the next two, Pierre Gasly a frequent top ten runner, and Alpine holding their own, the top ten was pretty much covered.

In fact, much of the drama surrounding Ferrari has died down in recent weeks and the team has not put together two solid weekends in a row with two fifths and two sixths and becoming solidly the third-best team on the grid.

If anyone is playing the part of wildcard at this point, it is Yuki Tsunoda, who has been showing blazing speed, but struggles to put things together, this time qualifying his Alpha Tauri in 15th.  At the start of the race, Tsunoda banged into Lance Stroll and effectively took them both out of potential points-paying positions, with Stroll eventually retiring and Tsunoda finishing where he started after getting a replacement wing and driving his way from the back.

Verstappen did to Valtteri Bottas what the Finn had done to him the previous day in the sprint qualifying race, pipping him to take over the top spot.  Bottas managed to hold on to second and then began what was a race-long quest to fend off Sergio Perez.

Hamilton started in tenth and by the end of the first lap had slid into the seventh spot.  For Hamilton, the race was nothing more than a hunt.  Something about his mindset, car, and comfort at Autódromo José Carlos Pace, led to a masterful performance.  From the start, there was reason to believe that Hamilton would not be denied the victory.

Though Verstappen did his best to curtail Hamiltonʻs efforts just past the midpoint of the race, Hamilton still cruised home with the win and a ten-second advantage.  Verstappen never quite felt heat from Bottas and took second, with Bottas crossing in third.

Sergio Perez claimed the fastest lap and finished fourth, helping Red Bull maintain a close margin to Mercedes in the constructorʻs title (521.5 – 510.5).  The Ferraris of Charles Leclerc and Sergio Perez earned the fifth and sixth spots in what was a rather quiet race for the team.

Pierre Gasly did what he has done much of the year and placed his Alpha Tauri seventh with Esteban Ocon nipping at him in eighth.  Fernando Alonso followed his Alpine teammate across the line in ninth and Lando Norris put together a strong performance to claim tenth, even though he started tenth.

– The action between Hamilton and Verstappen comes as no surprise and is exactly what should be expected from the title contenders.  If anyone thought that Verstappen was going to relinquish the top spot with a gracious ʻhere ya go, old chumʻ is out their mind – especially as he has shown that he is willing to take them both out rather than see Hamilton be in front.

Still, this cat-and-mouse game played out rather tame than what might have happened.

That moment when we all held our breath on Sunday ?

Hamilton eventually made it impossible for Verstappen to keep him behind and blasted his way past the Red Bull driver in the same spot where they had nearly collided a few laps earlier. The best result is that both drivers came out of the exchange unscathed but exchanges like these can be ripe for lunacy and for a week, such bad decision-making failed to make an appearance on the track.

– Pierre Gasly continued his solid season with his seventh-place finish.  He sits ninth in the driver’s standings, just 13 points behind Daniel Ricciardo (105 – 92) but has been the better driver of the two.

His DNFs at Monza and Circuit of the Americas loom as reasons he has not already passed Ricciardo and there is every reason to believe he will as McLarenʻs performance has dipped and Gasly has remained more steady.  If anything is becoming apparent with the French driver, it is that Alpha Tauri has a steal with him heading their team and that it is frustrating to know that thereʻs no spot to see what he could do with an elite car.

– McLaren are on a strong fade to close out the season.  Last week in Mexico the team conceded the third spot in the constructorʻs title to Ferrari with Lando Norris finishing 10th and Daniel Ricciardo taking 12th.  This weekend, McLaren performed worse.

Ricciardo may have started seventh but by the midpoint of the race, he had parked his car and was relegated to 19th.  An issue with the power unit and its insulation caused a drop in power and the team eventually called him, perhaps in the hopes of salvaging the engine for one of the final races.

Norris started where he finished but performed a miracle recovery to get the one-point finish.  He clipped his right rear wheel on Sainzʻs Ferrari, sustaining a puncture at the start, and then limped the entirety of the circuit before pitting and rejoining the race in last.  From there, his uphill climb could only get him so far and the one point did nothing to counter Ferrariʻs strong finish.  McLaren now find themselves 31.5 points behind the Prancing Horse in the standings (287.5 – 256).

Carlos Sainz and Lando Norris would sure love an explanation on the second question as both have endured sure a penalty during the season – and at one point, both in the same race.

– This may seem like a cheap way out, but Hamilton deserves every bit of the recognition for his efforts in Sao Paulo.  In the sprint race, he drove from 20th to 5th and amazing recovery after having his qualifying time disqualified for the questionable wing infraction.

With his five-spot penalty for taking a new power unit, Hamilton then dropped from fifth to tenth to start the race.  From there, he was like a maestro with the orchestra in his control.  He drove through the field like he heard the rhythm and melody of the race and everyone else was still looking at their sheet music.  His Driver of the Day award came as both a foregone conclusion and an understatement.

Rather than go into the numerous quotes that Toto Wolff has dropped since the race ended, lets just go with his reaction after Hamiltonʻs pass, and a moment destined to be a meme.

Still, Hamilton had this to say after the race: “I mean, coming into this weekend, I never, ever thought that we’d be able to close the gap like we have today. And then these things that just kept going against us. But I think it really shows, just for everyone, just never give up whatever you’re facing.”

Verstappen seemed resigned in his assessment of the GP: “Lewis and I were fighting for position on multiple occasions, I think it was hard racing but good racing and that’s how it should be. I was hoping for a little bit more performance but this result is definitely the maximum we could do. Top speed wise it was tough to defend, you can clearly see when they take a fresh engine that it gives them a bit more power.”

Bottas may be leaving Mercedes at the end of the year but he is still aware of what the big payday is: “I thought we could have a chance of the one-stop, but we decided to do a two-stop. The team put me in a good place to take advantage of the VSC, and it fell my way for once, so I was happy with that. Overall, I’m glad we could score more points than Red Bull today – it was a positive result.

Note – Perez scored an additional point for setting the fastest lap of the race.