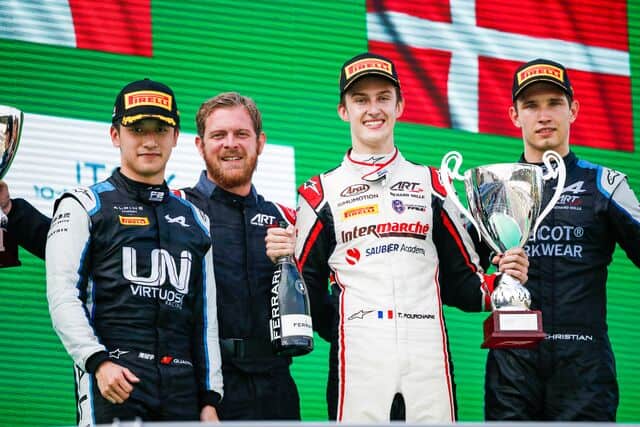 Guanyu Zhou will partner with Valtteri Bottas at Formula 1’s Alfa Romeo team for the 2022 season, the team announced on Tuesday (Nov. 16). Zhou will be the first full-time Chinese-born driver in F1.

“I dreamt from a young age of climbing as high as I can in a sport that I am passionate about and now the dream has come true,” Zhou said in a team statement.

“Now the dream is reality. I feel well prepared for the immense challenge of F1, the pinnacle of my sport, alongside a proven, world-class talent in Valtteri Bottas.”

Zhou, currently a title contender in his third consecutive F2 campaign, had been in contention for the seat for some time, albeit with some skepticism surrounding the move due to the back and forth between the team and the demands of Zhou’s team and sponsors.

Zhou’s deal is currently for one year, with Alfa Romeo remaining somewhat ambiguous on his prospects beyond 2022.

Nevertheless, it has been stressed that this contract ends Zhou’s relationship with Alpine entirely. Speaking to Motorsport.com, Alfa Romeo Team Principal Fred Vasseur emphasized the Alpine separation was critical for the new contract’s success.

“It was important for me,” Vasseur said. “I need also to be free and to work for the future. It would make no sense for me to have a one-year project if I know that for ‘23 that there is no way.”

Alfa Romeo had previously stated they would confirm their second driver for 2022 after the Sao Paulo GP and held true to their word. Zhou beat out current seat holder Antonio Giovinazzi for the job along with Zhou’s current F2 title rival, Oscar Piastri.

In recent days, Zhou’s move to the Italian team had appeared to be a done deal once the Shanghai native’s picture began appearing in the windows of Alfa Romeo dealerships throughout Shanghai.

Landed in my inbox. This image is from a Shanghai Alfa dealership. Text on the wall says "Congrats to Zhou on becoming the first Chinese F1 driver" pic.twitter.com/HV4kNZE8q2

Zhou became the second Chinese-born driver to participate in a Grand Prix weekend when he drove for Alpine in FP1 at the Austrian Grand Prix. Previously, Ma Qinqhua drove FP1 for HRT at Monza in 2012.

Zhou’s addition to the Alfa Romeo lineup means all 20 seats in F1 are currently filled for 2022, barring any last-minute surprises this coming offseason.