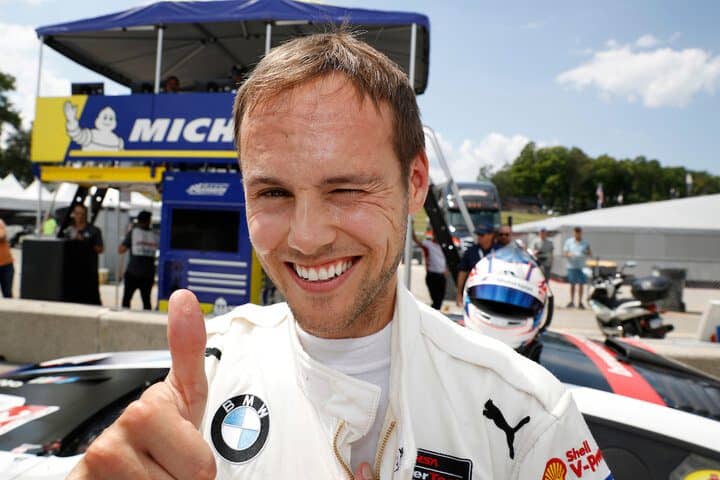 Meyer Shank Racing has wasted no time in filling their remaining full-time spot for 2022.  After announcing that Oliver Jarvis will drive for the team full-time in 2022 on Tuesday, the team announced Wednesday that the other full-time seat will be filled by Tom Blomqvist.  Together, Blomqvist and Jarvis replace 2021 full-time drivers Dane Cameron and Olivier Pla.

“I’m absolutely thrilled to be joining Meyer Shank Racing for the 2022 IMSA WeatherTech SportsCar Championship,” Blomqvist said in a statement.  “I have previous experience of racing in the States from 2019, and in prototypes from this year in the WEC, so I’m hoping to utilize that experience so we can hit the ground running next year!”

As Blomqvist noted, he spent the 2021 season racing for JOTA Sport in the FIA World Endurance Championship alongside Sean Galael (a former teammate of his from his Formula 3 days) and former McLaren racer Stoffel Vandoorne.  The trio did not win a race, but had five podium finishes (three seconds and two thirds) en route to second in the championship.

In addition to his WEC responsibilities, Blomqvist drove full-time for NIO 333 in the ABB FIA Formula E World Championship during the 2020-21 season.  Unfortunately, the season was a struggle as Blomqvist managed only six points for the entire 15-race season.  He ended up 24th in points, lowest of those who competed in every race.

Like many sports car racers these days, Blomqvist started in open wheel racing.  He finished second in the FIA Formula 3 European Championship in 2014 to current Alpine F1 driver Esteban Ocon (beating a young Max Verstappen in the process).  After that, he transitioned to full-bodied race cars, spending three years as part of BMW’s factory error in DTM.  He won one race at Oschersleben in 2015 and had a best points finish of sixth in 2016.

Blomqvist has 11 career starts in the IMSA WeatherTech SportsCar Championship, all in the former GT Le Mans class with BMW Team RLL.  Blomqvist made his debut in the 2018 Sahlen’s Six Hours at the Glen before running full-time in 2019.  He has no career victories, but has a best finish of third in class in the 2019 Motul Petit Le Mans at Michelin Raceway Road Atlanta.  He does have a class pole at Road America (pictured above).