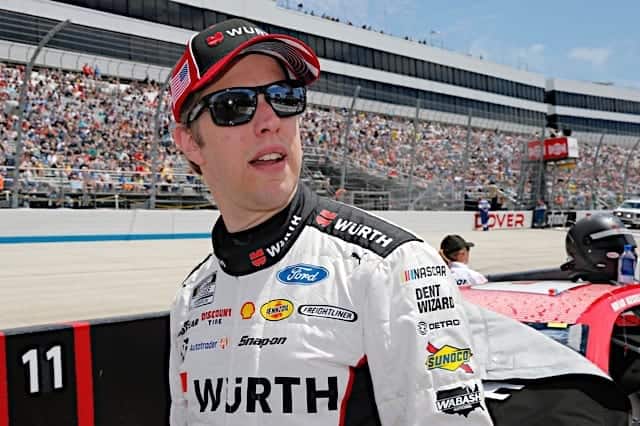 This season marked the conclusion of Brad Keselowski’s tenure at Team Penske. The event marks a turning point for a team and a driver who, regardless of what their futures hold, will forever be linked together in the eyes of the history of American stock car racing.

After a surprise victory in 2009 at Talladega Superspeedway as a part-time rookie driver, Keselowski was infamously denied a request to move up from JR Motorsports to Hendrick Motorsports, after 50-year-old wonder Mark Martin asked to be in the No. 5 car for a couple more seasons.

Before Keselowski, Penske had won 61 races at the NASCAR Cup Series level, a generous amount for a team that had only been full time at that point for 19 seasons. But five of those wins came with Mark Donohue and Bobby Allison in the 1970s driving AMC Matadors for Penske part time, and 38 had come with Rusty Wallace after Penske bought out the championship-winning Blue Max Racing team after 1990.

See also
One For the Road With Brad Keselowski

Only seven races had been won by the outfit after Wallace retired but before Keselowski signed up, and the team had just three top-15 points finishes after three drivers had finished a cumulative of 10 full-time seasons with the team in that time period. The team pinned its hopes on two big stars: Kurt Busch, the 2004 Cup champion known as much for his attitude as he was for his immense talent, and Ryan Newman, who became “The Rocket Man” by virtue of eight wins and 11 poles in 2003.

After 2003, Newman won just four more races for Penske before leaving in 2009 to join the newly formed Stewart-Haas Racing. Sam Hornish Jr. was rushed to Cup by Penske and was never able to truly develop into a great Cup driver in his career.

Busch also struggled with inconsistency in the years between Wallace and Keselowski, shown in his points finishes of 16th, seventh and 18th in 2006 to 2008. Busch was able to jump in 2009 and finish a strong fourth in points, but it was hard to call an outfit that employed David Stremme among the biggest and best organizations in Cup at the time.

Outside of Cup, Penske had started running a sporadic NASCAR Xfinity Series program from 2005 to 2008 before Justin Allgaier stepped into the No. 12 full time in 2009. The organization won nine races in that series pre-Keselowski, bringing its NASCAR total to 70 wins across all series and no driver or owner championships.

Shortly after Keselowski’s first win in 2009. the NASCAR Hall of Fame nominating committee voted on its first class. Penske, despite his NASCAR success and his rather unique history as a former track owner of venues such as Michigan International Speedway and Auto Club Speedway, was not even selected as one of the 25 initial nominees for the inaugural class of 2010.

In 2010, Keselowski struggled in his first full-time season in the NASCAR Cup Series, but helped to develop a standard of excellence for the team in NXS competition, winning six races and averaging an outstanding 5.2 finish over his full-time championship campaign. Busch was able to follow up his fourth-place finish in points with an 11th in the 2010 final season standings, while Keselowski struggled in 25th and Hornish finished a lowly 29th in his final full-time season for Penske.

Although the story of the season revolved around a resurgent Tony Stewart at SHR, Keselowski improved 20 positions in the final point standings while scoring his second and third career victories. The season was mired by Busch, however, who was fired after the final race of the season for a multitude of reasons at Homestead-Miami Speedway after not finishing the final race of the year. Keselowski, in just his third full-time season, thus became the leader at Penske the following season en route to both his own and Penske’s first Cup championship.

One common theme of both Keselowski’s championship run and his overall race strategy at Penske was to put himself on an island from other top teams. Usually it would not work, but sometimes it worked out with race wins the team otherwise would not have gotten.

In mid-2012, AJ Allmendinger was released from Penske after failing a drug test. Although Hornish subbed for Allmendinger the remainder of the season, Keselowski got his first choice the previous off-season as a teammate in 2013 and beyond: Joey Logano, Logano had entered Cup thrusted into the venerable No. 20 Toyota at Joe Gibbs Racing, replacing the legendary Stewart at the age of 18. Logano had found middling success in the four years since and was generally regarded by most fans as a bit of a bust after Martin was quoted as saying in 2005 he wanted the then tweenager to succeed him at Roush Fenway Racing.

Logano’s career turned a corner at Penske, and in the years since has reached his potential as a possible future Cup champion. There wasn’t much of a market for Logano in 2012’s silly season; I remember at the time that it was either that or a move back down to NXS with Gibbs. Now, if Logano hit the open market, he would be flooded with offers from most teams in the garage, and a lot of it has to do with Keselowski vouching for him in 2012.

Keselowski accelerating the team’s NXS program made the No. 22 Ford breeding ground for Cup-worthy talent. Although the team did have a reputation for many years for allocating too much seat time to Keselowski and Logano, all three Penske crew chiefs from this past season spent time working with that team. Keselowski may not have been the only reason for the team’s success, but he was the poster boy for the second best NXS program when it came to developing talent besides the rival Gibbs operation.

Brad Keselowski Racing was a Camping World Truck Series operation that ran for 10 seasons, from 2008 to 2017. Although the team never won a championship, some eye-popping names among alumni who were developed at BKR include two Cup drivers for Penske in 2022 (Ryan Blaney and Austin Cindric), plus other now-Cup drivers such as Tyler Reddick, Chase Briscoe and Ross Chastain.

The signing of Keselowski after the Michigander was denied a Cup ride by Hendrick Motorsports was not the best signing in NASCAR free agent history. Kyle Busch to JGR and Stewart to form SHR were more impactful to the recent history of the Cup Series.

But the 69 Cup wins (compared again to 61 pre-Keselowski), two Cup championships, 72 Xfinity wins, two Xfinity driver championships and four Xfinity owner championships in just 12 seasons turned Penske from a fringe contender to one of the main challengers to win any given NASCAR race. The organization is now one of a select few teams to have multiple championships and over 200 total NASCAR victories, a number that was just 70 when Keselowski signed in 2009. It went from a team where the hot take about it was basically “it’s a team with an owner too focused on open wheel to be consistently competitive” to a sterling gold resume.

Penske was nominated for the NASCAR Hall of Fame for the class of 2018 and was voted into the class of 2019 after one year on the ballot. And a huge part of that is thanks to the core leadership of Keselowski and the success he brought to the team even when he himself was not able to personally achieve it. That’s why, after all, the name on the building is Team Penske.

I can’t help but wonder if now, with the benefit of hindsight. That Hendrick ever regretted his decision to keep Martin for a couple more seasons. Rather than going with someone with their whole career ahead of them? I watched both Mark, & Rusty race for a couple of seasons on a short track before Mark went to ASA. He always played it safe, never taking that go for broke gamble that could have led to additional wins, a wreck, or a Championship. He was always a points racer. He was overshadowed at that time by both Larry Phillips, & Rusty. Despite being in a Phillips car.

If Rick was answering honestly, then heck yes he regretted it. I agree with your points on Mark. There is absolutely no doubt in my mind, that Jeff Gordon was telling Rick a dozen times a day, or more, WE HAVE to sign Larson.