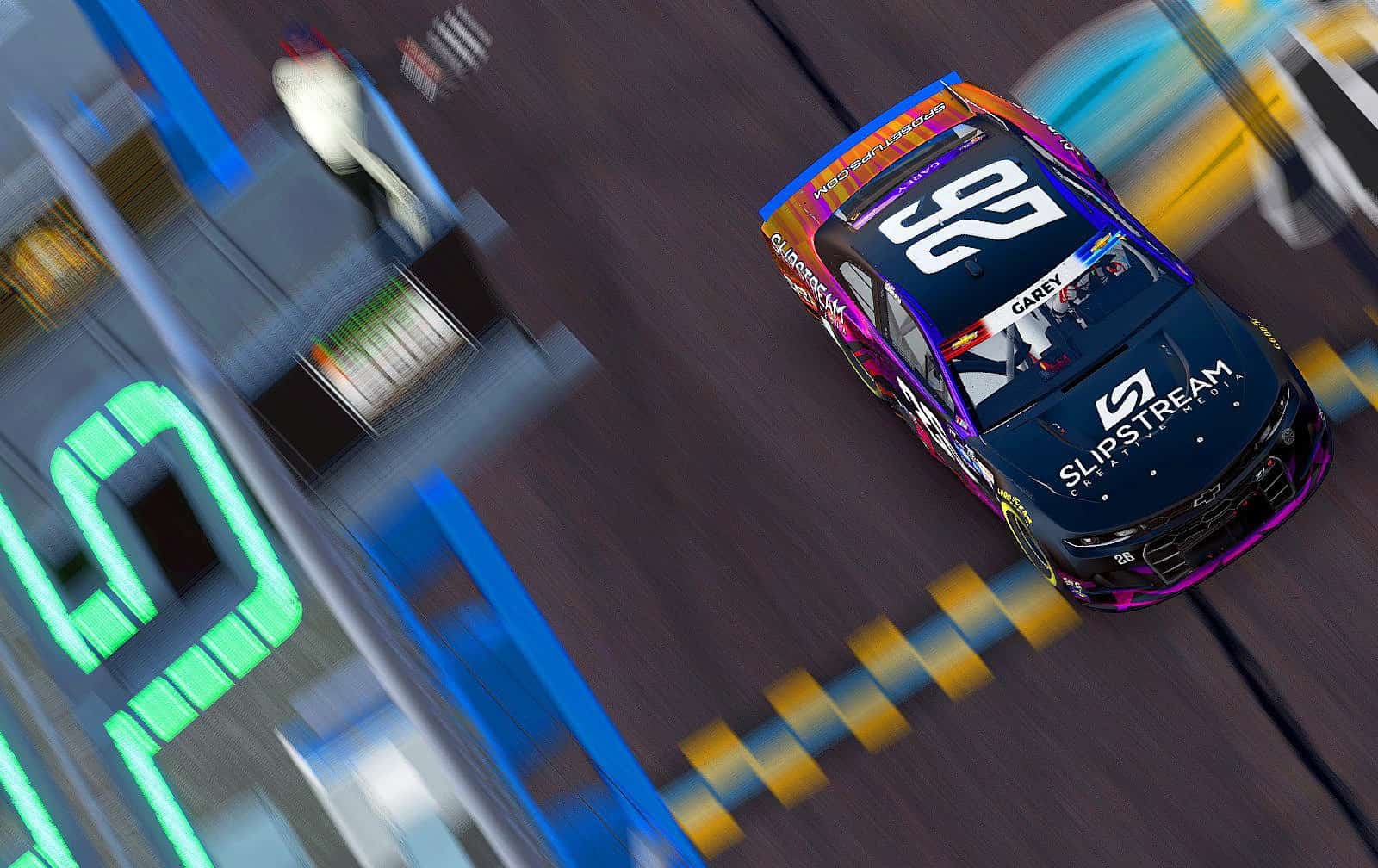 One week removed from the crowning of the 100% Cup Series champion, the other full season championship effort at FTF Racing is complete. In this week’s iRacing roundup, we’ll cover the crazy championship finale in the FTF Cup Series at Phoenix Raceway.

One race, four drivers and 200 laps would decide the 2021 FTF Cup Series championship. Kevin King and Blake Reynolds entered as favorites, tied for the most wins on the season. Michael P Frisch and Tyler Garey were underdogs, looking to do something off the cuff to steal a title.

Kevin McAdams took the pole position but it was King who took control early and often. King swept the stages, but as it is in the NASCAR Cup Series, the champion isn’t determined on points but by the highest finisher, so no stage points were awarded to the Championship 4.

With a caution in the final stage, fuel saving became a thought for all four title contenders. Frisch started saving at the start, but figured it wouldn’t work out and split the stage. Garey got into it with another car, which cost him time but put him into an alternate strategy. King and Reynolds both stayed in the top two and tried to save what they could when they realized the situation.

King ran out with only a few laps to go. Garey, who managed to save harder for longer, passed Reynolds around the same time. It stayed clean and green and Tyler Garey claimed the 2021 FTF Cup Series championship.

The @FTFRacingLeague Cup Series championship came down to the very last drops of fuel @ragtag26, @blakereynolds66 & @kkingstyle could spare with a hard-charging @PFrisch_ in the wings.#ICYMI, we've got the dramatic final 5 laps as we crowned a new FTF Champion at Phoenix. pic.twitter.com/oFP634HKri

Garey becomes the sixth different champion in seven seasons in the series. Reynolds took the runner-up, while Frisch took third overall with a fifth-place finish. The series returns in January with the Eighth Annual FTF 500.

Race no. 3 of the fourth season of Monday Night Racing presented by Rowdy Energy took the Super Late Models on the iRacing service to Michigan for a high speed, packed up racing event. In place of the previous Indy 500 events, the Michigan Late Models wound up as a double points event in Season 4.

This reporter (Justin Melillo) started on the pole position, but the lead was passed around between the likes of David Schildhouse, DJ Cummings, Max Kennon and Anthony Alfredo. Kyle Busch started back in 38th but was one of the few to make his way through the field with ease. Busch eventually got to the front of the pack where he was able to hold off the defending combo winner Preston Pardus for the victory, his first of Season 4.

After three races, Busch claimed his place in the playoffs alongside Schildhouse and Collin Fern. Rodgers and Pardus lead the charge for the drivers in the playoffs on points. Kennon is the last one in while Rajah Caruth finds himself the first one outside looking in.

The fight for the right to compete in the 2022 eNASCAR Coca-Cola iRacing Series took to the two-mile, high-speed oval in Fontana: Auto Club Speedway. Pole time went to Kyle Peddle who led the field to the start of the 100-lap event. After a tumultuous start, things finally got settled out and the lead was taken by Allen Boes.

Meanwhile, Donovan Strauss was charging to the front. Strauss caught Boes and worked for a number of laps, eventually taking the lead with 63 laps to go. The race remained green for the rest of the laps, and Strauss held on for his first career Contender Series victory.

UNBELIEVABLE. P1. Honestly don't know what to say. All the hard work has gone towards this moment. We don't stop here. @boydwayne97 is the man, he found the speed this week and we rolled with it. Proud of my team!! LETS GO BABY!!! pic.twitter.com/sE4nNePyjt

With four races remaining, the three winners on the season so far (Strauss, Parker Retzlaff, Kollin Keister) are looking good to move onward and upward into the Coke Series. As it stands, Santi Tirres and Brandon McKissic are straddling the bubble at 20th and 21st, flip-flopped depending if you consider the drop week early on or not.

Thursday night saw a doubleheader event for the second and third races of the CORE Season 4. The results of the first race would be inverted for the starting grid in the second race. With races set at 75 laps apiece, there would only be one stage in each at lap 25.

The way fuel mileage was set, running normally wouldn’t make the end of the race, but saving through the final run could result in making it the entire distance. Cosmin Ioanesiu took the pole and Michael P Frisch won the stage in the first race. When it went green again, it stayed green, and only Michael Cosey Jr. attempted to make it on gas. He didn’t, and that opened the door for Blake McCandless to take the victory.

HE'S OUT OF FUEL@windVOW8820 SPUTTERS ON THE LAST LAP AND @MrF4Speed WINS THE FIRST RACE OF THE NIGHT!

We still have one more 75-lap race to finish off tonight's doubleheader event!

More drivers were aggressive in trying to save fuel in the second race seeing how close Cosey Jr. got. While the majority of the field still made their way to pit road, Frisch held back and held on to a little extra fuel. Just like during the preseason, Frisch was able to go on and win at Iowa once again.

HE DOES IT AGAIN!@PFrisch_ masters the fuel strategy and wins the second race of tonight's ASCA Hammer Down Twin 75s! pic.twitter.com/ikBjc7WycK

After three events, this reporter sits tied atop the standings with Michael P Frisch as the series heads to Lanier National Speedway for another doubleheader event in two weeks.

Check out the broadcasts over at CORE.

HARD TO DRIVE 300 – Over 60 drivers registered for the second annual community event hosted by Bryan Blackford. Utilizing the NASCAR Car of Tomorrow from 2009 with a very slick setup on the Atlanta Motor Speedway, 43 drivers qualified for the main event, which was ultimately won by Tucker Minter.

MOONCAR 24 – Another second annual community event saw 40 teams take to Martinsville Speedway for 24 hours of racing in the Global Mazda MX5 Cup car. After 3677 laps around the paperclip, the No. 2 team (Team “Stay Away we have no practice) made up of Dylan Ault, Parker White, Bill Ault and Ryan White was able to score the victory after the Logitech G Altus Esports team that was leading with 20 minutes to go was collected in a race-ending incident.

MONDAY NIGHT RACING: Race 4 of the fourth season of Monday Night Racing presented by Rowdy Energy will bring the Global Mazda MX5 Cup to the Daytona Int’l Speedway Road Course. The broadcast will start at 8:00 p.m. ET on Podium 2.

eNASCAR Contender Series and CORE are both off this week in observance of Thanksgiving.

FTF Racing and 100% Cup Series are both in the off season.