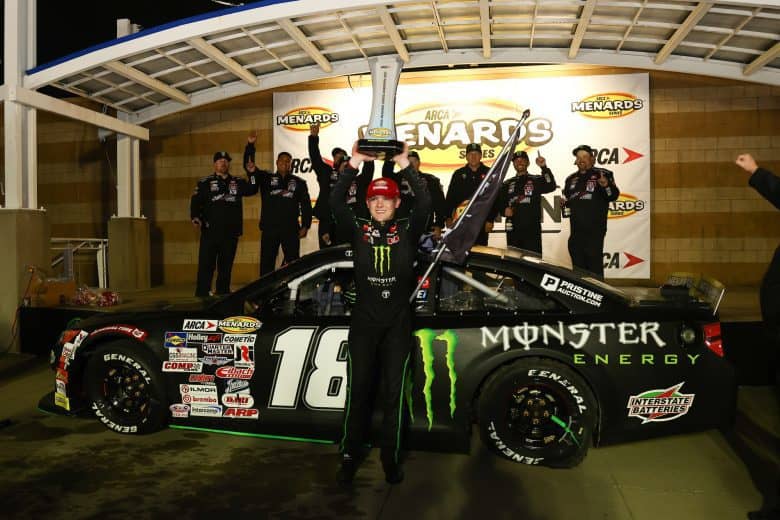 Thanks to winning half the races (10 out of 20) in the 2021 ARCA Menards Series season, Ty Gibbs became the champion, overcoming a DNF at Talladega Superspeedway that left him with a 27th-place finish to beat Corey Heim by 37 points for the title.

Gibbs became the 14th straight different champion, and it’s speculated Gibbs will move up to the NASCAR Xfinity Series next year.

Nick Sanchez, who won the season finale at Kansas Speedway, Thad Moffitt and Brad Smith rounded out the top five in points.

Aside from Gibbs absolutely dominating in all three ARCA series this year, leading the most laps in the main ARCA series and the ARCA Menards Series East and West, what were the prevailing storylines from this season? And who takes home the second annual Frontstretch ARCA awards?

In some much-needed good news for the series, the car count improved in ARCA this year. Twelve of the 20 races had at least 20 drivers compete, an uptick from nine the previous year. Furthermore, 12 teams competed in every race, an increase by one from 2020.

Conversely, the worst statistic of this year was that Gibbs and Heim were the only two drivers to compete in every race.

The COVID-19 pandemic-altered 2020 season saw 14 drivers lead laps while this year, whereas in 2021, with no alterations, there were 19 different leaders.

Still, the 19 different leaders statistic does not capture the overarching theme this year. The winning drivers did not just go to victory lane; they outright dominated races. Gibbs won 10 times and Heim won six times, 80% of the season.

Only four drivers led more than 100 laps this season. Gibbs led an astonishing 1,689 laps, Heim paced 406, Daniel Dye headed up 198 laps and Landen Lewis led 104. Dye was the class of the field for all but two laps en route to his first career ARCA win at Berlin Raceway, while in his second-ever start, Lewis led all 104 laps to win at DuQuoin State Fairgrounds.

The other two victorious drivers were Jesse Love at Salem Speedway and Sanchez at Kansas Speedway. Both took the lead from Gibbs on a late-race restart to earn their respective victories.

What is the reason for the increased car count vs. the lack of full-time drivers? At its core, money. With modified pit stops, the cost of entry to ARCA team ownership has decreased, and the series traveled to 19 different tracks, another plus for the series.

Comparatively, Berlin will pay $30,000 to the winning driver of one of its two marquee super late model events next year.

ARCA officials have made changes to the rulebook so the current NASCAR Cup Series chassis can be used in ARCA competition next year. However, no matter how much the cost of entry is lowered, unless purse sizes are increased, there will continue to be a treacherous mountain to thoroughly bolster car counts and the quality of the fields.

Racing at the half-mile Winchester Speedway had it all. There were wrecks, tempers flared, only six drivers finished on the lead lap, underdog Greg Van Alst finished a career-best second and the winning move by Gibbs came after he spun leader Heim.

As the laps wound down to the single digits, Heim led Gibbs, who was fighting hard for the lead. Heim tried to lap Moffitt, who was on the lead lap in fifth at the time. Moffitt appeared to slightly check up, forcing Heim to do likewise. Gibbs then made contact with Heim.

Gibbs certainly earned redemption after Heim previously used a bump-and-run to beat Gibbs at Elko Speedway. Gibbs’ intent is uncertain, but it fueled the rivalry between the two teenage Toyota championship contenders.

Gibbs won the race and Heim finished third. Although it was only two positions, Gibbs earned 47 points while Heim earned 44 points, indicative of how the season played out, with Gibbs slightly better than Heim.

Gibbs winning the title was not a surprise. Rather, it has been a surprise how storied his ARCA career has been when he is only 19 years old. Gibbs already is fourth all time in total wins, sixth in poles and third in laps led.

Gibbs’ 10 victories tied for the third-most in the ARCA modern record, two shy of tying it. He broke the all-time best average finish this year (third), and that includes his DNF at Talladega. He only did not lead a lap at Daytona and the two dirt track races. His combined total of those finishing positions? Eight. Without a doubt, Gibbs’ historic success earns him the breakout driver award.

What a day! Thank you everyone. All glory to God☝?? pic.twitter.com/411am7QV6K

While Gibbs racked up the statistics, Heim drove a remarkable season too. His six wins would have been the most in ARCA from 2018-2020 if it weren’t for Gibbs. Heim won at superspeedways, dirt tracks, road courses and short tracks.

WINNER! Corey dominates the @ARCA_Racing Allen Crowe 100 at the Illinois State Fairgrounds! The @VenturiniMotor No. 20 @Craftsman Camry goes to victory lane for the sixth time in 2021. [PR] #TeamToyota pic.twitter.com/C7cNmacplv

What stands out most about Heim’s season is he finished inside the top 10 in every race, ending a season-worst seventh three times. Heim finished 10 laps shy of completing every lap this season.

Heim also put himself upfront during qualifying, starting every race inside the top 10. Yes, Gibbs won the title, but Heim led the points for much of the season, and he constantly wheeled his No. 20 to challenge Gibbs.

Heim’s plans are not officially known at this time, but if he returns to ARCA competition next year, he will be an immediate favorite at every race he enters.

Disappointment of the Year

Despite finishing fourth in points, Moffitt remains winless in his ARCA career. While he set his career-best finish of third at both Phoenix Raceway and Mid-Ohio Sports Car Course, Moffitt never really contended for a victory.

Moffitt only led eight laps this year, placing him 12th on that scoreboard. Comparatively, in four starts, a quarter of Moffitt’s season, 2020 champion Bret Holmes led more laps. Chandler Smith, Tanner Gray and Chase Briscoe all made one ARCA start this year and still led more laps than Moffitt.

Moffitt’s driving also raised concerns on the racetrack. At Michigan International Speedway, his spinning of Drew Dollar collected Tim Richmond. Then at Bristol Motor Speedway, Dollar exacted revenge on Moffitt, resulting in a 25th-place DNF for the latter.

Moffitt has made 44 career main ARCA starts, more than two full seasons worth. Is he becoming the ARCA equivalent of Daniel Hemric, who just earned his first career NASCAR win by capturing the NASCAR Xfinity Series title?

Moffitt’s lack of race-winning speed, especially compared to Gray, as well as his questionable driving earns him the dubious honor of disappointment of the year.

With Gibbs seemingly headed to the Xfinity Series next year, ARCA will likely crown its 15th straight different champion. Who will it be? The drivers will first hit the race track to start the 2022 season at Daytona International Speedway on Feb. 19.