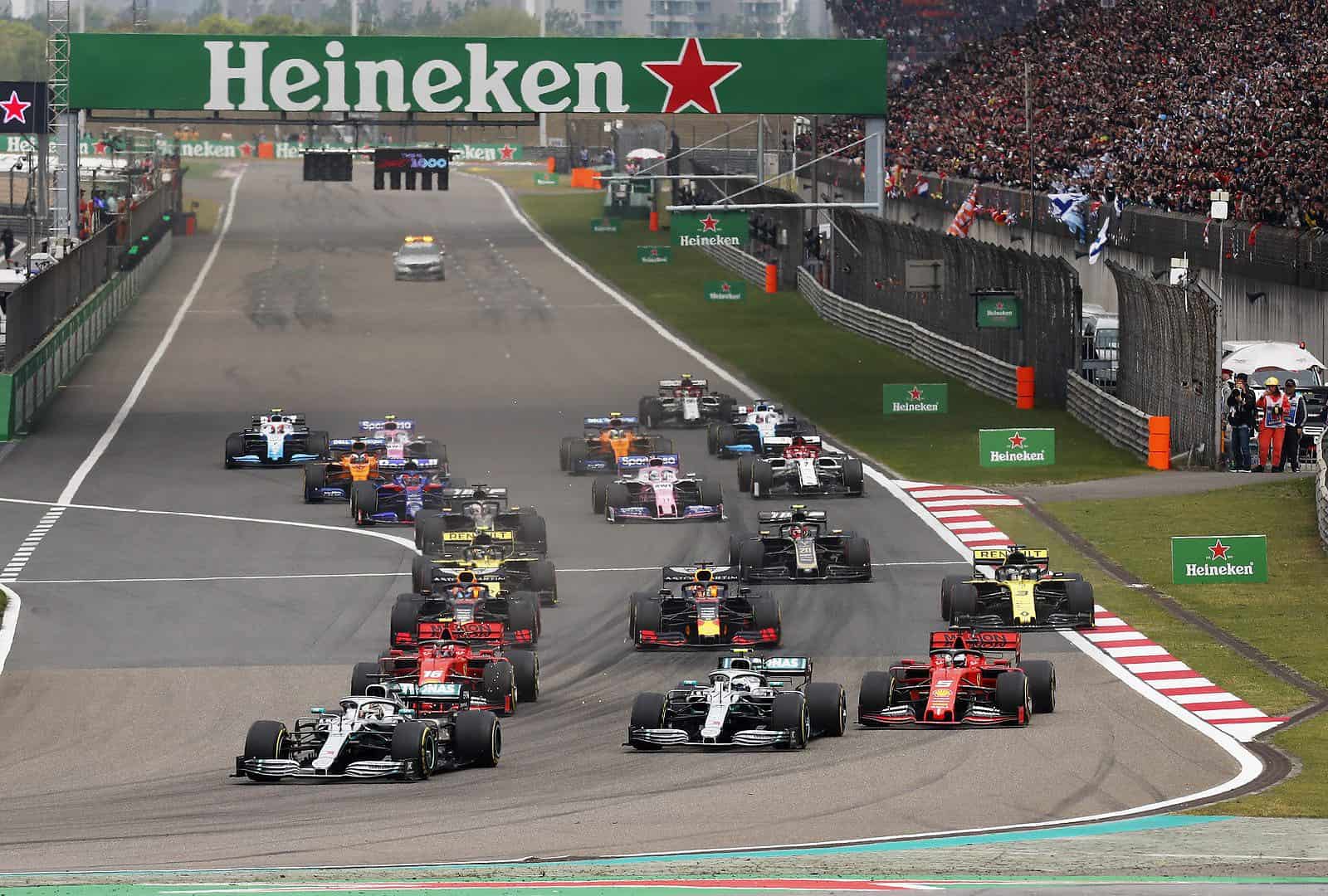 My first visit to China, in March of 2018, was a 10-day trip to Shanghai. Of those 10 days, seven were allocated to business meetings and interviews with foreigners who had founded or worked for various companies both in Shanghai and in other Chinese megacities. At that time, I had been to six NASCAR events from 2009 to 2016, but never to a Formula 1 Grand Prix. As soon as a classmate and I reached our hotel room, I began looking into how to visit the Shanghai International Circuit.

Easy enough to get to from the Pudong district of Shanghai, architecturally stunning, and much larger than TV would suggest, the circuit more or less blew me away. I was impressed by Daytona, no doubt–but something about the Shanghai Circuit simply conveyed a message of gravitas. And for a building price of $240 million, it better do just that.

After taking the $8 tour of the main grandstand, podium, race control building, and the team and drivers’ quarters, my tour guide pointed me to Shanghai International Kart World, a karting track that sits between turn seven and turns 11 through 13 section of the circuit. Her directions were short and vague but I found I essentially had free roam of the infield on my way to Kart World. Once I exited the tunnel that runs underneath turn 8, I could hear Kart World was alive and well.

I spent the next three hours sitting on a makeshift tire barrier watching young drivers, certainly less than 14 years of age, zip around the karting circuit. To this day, I know absolutely nothing of who these kids were, what series they raced in, or where any of them were headed after Shanghai. What I did note, is that the vast majority of them wore fire suits with European flags.

Of the 20 or so karting teams that were present at the time, I’m not confident in saying that more than four of them were fielding Chinese competitors. Multiple German flags, multiple Union Jacks, very little Chinese to be seen around the makeshift karting paddock. By this point, F1 had been in Shanghai for 14 years, and China’s push to broaden its international sporting presence was well underway. I couldn’t help but wonder why I didn’t see any Chinese youngsters wheeling karts onto the track? Certainly, karting isn’t cheap, but neither is Shanghai.

Doesnʻt the city that surpassed Hong Kong for the most expensive city in the world in terms of private wealth has some thirst for motorsport?

Like Guanyu Zhou, several of the Chinese talents that have advanced to the higher levels of motorsport have done so by taking the time-tested route of relocating to Europe in order to be closer to racing opportunities.

Zhou began his karting career in China at the age of eight. At 12 years old, he relocated with his family to Sheffield, England to continue karting in earnest while starting down the path to open-wheel racing.

– Former A1 GP and DTM driver Cheng Congfu karted throughout China and East Asia before making his debut in the British Formula Ford series in 2001, aged 17.

– Jiang Tengyi built a respectable karting career in China and moved his efforts to Formula BMW in 2022, also aged 17.

–Martin Cao began his open-wheel career in the 2008 Chinese Formula Ford Campus Championship and stayed put in Asia for four more years. Cao moved to the United Kingdom to contest the 2012 British Formula Renault Championship then won the 2014 British Formula 3 title and competed in the 2015 Formula 3 European Championship as well. However, Cao returned to racing in China in 2016 and has focused most of his energy on his home country since.

–Peter Li is best known for his massive airborne crash at Austria’s Red Bull Ring during round four of the 2016 FIA F3 European Championship. Li fractured the heels of both of his feet and fractured his back in four places after launching over the back of a stationary Ryan Tveter, catching 15-20 feet of air in the process.

Aged 19, however, Li also left Asia to compete in Europe. In 2013 Li joined the ranks of British Formula 3, but turned his primary focus to sports car racing in Asia following his recovery from his 2016 injuries.

– Ma Qinghua, the first Chinese driver to compete in an F1 GP weekend, likewise wasted no time making the move to Europe to further his career. Despite driving for Team China in one race during the 2005-2006 A1 GP season, Ma’s serious push through the open-wheel ranks began in the 2006 Formula Renault 2.0 Northern European Cup.

Despite competing in Formula E after his role as a full-time F1 driver with HRT for 2013 fell through, Ma’s attention continuously came back to the China Touring Car Championship, where he won the title in 2020.

Only Zhou and Ma managed to come within an arm’s length of F1. Why?

The easy answer to the question of why Chinese drivers seem to struggle in making their way to the international stage is simply that there’s no set ladder upward for single-seaters in China beyond F4. While this explanation is true, the easy answer is not sufficient.

For context, Chinese politics have always bore a streak of nationalism that can make many Western powers look pretty tame. Even in the late 1700’s when George Macartney established Great Britain’s first diplomatic mission to China, scholars could not ignore the unwillingness of the Qianlong Emperor to make any egalitarian concessions to Britain’s attempt to import a European view of international affairs into the Chinese realm.

This question has followed Chinese leadership for over two centuries: how does China engage with the rest of the world, but on its own terms?

To illustrate China’s innate desire to write its own rules, take the state of the internet in the People’s Republic. In order to access websites such as Google, Facebook, YouTube, even Wikipedia, anyone living in or traveling through China will need to use a VPN to mask their internet presence before they can access such content. The Chinese platforms that do make up for the absence of such sites, such as WeChat, Weibo, Tencent QQ, Tencent Video, and don’t forget TikTok, all come with their own ties to the countryʻs massive censorship apparatus.

However, this world-famous internet censorship infrastructure, cleverly dubbed the Great Firewall, is as much an exercise in protecting sovereignty over Chinese cyberspace as it is an attempt to restrict the flow of information at large. The Chinese state understands perfectly well that the average Chinese citizen can get around this firewall if they have 10 minutes of time to devote to the matter. More critical than restricting the flow of outside information (though that is very important, make no mistake) is not allowing a sense of Chinese identity to be wiped from the minds of more than 210 million young people by an increasingly globalized and ever more plentiful body of social media content.

How does this relate to motorsport, at all?

It does, I promise.

While China has been more than happy to partake in (and host) the Olympics and to host an F1 Grand Prix, there is always a search underway for ways by which China may rival these international institutions with a domestic product. While the Republic of China (1912-1949) competed at the Olympics once in 1932, the Republic of China hosted the Chinese National Games starting in 1910.

Following the end of the Chinese Civil War and the establishment of the People’s Republic of China, the games were reinstated, occurring every four years from 1959 onward. The opening and closing ceremonies of the National Games of China even feature the Olympic Rings. Even in an industry as internationalized as sports, China places a serious value on providing a domestic counter to whatever international institution China is flirting with.

The China Formula 4 Championship was officially launched in September of 2014. Formula Pilota China, which ran in moderate accordance with F3 regulations, only existed from 2011 to 2017. Surprisingly, China’s F4 Championship is among the older F4 leagues in existence. The United States, Southeast Asia, and Brazil all host F4 series younger than that in China. Nevertheless, seven years is not a long time.

At the surface, it would seem that moving from China F4 to the F3 Asian Championship would be a clear progression. This is where we end up in a grey area.

The world runs on politics. No country in the world gets to ignore or escape the international order. This poses a problem for not only China but Chinese athletes and organizations; especially given that the ladder invariably has ties to state-owned money and management.

As a country that has built its entire philosophy of international relations around the idea of rewriting the rules of the game in their own words, China can get split in two directions: play nice with the other countries in the international playground (F3 Asia), or create a domestic alternative to promote the China dream.

Choosing to develop motorsport in the mainland rather than diverting all energy to pitch China to the international scene may be the better option, from the Chinese Communist Party’s point of view. The simple fact is that no matter how beautiful the Shanghai International Circuit is, no matter how many TV viewers the Chinese market may offer the FIA, China will still be facing pressure from the international community to answer for its human rights and political freedom record.

What does China have to gain by further plugging itself into a world order that has been written and dominated by the US since the collapse of the Soviet Union? Why try to fit in with the international club when you have the resources for building your own massive domestic market? Or, as was the case with the National Games and the Olympics, why not do both?

Unfortunately, the inner workings and motivations of the General Administration of Sport of China are not considered worthy of being public knowledge, especially for someone writing all of this from the middle of Europe. That said, rest assured that somewhere in Beijing there is a government official rubbing their temples and pondering the way to most effectively bring Chinese racing drivers up the ladder to F1, Le Mans, and so on and so forth.

If history tells us anything, China will be moving to establish an F3 style series of its own sooner rather than later. With the furthered emphasis on nationalism and sovereignty that Xi Jinping’s administration has ushered in, this hypothetical series may put international connections on the backburner all together, in favor of developing domestic motorsport as a whole.

With the massive growth that China’s megacities have seen and the near miraculous expansion of the Chinese middle class over the past three decades, a few more FIA Grade 1 racetracks certainly isn’t a bad investment for whatever city or provincial government is craving some brownie points.

Guanyu Zhou will sit on the 2022 Formula 1 roster, that much is clear. Who the next Chinese driver to tackle F1 will be is not as straightforward. Ye Yifei and Kang Ling seem like solid candidates.

But the motorsport community at large would do well to keep an eye on China. Much like Japan’s Super Formula series has hosted several F1 journeyman, the chance is there that in fifteen years time, we may see others making a Romain Grosjean style exodus to China to continue their careers.