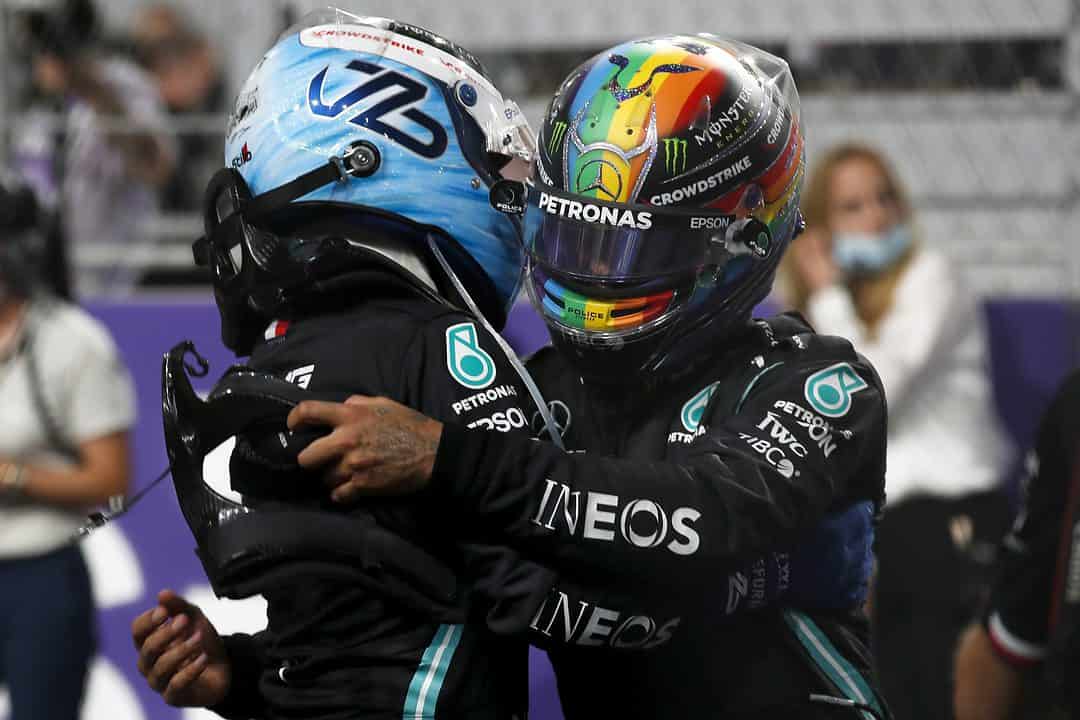 Pole position at the 2021 Saudi Arabian Grand Prix came down to the final corner. Max Verstappen had been on provisional pole, with a lap time of 1:27.653, nearly four tenths of a second up on his title rival Lewis Hamilton. As the clock wound down, Hamilton set a blistering lap time of 1:27.511, snatching pole position back from Verstappen. Still, the Red Bull driver had one more chance to take back first place. On his final lap, Verstappen was flying, pushing it to the limit and leaving zero margin for error, but on the last corner, the Dutchman locked up his front left tire, ran wide and clobbered the wall, quickly ending his opportunity to start ahead of Hamilton in Sunday’s (Dec. 5) Grand Prix.

While Verstappen aimed for the pole, Valtteri Bottas set a strong time of 1:27.622 to secure second spot on the grid. It was a fantastic end to a worrying qualifying for Bottas. As the drivers had began preparing the last flying laps of Q1, Bottas reported misfiring in his engine. He opted to enter the pits, and his car ground to a halt at the entrance to the pit lane. His engine had been replaced after a fuel leak in the third free practice session, but the team quickly got his Mercedes going again.

Things started to get tense in Q2 as the action on the track continued to ramp up. While Norris was frustrated with traffic, he set a good enough time to reach Q3, but his McLaren teammate Daniel Ricciardo could only manage 11th place. Just behind Ricciardo was Kimi Raikkonen, in the second-to-last Formula 1 race of his lengthy career. The Finnish driver was two tenths behind his teammate Giovinazzi, and both Alfa Romeos had scary moments as the session came to a close. Raikkonen tried to squeeze around Bottas on a flying lap, clipping his rear tire on the front wing of the Mercedes and almost spinning into the wall. Giovinazzi, meanwhile, did make contact with a the wall, sliding across the track and having a fairly heavy hit but not breaking the car. Williams’ George Russell finished Q2 in 13th ahead of Fernando Alonso, who couldn’t quite hook up his Alpine.

Carlos Sainz was also eliminated, finishing 15th, as the Spanish driver appeared to struggle to control his twitchy Ferrari. Early in the session, Sainz had a half spin, bouncing over the curb and brushing his rear wing against a wall, causing minor damage. Then on his final flying lap, Sainz had another off, narrowly avoiding the barriers but ruining his lap. He called the car “undriveable” on the radio.

While Russell was able to sneak his way out of Q1, placing 13th in the first qualifying session, his Williams teammate Nicholas Latifi was unable to improve on 16th. The Canadian finished the session ahead of both Aston Martins, with Sebastian Vettel qualifying 17th and Lance Stroll in 18th. It’s the first time that both Aston Martin cars have failed to make it out of Q1 this season. Rounding out the bottom of the grid, as expected, were the Haas cars of Mick Schumacher and Nikita Mazepin.

Off track, there has been a lot of controversy ahead of the first Formula 1 race weekend to be held in Saudi Arabia. Many critics have accused Formula 1 and the Middle Eastern nation of “sportswashing,” that Saudi Arabia is using the Grand Prix to spin a positive image of the country despite its history of human rights abuses. Critics point to the limited rights for women (who were only granted the ability to drive a car a few years ago), labor practices that border on slavery and the fact that Saudi Arabia still implements the death penalty, including for children, non-violent offenders and those who speak out against the kingdom.

The race has proved so controversial that even some drivers are taking action. Ahead of the race, seven-time world champion Hamilton, perhaps the most influential driver on the grid, spoke out about Formula 1’s decision to race in Saudi Arabia. “As I said at the last race [in Qatar], I feel that the sport and we are duty bound to try to help raise awareness for certain issues that we’ve seen, particularly human rights in these countries that we’re going to,” he explained.

“Do I feel comfortable here? I wouldn’t say I do,” the British driver continued. “But it’s not my choice to be here, the sport has taken the choice to be here. Whether it’s right or wrong, whilst we’re here again, I feel it’s important that we do try to raise awareness.” To that end, Hamilton is wearing a helmet with a Pride flag design to bring attention to the laws against same-sex relationships in the kingdom.

“The law, if anyone wants to take the time to read what the law is for the LGBTQ+ community, it’s pretty terrifying,” Hamilton said. Schumacher also made a gesture of solidarity with the LGBTQ+ community, posting a photo wearing a rainbow shirt and captioning it with rainbow heart emojis on the eve of the race weekend.

Four-time champion Vettel also made a stand, organizing a women-only karting race this week ahead of the Grand Prix. While Saudi Arabia did end the ban on women driving in 2018, many women still do not drive, and Vettel hoped that his race could help spark a shift in cultural attitudes. “I was trying to pass on some of my experiences in life and on track to do something together to grow their confidence,” the Aston Martin driver said. The women had a mix of driving experience and knowledge about Formula 1, and Vettel described the race as a positive experience, saying “it was a very memorable and inspiring day.”