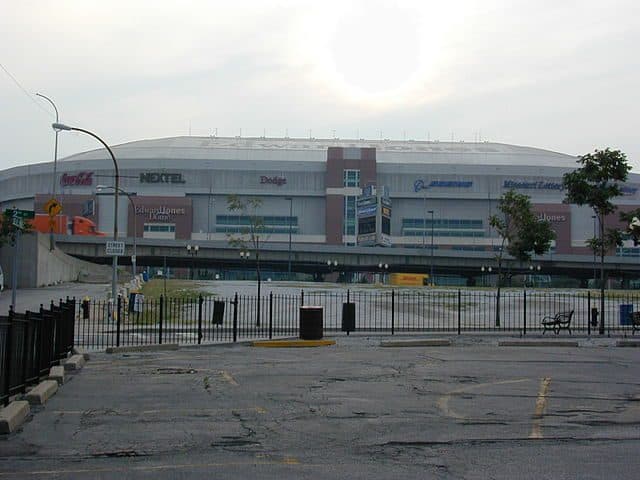 Parkersburg, W.V.’s Tyler Carpenter defended his 2019 Gateway Dirt Nationals title Saturday night in St. Louis (the 2020 edition of the race was canceled due to COVID-19 restrictions), nailing a restart with three laps to go and running away from Tanner English despite having a right-rear tire going flat in the closing laps.

The win, coupled with Carpenter’s victory in Thursday’s preliminary feature, netted the driver a $35,000 payday, plus a ride with Niece Motorsports for the 2022 Truck Series race at Knoxville. Carpenter, a driver that made headlines all weekend long with his antics on and off the track (his driving Thursday night inspired a vicious tirade from Lucas Oil Late Model Dirt Series Rookie of the Year Ricky Thornton Jr.), delivered a raw emotional interview in victory lane.

Though Carpenter and English never were challenged during the feature from their front-row starting positions, several drivers were able to make forward progress. World of Outlaws Late Model Series champion Brandon Sheppard climbed from a B-main to go from 13th to fourth in the feature, while former ARCA Racing Series winner Ryan Unzicker won hard charger honors, going from 21st to seventh.

The feature event was slowed for five yellow flags, a welcome respite after Saturday’s late model B-mains turned into a marathon of incidents.

The feature of the weekend came courtesy of the midget cars, as did the performance of the weekend. Broken Arrow, Okla.’s Jonathan Beason not only swept all three midget features at the Dome, but he went from last to first in the final 18 laps of Saturday’s feature to score a last-lap win after tangling with the lapped car of Terry Babb while leading on lap 13 of the 30-lap feature. What’s more, not only did the last-lap pass come at the expense of 2020 USAC National Midget Series champion Chris Windom… Beason made it with a broken right shock. Watch the entire reel.

2021 UMP Modified national champion Nick Hoffman won Thursday night’s preliminary modified feature, making him only the second driver in the country to my knowledge to win 40-plus features this season. More notable, though, was how strong Hoffman proved in midget competition, contending for multiple feature wins on the weekend.

He may not have been the mathematical hard charger, but between going from 13th to fourth in the super late model feature and his last-lap pass to win a B-main, it’s arguable that Brandon Sheppard was the fastest driver in the late model field. Had he not been tangled up in Thursday’s Carpenter/Thornton fiasco, Sheppard may well have broken Cinderella’s glass slipper Saturday.

One note away from the Dome as a success goes to now owner/driver Boom Briggs, who is expanding his operation to two cars for 2022 to field a ride for four-time World of Outlaws late model champion Josh Richards as reported by DirtonDirt. The team has not yet decided which tour to contest in 2022; Richards ran the full LOLMDS schedule with Clint Bowyer Racing this year, while Briggs ran the WoO circuit. That’s a major signing for Briggs, whose operation can only improve by bringing in such an accomplished racer.

No one is going to convince me otherwise that this wasn’t the paint scheme of the weekend, with Chapel Hill, Tenn.’s David Seibers carrying the colors of his wife’s social media, which include adult content listings. Not touching the moral issues with a 10-foot pole, but for the money required to run at this level of racing this truly is an untapped market.

Well, that’s one way to promote your wife’s OnlyFans…?

Supportive husband David Seibers has a unique sponsor (to say the least) on the side of his #18 Black Diamond Chassis at this weekend’s @GatewayDirt Nationals.#DirtInDecember pic.twitter.com/q0T0HH2vpL

The other side of the Beason/Windom battle for the win was that the third car involved flipped over and triggered the one-lap shootout finish. That car belonged to Pocahontas, Ill.’s Zach Daum.

As bad as Scott Bloomquist’s 2021 season has been, his Gateway Dirt Nationals may have been the worst of the bunch. Earning a front-row start for Thursday’s preliminary feature, Bloomquist wrecked his car on lap 1.

It didn’t get better. Fast forward to Saturday, and Bloomquist not only spun out on lap 1 of his B-main to trigger a four-car pileup, he pounded the wall hard enough six laps later to have to be towed off the track.

Ricky Thornton Jr. didn’t blow up on Saturday the way he did (and justifiably so) on Thursday, but the weekend didn’t improve much from the Thursday wreck he endured that forced him into a B-main. Though Thornton made the late model feature courtesy of a hard-fought B-main with Shannon Babb, the LOLMDS Rookie of the Year not only got spun out in the closing laps of the super late model feature, he was forced to retire only three laps into the modified feature with an apparent suspension failure.

There’s no debate that McKay Wenger didn’t endure the weekend’s hardest wreck, which he fortunately walked away from.

The weekend’s most brazen example of dirty driving came in Friday’s second late model B-main, when Sheffield, Ill.’s Rich Bell obliterated Robbie Stuart for the final transfer spot; Stuart would miss the feature as a result, while Bell was penalized to the rear after the event was over, and for good reason.

Watching super late models get ripped to shreds on a temporary track that has no business hosting them, I can’t help but think that the Gateway Dirt Nationals are to dirt what NASCAR’s Clash race at the LA Coliseum is going to be. Leave demolition derbies for enduro cars.

Speaking of NASCAR, this isn’t a dirt note per se, but dirt streamer Flo Racing was announced as the new home of NASCAR’s “grassroots” racing programs that were previously housed on the NBC Trackpass Service.

FloRacing and NASCAR have entered a partnership that will bring over 280 motorsports events to the FloSports Network in 2022.

To those NASCAR readers that frequent this column and aren’t familiar with Flo Racing, this is a VERY good thing for all race fans. Flo’s service is as reliable as any in racing streaming, and their turnaround to provide replays of events is as fast as anyone in the game. That means a ton, especially considering this column had to scrap covering the weekend’s Xtreme DIRTcar Series race at the I-75 Raceway because a replay is still not available on DirtVision more than 24 hours after the race ended.

For as ludicrous as some of the drivers and fans alike were behaving all weekend long, it was a welcome relief to see how proactive track officials were getting Robbie Stuart separated and calmed down after he got violently knocked out of Friday’s second late model B-main. Stuart looked every bit like he was ready to use his car as a weapon leaving the racing surface and had just cause, but between a track official on the exit ramp forcing Stuart to stop his car and another official directing Stuart to park away from the larger late model pit area under he cooled off, the officials did a best-practice level job keeping the Dome in order.

The Rams and the rest of the NFL may have abandoned the Dome a long time ago, but they left their concessions pricing behind for the Gateway Dirt Nationals patrons to deal with, with domestic beers reportedly going for $9 a pop.

This weekend saw news that not one, but two, dirt tracks will be resurrected for the 2022 season. Lucas Oil Late Model Dirt Series regular Kyle Bronson and his wife were announced to have purchased the Golden Isles Speedway, with a schedule release that plans to return weekly racing to a facility that went unused this year.

Also, Flo Racing’s Gateway Dirt Nationals broadcast reported that the closed Paducah International Speedway in Kentucky is returning and restoration work has begun, with a targeted opening date coming in May.

Where it Rated (on a scale of one to six cans with one a stinker and a six-pack an instant classic): My first time watching the Gateway Dirt Nationals was going to get one $9 Michelob Ultra. Super late models do not belong on a track this small, and the amount of down time spent between events sitting through the Flo Racing crew throwing t-shirts into the grandstand was maddening. Plus the entire shtick of the Gundakers and Tyler Carpenter acting like wrestlers in front of the mic made it impossible to take this event seriously.

Having said that, we’ll give it three overpriced beers. One extra for Carpenter’s authentic interview that was a departure from the rest of the WWE-esque weekend, and one for a midget feature that rivaled anything the Chili Bowl can offer.

Up Next: I’ve written for 49 consecutive weeks in 2021, and even though there’s a few more dirt races left to run in December, I need a few weeks of offseason. Thinkin’ Dirty will be back in 2022, and will be back up and running New Year’s Weekend with coverage of the Tulsa Shootout. Frontstretch will also be running a dirt racing awards column this coming Wednesday.

To those that have been reading all year long, thank you, and see you (very) soon. Merry Christmas to all.

I went to the very first Gateway Dirt Nations and the 3rd one as well. The 1st year was a mess but also a lot of fun. The 3rd year had its issues and improvements as well. As a local race fan, the concessions are a huge down side. Its higher then a NASCAR race! You also cant bring in outside food, and I don’t believe you can go out and come back in.

While I love Supers, they are a big powerful to be on this track. Perhaps the 602 crates would prove to be better, but they need a big time touring series car to be the headiner. The midgets seem to be the class of the field, but I feel like the Supers are the draw.

Sounds like things are still a bit disorganized with some waiting around for no good reason. The track was ROUGH in 3 and 4 this year as well. However, it does look like a blast and I may go in 2022.