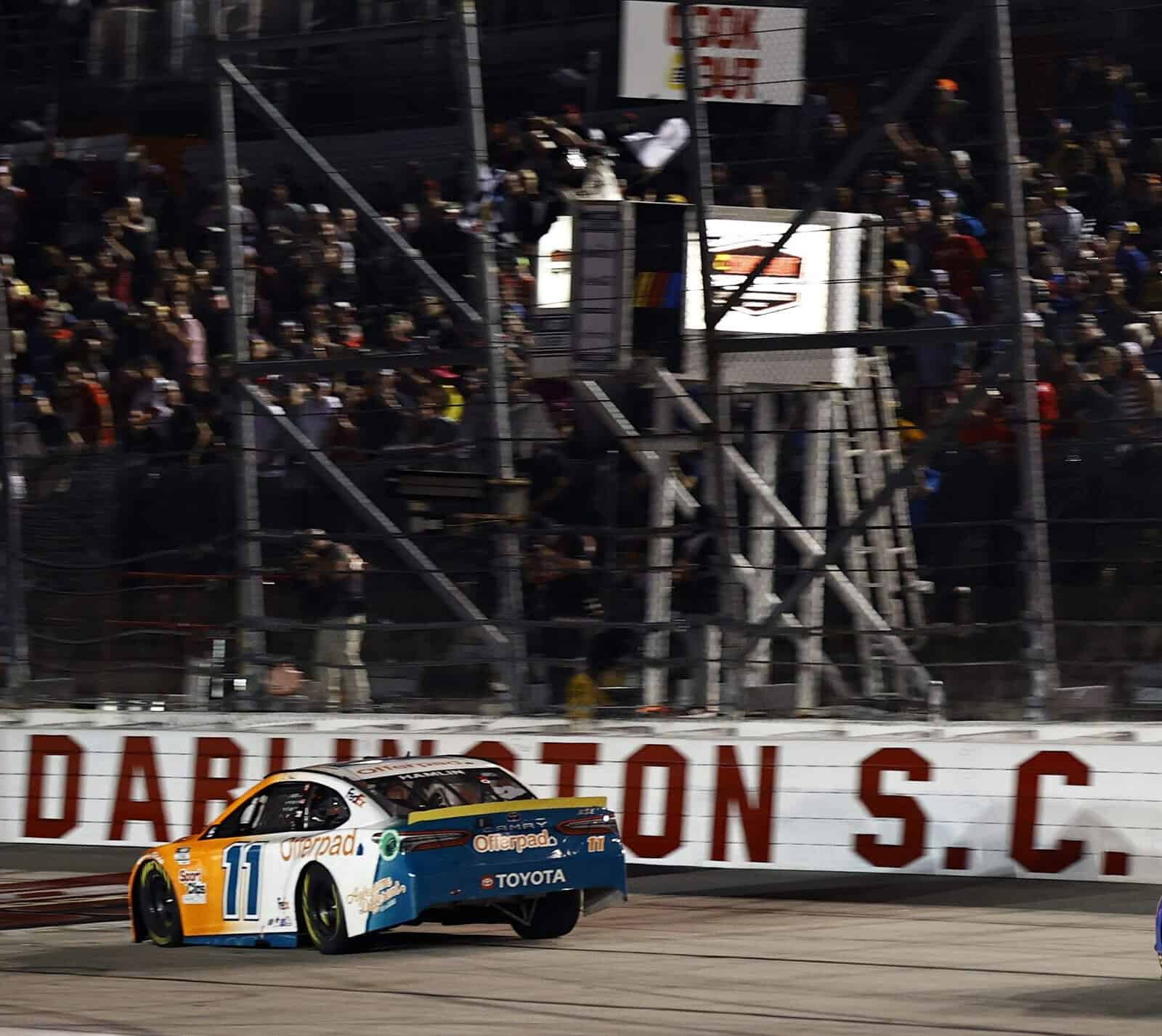 Thank you for joining us today at the Thomas Bowles Memorial Rec Hall.

We all know who won the championship, most popular driver and other accolades.

Now it’s time to shine a light on the great moments, memorable lines and awesome cars that graced us with their presence in 2021, as voted on by me.

Here are this year’s awards.

This award goes to the driver who gave us a thrilling moment all in the name of going for the win but failed in the process.

So who better to receive it than Kyle Larson?

Instead, it was Denny Hamlin who took the checkered flag. But not after an intense battle for the lead between him and Larson, which ended with Larson’s “video game” attempt to pass Hamlin in the final turn. It sent his No. 5 in a wall ride as their cars came to the checkered flag.

The Darrell Waltrip “Jaws” Award for Quote of the Year

On any given day, Chase Elliott has a … let’s call it a dry personality.

He’s not the first, second or typically even the third person you go to for a memorable quote, let alone one that winds up on a shirt design.

But following the playoff race on the Charlotte Motor Speedway road course, the culmination of his feud with Kevin Harvick and Harvick’s elimination from the playoffs, Elliott delivered.

“Our team has a lot of fight,” Elliott said. “I’m just super proud of that. As far as Kevin goes, just want to wish them a merry offseason and a happy Christmas.”

Soon, the saying was being put on holiday-themed sweaters sold by Elliott’s website.

Let’s hope we get more of this witticism from NASCAR’s most popular driver in 2022.

This award is inspired by Chris Buescher’s 2016 Cup win at Pocono Raceway. That day, the then Front Row Motorsports driver claimed his first, and so far only, Cup victory when NASCAR made the race official due to … fog.

In that spirit, this award is given to Aric Almirola and his win at New Hampshire Motor Speedway.

Not only did Almirola score the only victory for Stewart-Haas Racing in 2021, he also earned it when the race was shortened by eight laps due to darkness. It’s believed to be the first Cup shortened by darkness since the Sept. 30, 2007, race at Kansas Speedway.

The win was the third of Almirola’s Cup career and his first NASCAR win on a non-superspeedway oval. That is, of course, if you take out the fact that his official first Xfinity Series win, at the Milwaukee Mile in 2007, actually saw Hamlin in the car after he took over for Almirola mid-race.

“I honestly hated it and my wife has hated it worse than I have,” Almirola said afterward. “She’s always told me, ‘Honey, I want you to win so badly at somewhere other than a restrictor plate racetrack,’ and we did it today.”

The Sam Bass Award for Paint Scheme of the Year

In an age of one-off sponsors or corporate mandated unoriginality, paint schemes can sometimes feel like a lost art.

But every once in a while, a racecar arrives at the track with a look that catches your eye and just won’t let go.

This year, that was Brad Keselowski‘s “Tron Car.”

OK, that’s not its official name. But what else were we supposed to call the Freightliner eCascadia car Keselowski drove at New Hampshire?

If you look at this car and don’t start hearing a Daft Punk song, something’s wrong.

We might never see this scheme again, but it left an impression

.@keselowski's new paint for @NHMS adds some ⚡️ to your timeline. pic.twitter.com/13puW438wZ

That makes it official.#NASCAR #Foxwoods301

The Peter Max Award for Excellence in Paint Scheme Design

Not all NASCAR paint schemes are subtle.

And they don’t always work.

However, like Dale Earnhardt’s Peter Max-designed car for the 2000 edition of The Winston, it works just enough to live rent free in your head forever.

The winner of this award is the Ally Financial scheme Alex Bowman had for the inaugural race at Nashville Superspeedway.

What makes it even more notable is who designed it. The car was designed by Dale Earnhardt Jr. and was voted on by fans who also could have chosen a car designed by Jeff Gordon.

Trust me, it looked even better in person.

The inaugural #Ally400 @NashvilleSuperS is in the books as @Alex_Bowman wheeled the Neon Lights Chevy to a 15th-place finish. ? pic.twitter.com/vr6OvLmCxf

The “I Can’t Believe They Actually Made That” Merchandise Award, Presented by Racing Champions Diecasts Circa 1999

This award is presented to the one piece of NASCAR merchandise sold in 2021 that just really made us scratch our head.

When a raced version diecast of a car is made these days, it’s almost exclusively done for race winners.

Unless, of course, you’re Chase Elliott.

We get it, Elliott’s very popular. But is he “let’s make a raced version for his 10th-place finish in the Bristol dirt race” popular?