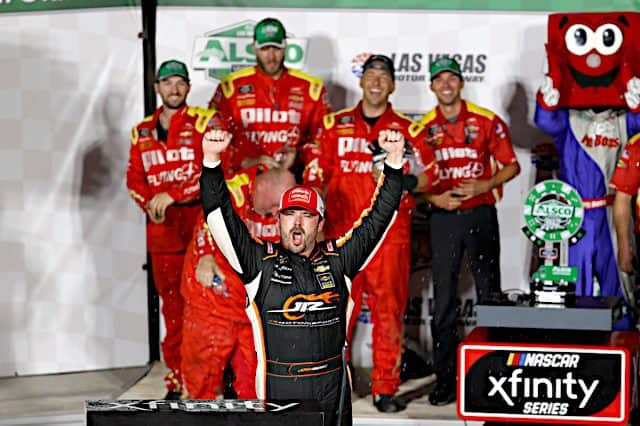 This past week, NASCAR and the Xfinity Series just celebrated another successful racing season in Nashville. It’s hard to believe the season concluded one month ago with Daniel Hemric winning the championship and his first NASCAR national series victory.

Chevrolet won its fifth straight manufacturer’s championship, following a 16-win season with eight drivers earning wins from four teams. One of which was Justin Allgaier, who was named the Most Popular Driver award for the third time in as many seasons. It’s also the 12th time a JR Motorsports driver has been honored as the most popular, and for the 10th time straight.

With some awards and not-so-awards, let’s wrap up the 2021 season here on Frontstretch. Below are six categories that help sum up the events of this season. Fair warning, some of these aren’t going to be your grandmother’s answers. Let’s start with Driver of the Year.

Driver of the Year

Berry is the Xfinity Series Driver of the Year. While he has started races in the Xfinity and Camping World Truck series in previous seasons, he had never been given an opportunity like the one presented to him by Dale Earnhardt Jr. and Kelly Earnhardt Miller. The first half of his planned stint with JR Motorsports was a sluggish start. Brilliance was shown at Phoenix Raceway, but that race came to an early end.

Then at Martinsville Speedway, Berry earned his breakthrough victory. From there the season changed dramatically in his final six starts in the No. 8 car. The win at Martinsville also guaranteed him a starting spot in any Xfinity Series race he would enter for the remainder of the season. Enter Jordan Anderson Racing.

He was tapped to drive for Anderson at Mid-Ohio Sports Car Course because there was no qualifying and he was locked in by virtue of his win at Martinsville. He scored a top-10 finish to propel JAR into the top 40 in points. He then ran four more races for Anderson’s team but scored only one more top-10 finish.

Then later in the year, he subbed for JRM teammate Michael Annett in five races, as Annett was recovering from a leg injury. Berry nearly won at Michigan International Speedway had it not been for late-race cautions. Then he earned career win number two at Las Vegas Motor Speedway.

With his talent and ability to adapt to new scenarios showing bright, Berry substituted twice for Spire Motorsports in the NASCAR Cup Series, for Justin Haley at Dover International Speedway and Corey LaJoie at Michigan. Additionally, when Rackley WAR parted ways with Timothy Peters in the Truck Series, Berry filled in for nine races.

Berry made the most of the opportunity given to him in 2021 and it propelled him to a full-time ride at JRM in 2022. That’s why he is the driver of the year over drivers like Cindric, Allmendinger or even Gibbs.

Team of the Year

This title could be reserved for an entire organization, but it’s going to a specific team. Joe Gibbs Racing won 12 races in 2021, with 11 coming from the No. 54 team – one-third of the entire season. Seven drivers strapped into the Toyota led by Chris Gayle: Ty Dillon, Ty Gibbs, Martin Truex Jr., Busch, Christopher Bell, Denny Hamlin, and John Hunter Nemechek.

The team’s success was led by Busch, who swept his NASCAR-allocated maximum of five starts by winning races at Circuit of the Americas, Texas Motor Speedway (June), Nashville Superspeedway, Road America, and Atlanta Motor Speedway (July). His victory at Nashville was the highlight of the season for this team as Busch scored his 100th victory in Xfinity Series competition.

Ty Gibbs, grandson of team owner Joe Gibbs, made his Xfinity debut at Daytona’s road course in February. In the most impressive of fashions, Gibbs won the race. He would go on to win three more times at Charlotte Motor Speedway (May), Watkins Glen International and Kansas Speedway.

The team’s other two victories were won by Bell at New Hampshire Motor Speedway and Nemechek at Texas (October). Had late-race penalties not gotten in the way, Truex and Hamlin each could have added to the win total for the No. 54 Toyota.

The only sour part of this team was the run by Dillon, which was more caused by poor luck than anything. Wrecks and freak accidents kept Dillon from scoring a single top 10 in his four races with the team.

Overall, the No. 54 car was exceptional in 2021. No other organization came close to matching the victories and success the No. 54 JGR Toyota team achieved. Don’t forget, among the four JGR full-time entries, it was the only one to reach victory lane through 32 races until Hemric won the season finale race at Phoenix.

2021 started off great for Snider, earning his first career victory at Homestead-Miami Speedway in the season’s third race. Unfortunately, that was his only win and only top five of 2021. He was able to earn a total of 11 top 10s and improved his average finish from last season by three whole positions, going from 20.6 to 17.0.

May through July was a rough stretch for Snider and the No. 2 RCR team. His average finish was 21.5, earning only two top 10s through a 14-race stretch.

When the series returned to the track at Watkins Glen in August to begin the final 14-race stretch of the season, Snider and RCR clicked off nine top-15 finishes, including six in the top 10. His average finish was better than his season-long average at 16.1.

It wasn’t the most remarkable year for Snider, but his victory secured him a place in the playoffs. He finished ninth in the final standings ahead of Jeb Burton, Riley Herbst, and Jeremy Clements. Some marks went down, but his overall running position improved. And the resilience in the final 14 races of the season following three months of lackluster results demonstrated the grit behind Snider and RCR.

Had he seen more success early in the season, he may have been asked to stay, but instead, Snider is on his way to RCR-affiliated Jordan Anderson Racing in 2022 and bringing his TaxSlayer sponsorship with him.

In 2021, Sam Hunt Racing went full-time after a part-time effort in 2020 and a single start in 2019. Driving duties were split amongst several drivers, but the team showed signs of improvement and even winning speed. In 2020, Brandon Gdovic scored the team’s best finish at the Indianapolis Motor Speedway road course – 12th. At the season opener at Daytona, Gdovic topped that best finish with an eighth-place showing.

NTT IndyCar Series youngster Santino Ferrucci made his stock car debut at Homestead-Miami with SHR and found the wall early, relegating him to 30th. But Ferrucci was no slouch behind the wheel. He made six more appearances with SHR, and all but one finish fell within 13th to 17th place. Even with the inexperience of driving a stock car, Ferrucci made the SHR Toyota look fast.

Then there was Nemechek. At Dover in May, Nemechek showed off just what SHR was capable of on the track. He started 30th but finished 10th in stage one and eighth in stage two. Sadly, a track bar failure ruined the race for Nemechek. He finished 18 laps down in 32nd — a far cry from the deserving top 10 or even top five. Fast forward to Richmond Raceway in September, and Nemechek finally got the finish the No. 26 Toyota deserved. He finished third, earning the team its first career top-five finish.

The team struggled to find the top 20 consistently and accrued nine DNFs in 35 entries (a second car was fielded at Indianapolis, and a second entry was leased from JD Motorsports at the Charlotte ROVAL). Kris Wright and Ferrucci made seven starts, with Gdovic making six and Colin Garrett making five. Ferrucci led the team with five or more starts, earning an average finish of 19.6.

I believe it’s fair to say that Sam Hunt Racing took great strides in 2021 when compared to 2020. It already has a partnership with Toyota Racing Development and, with the right driver, could be a regular top 15 contender in 2022.

Jordan Anderson Racing may have not started the season the way they had hoped, but from the time Tyler Reddick qualified the No. 31 Chevrolet fifth at COTA in May, JAR quickly found a groove. After only three races, Anderson’s team was in the top 40 in owner’s points following finishes of eighth and fifth at COTA and Charlotte by Reddick, and an eighth-place running at Mid-Ohio by Berry.

Reality began to set in on the team, but they were now in the fight. Results fell within the 15th to 30th range routinely, but strong finishes didn’t disappear completely. Berry scored a ninth place at Pocono Raceway. Anderson scored his first top 15, a 15th-place finish, at Michigan, which ended a five-race skid with finishes outside of the top 15. IndyCar veteran Sage Karam posted a 16th place finish at Bristol Motor Speedway, his maiden oval start. Dillon finished eighth at Las Vegas in a race where he led the team’s first-ever laps. One week later at Talladega, Anderson finished fifth, his first career top-five and top 10 in the Xfinity Series as a driver.

In 23 races, eight drivers accumulated 442 points for Jordan Anderson Racing, placing them 25th in the final Xfinity Series owner’s championship. Not bad for a team’s first season of competition, particularly when you stack them up against Sam Hunt Racing (23rd, 485 points) and Big Machine Racing (24th, 453 points), who started all 33 races.

Herbst didn’t light the world on fire at JGR in 2020 and didn’t do much better in 2021. He was unable to capture even glimpses of the success that Chase Briscoe achieved in the No. 98 Stewart-Haas Racing Ford in 2020. The No. 98 Ford was a favorite to win each week last season with Briscoe, while Herbst managed to lead only 57 laps. He barely made the playoffs compared to Briscoe being solidly locked.

Duplicating the success by Briscoe was always going to be a high hill to climb but he didn’t even manage to compete for a win, scoring only five top-five finishes and earning an average finish of 17.1.