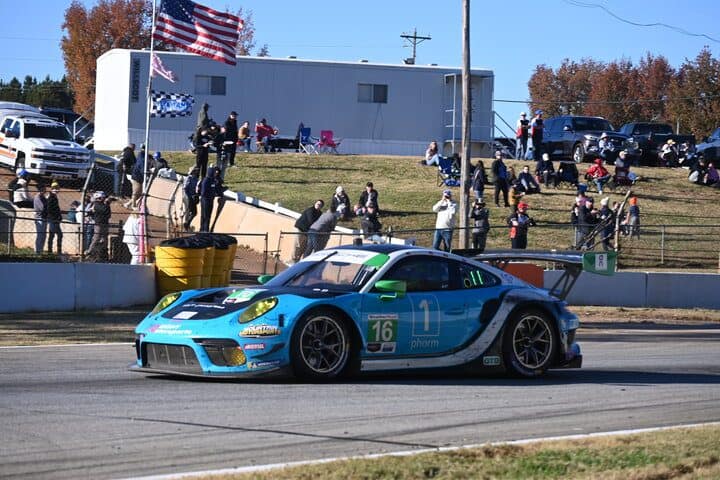 Wright Motorsports announced Tuesday (Dec. 7) that they will continue full-time in the IMSA WeatherTech SportsCar Championship’s GTD class full-time in 2022.  Ryan Hardwick and Jan Heylen, who drove most of the 2021 season together in IMSA Michelin Pilot Challenge, will share the team’s Porsche 911 GT3 R.  In addition, 2021 GT Daytona co-champion Zacharie Robichon will move over from PFAFF Motorsports to drive in the Michelin Endurance Cup events.

“I’m really excited, and I know this goes for the whole team, to continue this relationship with Ryan [Hardwick] and 1st Phorm,” Heylen said in a press release.  “We’re coming off of a strong season in GT4 with Ryan as my teammate, to now go back to a full season with Ryan in GTD.  This is something we’re all really excited about.  It’s something that as a team we’ve all worked on and looked forward to for some time.  Ryan is the guy that is making all this happen, so I’m grateful for this opportunity.”

Heylen replaces Patrick Long, who is stepping away from full-time racing.  He is taking on two substantial roles for Porsche going forward that will still provide him the opportunity to race from time to time.

Hardwick was originally supposed to do double duty in 2021, running full-time for Wright Motorsports in both the IMSA WeatherTech SportsCar Championship and IMSA Michelin Pilot Challenge.  However, in the very first practice session of the year, Hardwick crashed his Porsche Cayman GT4 Clubsport MR at Daytona International Speedway and suffered a concussion.

This forced him out of Daytona and Sebring.  Hardwick did double duty at Mid-Ohio in May upon his return, then chose to focus solely on Michelin Pilot Challenge.  He’s happy to return to the IMSA WeatherTech SportsCar Championship full-time.

“I couldn’t be more excited to be back with Wright Motorsports and back in the [No.] 16 1st Phorm Porsche GTD car for the entire 2022 IMSA WeatherTech Championship season,” Hardwick stated.  “After a major setback in Daytona to start the year, I put my entire focus squarely on our Michelin Pilot Challenge GS program, and along with my teammate Jan Heylen, we accomplished our goal of winning the team and driver championships in that series.  I’m super pumped to share the [No.] 16 car again this year with Jan Heylen, who has been by my side ever since I first drove a Porsche GT3 R at the Encore in Sebring way back in 2019.”

Hardwick’s crash in the Cayman forced the team to withdraw from Daytona.  Despite that, solid form allowed the Wright Motorsports team to stay in the championship hunt.  Late in the year, Heylen and Hardwick got on a role, winning the final three races to win the team championship and the driver’s championship for Heylen.

When Hardwick was forced to step down from the No. 16 Porsche 911 GT3 R, the team tapped Trent Hindman to replace him.  Sharing with Long, Hindman earned four podium finishes with a best run of second at Sebring.  That performance put Hindman sixth in points by himself due to missing Mid-Ohio.

Robichon comes to the team after a very successful 2021.  With teammate Laurens Vanthoor, Robichon earned four victories (Sebring, Road America. Laguna Seca and VIR) and six podium finishes en route to the championship.  The team finished strong with no finish worse than second in the final five races.

PFAFF Motorsports has not announced their plans for 2022 as of yet.  However, it appears that they will race in the new GTD Pro class that is replacing GT Le Mans.

The team did not announce a fourth driver for Daytona.  That driver will be revealed at a later date.  There was also no announcement about the team’s Michelin Pilot Challenge program.