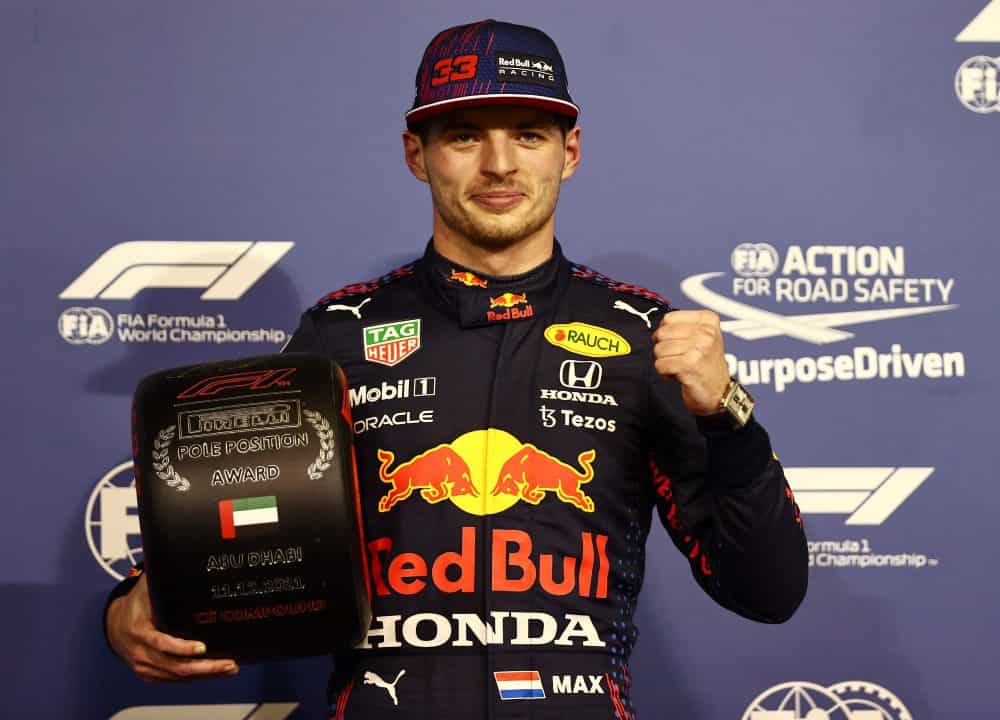 The final pole position, and possibly the championship-deciding pole position, went to Red Bull’s Max Verstappen who snatched first place by a sizable margin over his title rival Lewis Hamilton. Verstappen got the job done on his first run, picking up a slipstream from his teammate Sergio Perez and setting a blistering 1:22.109 lap time. Hamilton, who was about five tenths of a second behind on his first run, was unable to close the gap and will start the race tomorrow second. The pole sitter has won the last six races at Abu Dhabi.

Lando Norris, meanwhile, took a spectacular third place in his McLaren, with his teammate Daniel Ricciardo down in 10th. Fourth place went to Perez and the Ferrari of Carlos Sainz placed fifth, just pipping the Mercedes of Valtteri Bottas. The other Ferrari of Charles Leclerc was in seventh, just beating out Yuki Tsunoda. The Alpha Tauri driver had initially gone third fastest but had his time deleted for exceeding track limits and couldn’t go quite as quickly on his second run. Esteban Ocon in the Alpine managed to place ninth.

In Q2, Verstappen suffered a sizable lockup entering the first turn about halfway through the session, scuffing the medium tires that the Dutchman had planned to start the race on. Rather than use the slightly damaged tires in the race, Verstappen returned to track for his final flying lap on the soft tires, going quickest overall and locking in the soft tires as the rubber his Red Bull will wear at the race start. His teammate Perez also fitted the soft tire, going second overall after hovering around the elimination zone for much of the session on the mediums.

As the session came to a close, Ricciardo set a decent lap to get himself into the top 10, pushing Fernando Alonso down into 11th and eliminating the Alpine driver from qualifying. Pierre Gasly only managed 12th place after complaining earlier in the session about his braking performance in his Alpha Tauri. Thirteenth position went to Lance Stroll, the Aston Martin driver set to start his 100th Grand Prix tomorrow, and his teammate Sebastian Vettel was down in 15th. Sandwiched between the two Aston Martins was Antonio Giovinazzi in his final race for Alfa Romeo.

With around six minutes left in Q1, Mick Schumacher took a slightly-too-tight line into the final corner, clipping a bollard and knocking it into the air. The bollard landed on the exit curb and seconds later it was collected by Norris, sending it skyward yet again and bringing out the red flag. When the on-track action resumed, it became a battle between the Aston Martins, Williams, Alfa Romeos and Haas cars to get out of the elimination zone.

As the drivers completed their final laps, Nicholas Latifi initially jumped up to 15th, but was quickly pushed out by Stroll, finishing the session in 16th. Still, it represented the second occasion that Latifi out-qualified his teammate George Russell on outright pace, with Russell unable to hook up the tires, placing 17th. Kimi Raikkonen didn’t even attempt a final flying lap, bailing out early into the pits, leaving him in 18th place. Predictably, the two Haas cars occupied the final two spots of the grid, with Schumacher in 19th and Nikita Mazepin down in 20th.

In other news this week, Formula 1 announced that a deal had been reached with promotor Abu Dhabi Motorsports Management to keep the Abu Dhabi Grand Prix on the calendar through the end of the 2030 season. This is the latest contract renewal for a race in the Middle East—Qatar will return to the lineup in 2023 to begin a 10-year contact on a new purpose-built track and the Saudi Arabia Grand Prix will be held for the second time next season.

Abu Dhabi is not a terrible track and the changes made for 2021 have received praise from the drivers. There was agreement that the updated track was more fun to drive, with Hamilton describing it as “flowing.” Sunday’s Grand Prix will be a good test of whether the changes also improves the racing spectacle, but given that the track designers removed slow, single-filed sections and replaced them with longer straights and braking zones, it would not be a surprise if the redesign brought more passing.

While Abu Dhabi does have potential and a decent amount of history in the sport — with the first race being held in the city in 2009 — it does mean that there will be one fewer spot on the calendar for the truly legendary tracks from Europe. There are several iconic circuits that F1 could return to — like the Nurburgring and Hockenheimring — but space is limited in the already crowded calendar that has ballooned to 23 races for next season. But if the track changes prove successful for boosting overtaking, the Abu Dhabi Grand Prix extension will be a win for the sport.