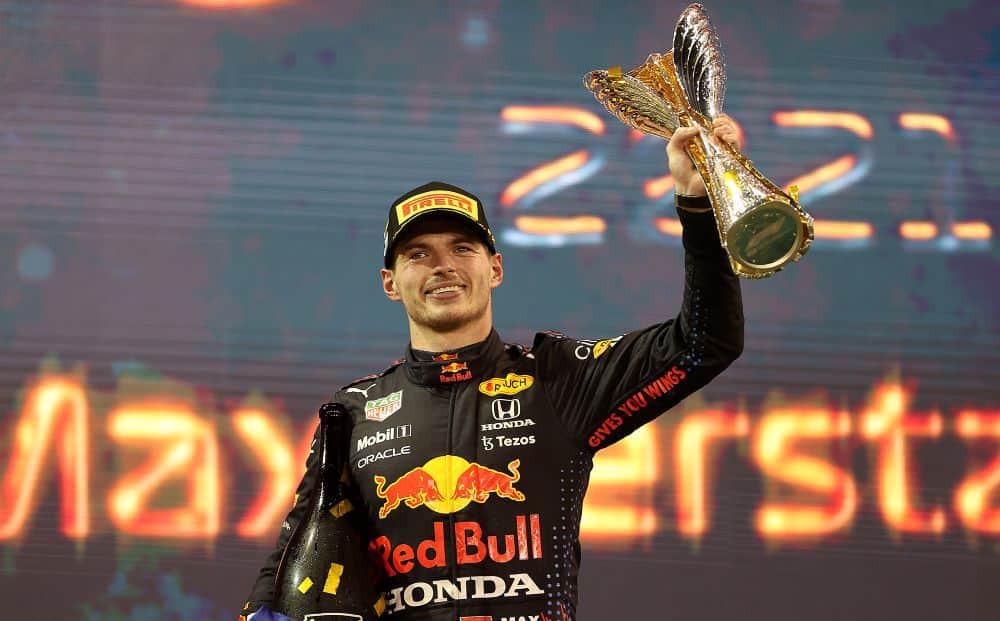 All season long Lewis Hamilton and Max Verstappen have been at each others throats for this world championship.

From a tense battle at the season opening race Bahrain to incidents at Imola, Britain, Jeddah, Brazil and Italy, Formula 1’s best season ever came to an exhilarating end for one driver and a crushing defeat for another. With the Yas Marina Circuit playing host to F1’s first tied points battle in nearly 40 years, the two drivers knew whoever crossed the line ahead of the others would win the title.

Following a one-lap dash to the finish after a safety car, Verstappen passed Hamilton on the final lap to win the Abu Dhabi Grand Prix and his first World Driver’s Championship. Hamilton, who dominated the race, came up one position short of his record-breaking eighth title. Carlos Sainz completed the podium following a late DNF of Sergio Perez.

Mercedes fans do have one thing to be happy about, as the Silver Arrows claimed their eighth straight World Constructors Title by a margin of only 28 points.

Kimi Raikkonen sadly retired from his last-ever grand prix; the Iceman made 348 race starts since 2002 and will leave the sport. Raikkonen joined his teammate Antonio Giovanazzi, who will be joining Formula E in 2022, George Russell, Nicholas Latifi and Perez as the race’s five retirements.

Nikita Mazepin was forced to sit out after testing positive for COVID-19 prior to the Grand Prix.

Off the start, pole sitter Verstappen got a shocking start which allowed Hamilton to blast on ahead. Verstappen caught Hamilton in turn 6 and made a lunge to pass the Mercedes. Forcing Hamilton off track, the Red Bull pit was up in arms after the Stewards decided not to have Hamilton yield the spot back.

Controversy already and the first lap wasn’t even completed yet.

With Mercedes having the speed advantage, Red Bull got creative on its pit strategy. Bringing in Verstappen on lap 14, leaving Perez out to hold up Hamilton. Perez understood the assignment. Putting a fight with Hamilton that allowed Verstappen to close in by nearly three seconds, the gap stood at over one second after Hamilton made his way around the Mexican.

On lap 27, Raikkonen’s career in F1 came to an abrupt end. To the tears of fans across the world, Raikkonen slid into the barriers in turn 6 and was forced to retire with faulty brakes. His teammate Giovanazzi brought out the Virtual Safety Car on lap 35, and Verstappen and Perez both got free pit stops.

With the laps winding down, Verstappen needed a miracle to win the title. The racing gods heard and answered his prayers, as on lap 53 Latifi crashed into the guard rail to force a full safety car. Verstappen pitted for soft tyres, while Hamilton stayed out banking on the race ending under yellow flags.

The FIA made the call for essentially, if you will, a green-white-checkered finish.

That extraordinary final lap of the 2021 title race in full ?#AbuDhabiGP ?? #F1 pic.twitter.com/kknTMDfpAF

The lapped cars were allowed to pass, making Hamilton a sitting duck for Verstappen on fresh soft tyres. Hamilton did everything he could be Verstappen got past, claiming his first title and ending the streak of  eight straight championships for Mercedes.

Mercedes has launched a post race protest to the FIA following the Grand Prix.

BREAKING: Mercedes have protested "against the classification established at the end of the Competition", relating to alleged breaches of Articles 48.8 and 48.12 of the FIA Sporting Regulations#AbuDhabiGP ?? #F1 pic.twitter.com/bO6BLN8lv5

It’s just insane. My goal when I was little was to become a Formula 1 driver,” Verstappen said. “You hope for wins, podiums, to hear the Dutch National Anthem. And now to be here, as world champion, with my Dad here. My family, my friends, the one’s who pushed me to be better — they are all here.

For Hamilton, although he didn’t win the title the British driver still had many positives to look back on during the season.

“Firstly, a big congratulations to Max and his team,” Hamilton said. “I think we did an amazing job this year, we worked so hard. We gave it everything, we never gave up and that’s the most important thing.”

With the Formula 1 season now at a close, fans will anxiously await the start of the 2022 season at Bahrain. Next year will see new regulations and new cars, possibly the grounds for a new team to take over as the dominant car or maybe the cars will be more evenly matched on race day.

They should of had Green, White, Checker finish.