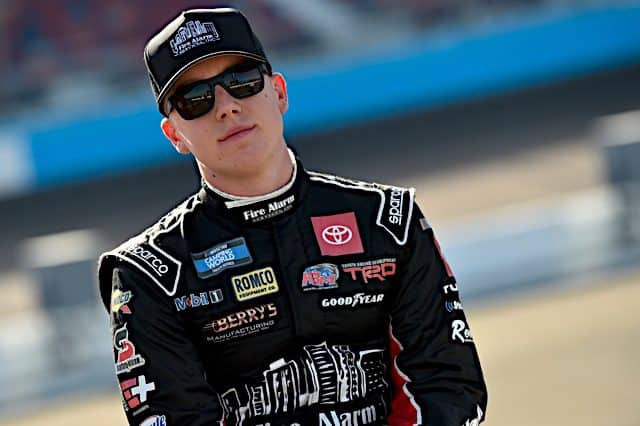 “I began my Xfinity Series career with NEMCO and I’ve had a long-running relationship with Joe and the Nemechek family, so it’s cool to see things come full circle with being able to sign John Hunter to race at KBM,” team owner Kyle Busch said at the time. “John Hunter is a proven winner in the Camping World Truck Series, as well as the Xfinity Series, and someone who we are confident will be able to put the No. 4 Tundra up front on a consistent basis and compete for victories each and every race.”

Piloting the No. 4 Toyota vacated by Raphael Lessard, who had just one win and a 12th-place finish in the championship standings during the 2020 season, Nemechek stepped into KBM as the veteran with the organization.

Nemechek’s main reason for dropping back to the Truck Series was the opportunity to race for a team that would put him in a position to fight for the win each week.

And win is exactly what he did.

After finishes of seventh and third at Daytona International Speedway and the track’s road course configuration to start the season, Nemechek snagged his first win of the year at Las Vegas Motor Speedway.

That victory was the first of five on the season and when he took the top spot in the championship standings. With wins at Richmond Raceway, Charlotte Motor Speedway, Texas Motor Speedway and Pocono Raceway, Nemechek handily won the regular season championship by nearly 100 points over Austin Hill. He also took with him 15 playoff points to add to the 34 he’d accumulated throughout the regular season with nine stage wins and five victories.

Nemechek had to be the championship favorite, right?

The playoffs didn’t start all that well for the No. 4 team, which suffered a brake rotor failure at World Wide Technology Raceway at Gateway and ended with Nemechek 22nd, five laps down. But the accumulated playoff points, combined with finishes of second and third at Darlington Raceway and Bristol Motor Speedway, respectively, allowed him to easily move forward into the Round of 8.

Once again, the next round in the playoffs didn’t start off well. Despite having a win at Vegas earlier in the season, Nemechek walked away from the mile-and-a-half with a 33rd-place finish after completing just 85 of the scheduled 133 laps. After starting on the pole and leading the first 33 circuits, Nemechek slowed dramatically on the track with what was initially thought to be a flat tire. The problem turned out to be a loss of power with little explanation and the issue was significant enough that the No. 4 drew the yellow twice after slowing on the track.

The good news, though, was that repairing the truck and finishing the race almost 50 laps down still put Nemechek in a position to finish ahead of a couple of other playoff contenders who faced issues.

The following week at Talladega Superspeedway was one all of the playoff teams wanted to just make it through without causing major harm to their spot in the championship battle. Somehow, Nemechek managed to avoid the carnage in a race that saw the Big One involve 21 of the 28 trucks that were running at the time. And in a chaotic overtime finish, he led the field but contact with Tate Fogleman opened the door for the rookie and left Nemechek fourth.

The following week at Martinsville Speedway was almost equally as tense as Talladega had been. Wins by Fogleman and Christian Eckes during the Round of 8 meant the shortest track on the circuit set the Championship 4, with none of the playoff drivers locked in prior to the race.

And that’s where things got rather tense for the No. 4 team. A lap-131 incident with Austin Wayne Self sent Nemechek hard into the outside wall and straight to the garage with a dismal 39th-place finish.

What many assumed was an automatic Championship 4 berth suddenly hinged on what happened to the other seven playoff drivers that remained. An eventual win by Zane Smith, who had been below the cut line entering the race, left Nemechek with just a four-point advantage over Sheldon Creed, who was the first driver to miss the final round of the playoffs. The No. 4 team barely remained alive to fight for a championship.

Once Phoenix Raceway rolled around the following week, qualifying returned for such an important race and Nemechek started 16th. But on lap 1, things went south when contact with Jack Wood led to more contact with Kris Wright. The result was a flat tire and an unscheduled pit stop that left Nemechek two laps down with a championship seemingly out of reach.

The No. 4 team repaired the truck and the speed remained solid, but Nemechek was stuck off of the lead lap. And with just two cautions for incidents outside of the stage breaks, it wasn’t until a lap-102 caution gave Nemechek his second free pass and a shot to race down the leaders.

The final 45-lap green flag run just wasn’t long enough to make up the ground needed to win the title. Nemechek ended up seventh overall and third in the championship standings.

“I’ve gotten asked the question of, is this year a failure if we didn’t win the championship,” Nemechek told Frontstretch after the race. “Now that I’m there, no, it wasn’t a failure. We had speed all year. We were one of the favorites every single week. So no, it doesn’t surprise me that we had one of the best trucks tonight. I feel like (Kyle Busch Motorsports) has been strong here. This is one of my best racetracks. (Crew chief) Eric Phillips has been really strong here.”

Despite the disappointment, Nemechek will return to KBM in 2022 with the same purpose he had in 2021: win races and a championship.