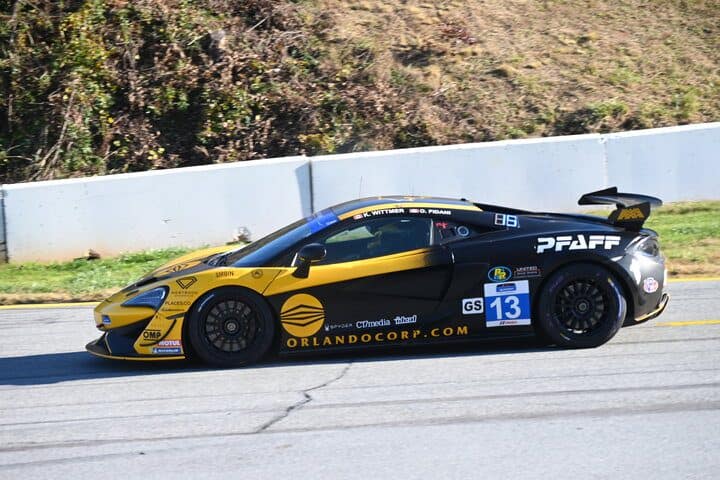 Andrew Wotjeczko Autosport (AWA) announced Tuesday (Dec. 14) that they will move up to full-time competition in the IMSA WeatherTech SportsCar Championship in 2022.  The team will race the No. 13 Duqueine-M30-Do8-Nissan in the LMP3 class.  Orey Fidani and Kuno Wittmer, who drove the team’s McLaren 570S GT4 in IMSA Michelin Pilot Challenge in 2021, will drive full-time.

Fidani and Wittmer will be joined by Lars Kern for the four Michelin Endurance Cup events.  For the Rolex 24 at Daytona, Matt Bell will join the organization as well.

“LMP3 cars are fast, enjoyable machines,” explained team owner Andrew Wojteczko.  “The LMP3 class has no Balance of Performance (BoP), and it is more economical than GT Daytona (GTD).  It is a competitive class with expectations of significant growth in coming seasons.  To make the switch to LMP3 was a logical progression for our team.”

Wittmer and Fidani have raced together as teammates since the beginning of 2020.  The team was planning to run full-time in 2020, but the COVID-19 pandemic prevented that.  The team is Toronto-based and the border between the United States and Canada closing to non-essential travel rendered competing in IMSA without a base in the United States impossible.   As a result, the team was forced to sit out the remainder of the season after starting the season-opening BMW Endurance Challenge at Daytona.

For 2021, the team re-united and ran full-time again.  The results came immediately as Wittmer and Fidani teamed up to win the season-opener at Daytona.

Fidani missed the round at Mid-Ohio at May when his wife was about to give birth to his first child.  Chris Green drove with Wittmer in his place and helped to claim the team’s second win of the year.

Outside of the victories, much of the season for AWA was actually quite lean.  Wittmer and Fidani ended up with a series of disappointing finishes.  A third-place finish last month at Michelin Raceway Road Atlanta allowed Wittmer to finish fifth in Grand Sport points.  Fidani was 11th due to his missed race.

“I am extremely delighted on being back in the WeatherTech Championship,” Wittmer said in a press release.  “Having joined AWA in late 2019, the connection with the team and co-driver Orey Fidani has been an incredible adventure so far.  We [have] had the chance to test the LMP3 at Canadian Tire Motorsport
Park a couple times and we all fell in love with it.  Orey is an absolute gentleman [and] friend and I value his driving skills highly.  Also, I’m very happy to have Lars [Kern] and Matt [Bell] onboard, as we know their capabilities in the series.”

Wittmer has 25 career starts in the IMSA WeatherTech SportsCar Championship, but none since the 2018 Mobil 1 12 Hours of Sebring.  He has not run full-time in the series since 2014, when he was full-time in the GT Le Mans class as part of SRT Motorsports and won the class championship in a SRT Viper GTS-R.  In those 25 starts, Wittmer has four career class victories.  The last of those came in the 2017 Motul Petit Le Mans for BMW Team RLL.  Fidani will be making his series debut.

Kern comes to AWA after having a long relationship with Porsche.  For the past three years, Kern has served as an endurance driver for PFAFF Motorsports, which is another team that originally entered IMSA from a Toronto base.  In 10 career starts, Kern has one class victory, which came at Sebring back in March.  He also has two additional podium finishes at Michelin Raceway Road Atlanta.

Bell comes to the team after running a part-time IMSA WeatherTech SportsCar Championship schedule in 2021 with WIN Autosport.  He drove in the Rolex 24 at Daytona in the team’s ORECA 07-Gibson in the LMP2 class, finishing fifth in class.  At Sebring and Michelin Raceway Road Atlanta, Bell drove the team’s No. 83 Ligier JS P320-Nissan in the LMP3 class.

EDITOR’S NOTE: There are actually two different sports car racers named Matt Bell.  One is from the United States and has raced off and on in IMSA competition over the years.  He also made three starts in the Xfinity Series, most recently at Mid-Ohio for DGM Racing in 2017.  The other Matt Bell is from England.  His recent experience has been centered around LMP3 cars, with which he won the 2020 IMSA Prototype Challenge championship with K2R Motorsports alongside Naveen Rao.  This article originally included the American Matt Bell instead of the English Matt Bell in the car.

In addition to the team’s full-time IMSA WeatherTech SportsCar Championship, AWA will run a full-time car in the five-race IMSA Prototype Challenge series.  That car will driven by Anthony Mantella in his return to sports car racing after many years away.  Mantella previously competed in what was then the Continental Tire SportsCar Challenge with his own operation, Mantella Autosport.