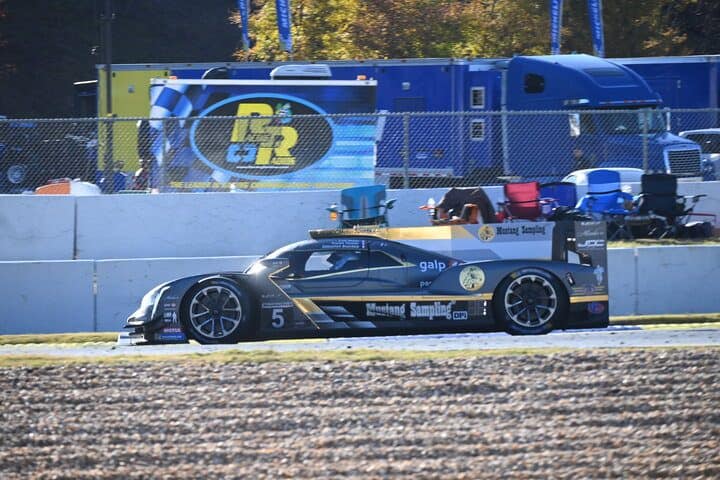 JDC-Miller MotorSports announced Tuesday (Dec. 14) that they will have a new driver lineup for the 2022 IMSA WeatherTech SportsCar Championship season.  Former Ford GT factory driver Richard Westbrook will join Tristan Vautier in the No. 5 Mustang Sampling-sponsored Cadillac DPi-V.R.  Loic Duval, who drove full-time alongside Vautier in 2021, will return to the team for the endurance events.  Finally, Ben Keating will step up to the DPi class for the first time at the Rolex 24 at Daytona in January.

“I’m really excited to be back in IMSA for 2021 and to be joining JDC-Miller MotorSports in the Cadillac DPi-V.R.,” Westbrook said in a press release.  “I’ve been in contact with John ever since my GTLM program ended in 2019 and we both were keen to work together when the opportunity was right.

“I’m just so happy we finally did it and grateful to John and the entire team and partners for believing in me and I’ll do whatever it takes to help take this team move forward into 2022 after they had some strong races last year,” Westbrook continued.  “Last time I raced in the top class in IMSA, we narrowly missed out on the title going into Petit Le Mans in 2015, so I feel I have a lot of unfinished business to take care of and I can’t wait to get going at the ROAR [Before the 24] in January.”

Westbrook comes to JDC-Miller MotorSports after running a limited schedule over the past two years.  He did not race in IMSA at all in 2020, then was tapped to drive for TF Sport in the Rolex 24 at Daytona in the GT Daytona class in an Aston Martin Vantage GT3.  He would finish seventh in class.

In the FIA World Endurance Championship, Westbrook drove in the final two races of the 2019-20 season for Aston Martin Racing.  At Le Mans, he finished third in the GTE-Pro class with Nicki Thiim and Marco Sorensen.  At Bahrain, Westbrook was pressed into service in the second car after Alex Lynn tested positive for COVID-19.  There, Westbrook finished fourth in class.

Vautier and Duval finished sixth in DPi points in 2021.  Much of the season was a struggle for the Minnesota-based team, but they did have one highlight.  That was when Sebastien Bourdais dragged the Cadillac to overall victory at Sebring in March despite a partially detached rear wing.

Bourdais was previously announced as a full-time driver for Chip Ganassi Racing in 2022, which allows Duval to slide into the endurance role.

Even though Keating is considered to be an amateur driver, he is not shy behind the wheel and welcomes his first shot at the DPi class.

“I am extremely excited to be running with JDC-Miller MotorSports for the 2022 Rolex 24 Hours [at Daytona],” Keating said in a press release.  “I have absolutely loved racing the LMP2 in IMSA for 2021, and to have the opportunity to drive in the top class of DPi and have a shot at an overall win is a dream come true.  I have high expectations for myself and with the lineup of Tristan [Vautier], Loïc [Duval] and Richard [Westbrook], we for sure are a candidate for the overall win.  The JDC-Miller MotorSports team has proven it can win at this top level, and they always seem to be quick at Daytona.”

Keating comes to JDC-Miller MotorSports after spending the 2021 season racing full-time in multiple series.  Keating drove full-time in the LMP2 class for PR1 Mathiasen Motorsports, scoring three victories (a fourth at Michelin Raceway Road Atlanta was taken away due to a post-race penalty) and claimed the LMP2 championship with Mikkel Jensen.  He also drove for TF Sport in the Rolex 24 at Daytona alongside Westbrook.

In addition to his IMSA schedule, Keating also raced full-time in the FIA World Endurance Championship’s GTE-Am class for TF Sport.  Alongside Felipe Fraga and Dylan Pereira, Keating scored a class win in the six-hour race in Bahrain.  A DNF in the final race of the season dropped the team back to second in points.