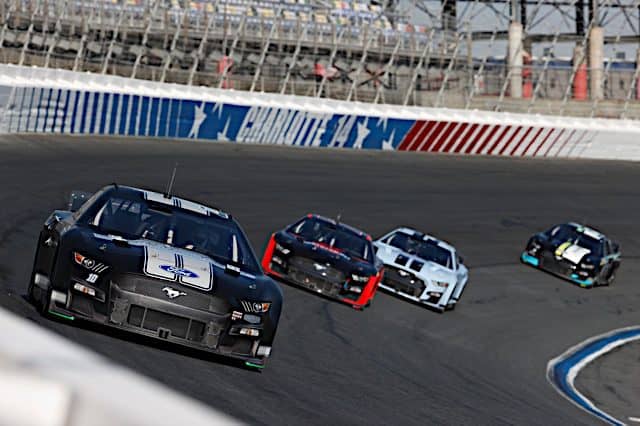 On Nov. 5, NASCAR’s plans for the Next Gen car and its rules packages for 2022 were seemingly set in stone.

As championship weekend in Phoenix came to life, President Steve Phelps publicly reaffirmed the sanctioning body would run the 670 HP package at all road courses and oval tracks smaller than 1.5 miles.

All other intermediate ovals (Charlotte, Texas, Pocono, Homestead, Kansas, Michigan, Auto Club, Atlanta), which host almost 1/3rd of points races on the schedule plus the All-Star Race, would see the 550 HP package based on the much maligned one used over the last four years with the Gen 6 car.

“Optically what do you see?” Phelps said. “Do you think the racing is good or not? Our fan council data would suggest the answer is yes. Is there a vocal minority that says that they don’t like a 550 horsepower package, they want to see 750 plus? Absolutely.

“I would go back past kind of the optics test or the I test, I would go to the data. The data suggests we have better racing right now than we’ve had arguably ever. … What we’re trying to do is we’re trying to look at the number of people who are saying, the maximum number of people who are saying, I really like that, give them more of what they’re getting.

“I think we’ve responded frankly to what the fans have had to say.”

Data is a funny thing (especially when it’s taken from a fan survey with questions seemingly designed to get the answer you want).

Prior to October, NASCAR had conducted just three multi-car Next Gen tests on oval tracks larger than 1.3-miles: in November and January with Kurt Busch and Martin Truex Jr. at Charlotte Motor Speedway and an eight-car test at Daytona in mid-September.

The first 2+ car test on an intermediate track came on Oct. 12 at Charlotte and coincided with the initial announcement about the 2022 rules package.

What’s happened in the 43 days since Phelp’s comments in Phoenix?

Windtunnel tests, a handful of multi-car outings at Charlotte including two organizational tests complete with short mock races, plus public feedback from drivers asking for the 670 HP package across the board (outside superspeedways) and meetings with manufacturers.

Plenty of data that doesn’t come from restart optics or a curated fan council.

Then came Friday’s (Dec. 17) Charlotte test, 51 days before the Clash at the L.A. Coliseum and 73 days before the first intermediate race weekend of 2022 at the 2-mile Auto Club Speedway.

NASCAR’s Executive Vice President and Chief Racing Development Officer, Steve O’Donnell, announced that apparently NASCAR didn’t like what it had been seeing.

“I would say we’re more than likely going with (670 HP) across all of our tracks (except Daytona, Talladega and Atlanta),” O’Donnell said.

Your eyes aren’t playing tricks on you.

“I think the simple factor is how much drag is built into this car,” O’Donnell said in comparing the two different packages. “When you look at a 550 package, to produce some of the similar results you saw (in this week’s test) the horsepower levels would have to be so low that we just don’t think it’s the right move at this point. You can certainly go out there and run 550.

“But from what we’ve seen in comparison to 550 to 670, we lean more towards 670. Certainly a little bit more spread out when you restart a race, but with the tire wear and what Goodyear’s been able to do, what you’re seeing is kind of like comers and goers that we used to have in racing, the ability to kind of maintain speeds, and at this point is just getting the drivers to a comfort level where you can run two-wide, we have the ability to pass and where we don’t have that wake that’s so noticeable in the past.”

Part of the reason NASCAR was devoted to the 550 package in the run-up to the Next Gen debut was the hope of attracting a new manufacturer into the sport. At this point we’ve been given no definitive indication that’s happening anytime soon.

“If we go 670, that’s absolutely within a range to attract a new OEM,” O’Donnell said. “We’ve had discussions with a number of new OEMs and factors within that. So that wouldn’t be a detriment to someone coming into the sport. … We’ve still got kind of a few boxes to check post test here where we get together with our OEMs and and the teams can just confirm that’s the direction we want to go with. But everything we’ve seen so far, that tells us that’s the the horsepower we want to target and go with.”

Read that last set of paragraphs. Then remember the last four years

Four years of “we like what we’re seeing.” Four years of citing fan council data. Four years of a package that, save for races at Pocono, Las Vegas and Kansas in warm weather, produced miserable competition on intermediate tracks.

Four years of NASCAR stating the exact opposite of what was said on Friday.

All of that went out the window in the middle of December, just under 60 days until the Next Gen car makes a real competitive lap.

As Yahoo! Sports Nick Bromberg noted Friday, this is occurring after the Next Gen project was delayed a year due to Covid-19.

Even now, the car NASCAR has its future staked on isn’t locked-in just yet.

Friday’s test included sessions devoted to multiple car setups. The first was with a 6-inch spoiler offset to the right with a bigger rear window fin. The second session, after O’Donnell’s presser, included a 6-inch spoiler centered with a regular fin. The last had a centered 4-inch spoiler.

NASCAR’s managing director of aerodynamics and vehicle performance, Dr. Eric Jacuzzi, said the sanctioning body was “95% there” and expected a final package to be selected “early next week.”

Based on driver feedback, things to be moving in an appealing direction.

But who knows what Auto Club Speedway will bring? A lot can happen in 73 days.

Keselowski: “We liked everything today just some more than others. … I’m pretty excited about it because the cars are significantly more difficult to drive. … If you make a mistake, the penalty is huge. … The 4-inch felt like it was 2005 Cup cars.”

Logano said he liked the 4-inch spoiler the best, considering there was a time they were three-wide. He said tire falloff/strategy also could come into play.

Has Phelps just been spouting the company line. The fans were quite vocal they didn’t like the 550, as were the drivers. So who is this “everyone loves it ” that Phelps is talking about. Does anyone know who is calling the shots in Nascar ! Please tell me if someone does. The leaders of Nascar are a joke, moving from one fiasco to another, and not actually listening to the fans or the drivers. What’s next, stay tuned.

Maybe someone finally said “You can’t do that” and the reply wasn’t “YOU’RE FIRED!!!!”

“So who is this “everyone loves it ” that Phelps is talking about.”?

Must be the same 50 people that asked for The Chase.

If Brian asked 1000 people if they liked the chase and ONE said they did, Brian would say. “See! Everyone loves MY idea of the chase.”

NASCAR is just the another company taken over by socialist liberals. remember liberals destroy everything they touch, sadly that will be NASCAR’s fate.