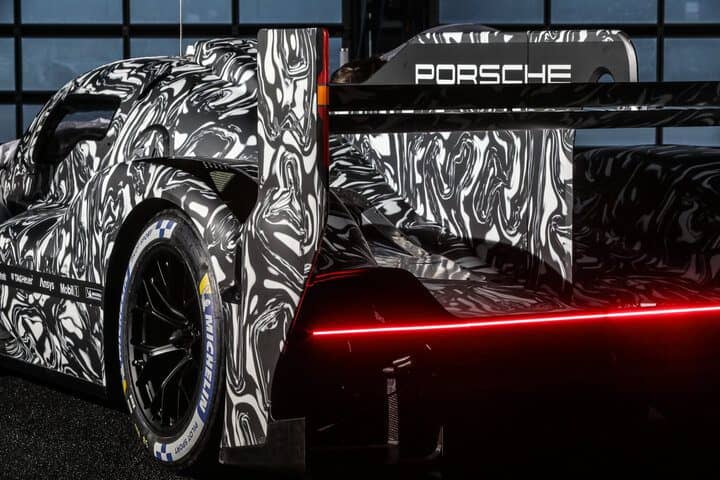 The biggest of these announcements is that 2021 IMSA WeatherTech SportsCar Championship co-champion Felipe Nasr and Dane Cameron will be the first two factory drivers for Porsche’s new LMDh entry with Penske Porsche Racing, set to debut in the 2023 Rolex 24 at Daytona.  In addition, the factory provided the first peek at their new LMDh prototype (pictured above).  It still does not officially have a name.

Neither Cameron nor Nasr will compete full-time in IMSA in 2022.  Instead, the two drivers will be part of the intensive development process for the car.  According to Porsche, the testing program is set to begin in January.  They will have a full year of testing ahead of the car’s maiden race.

Porsche is the first of the six manufacturers currently committed to the LMDh platform to unveil even a disguised look at their new car.  The others that are planning to begin racing in 2023 (BMW, Acura, Audi and Cadillac) have only released artists’ renderings of their cars, or nothing at all to this point.

An additional announcement will see PFAFF Motorsports, 2021 champions in the IMSA WeatherTech SportsCar Championship’s GT Daytona class, move into the GTD Pro class for 2022.  The championship-winning pairing of Zacharie Robichon and Laurens Vanthoor will not be retained.  Instead, Porsche factory drivers Matt Campbell and Mathieu Jaminet will drive the No. 9 Porsche 911 GT3 R full-time.  In addition, Nasr has been confirmed as the team’s third driver for the four Michelin Endurance Cup races.

Campbell and Jaminet come to PFAFF Motorsports after driving part-time schedules for WeatherTech Racing in the GT Le Mans alongside Cooper MacNeil in 2021.  Campbell is also a known quantity to the team, having made two previous starts for the team in endurance races.

PFAFF Motorsports’ 2021 drivers have different plans for 2022.  Robichon is currently only signed to race in the Michelin Endurance Cup races for Wright Motorsports in their Porsche.

Lars Kern, who served as the team’s endurance driver, will continue in such a role in 2022.  That will be with Andrew Wojteczko Autosport (AWA), which is moving up into the IMSA WeatherTech SportsCar Championship’s LMP3 class.

Vanthoor currently does not have a ride for 2022.  He’s happy for his time with the Canadian-based team, but appears to be returning to Europe for now.

I won’t be part anymore of @pfaffmotorsport in @IMSA in 2022. I had awesome years in USA, times I’ll never forget. But it’s time for a new chapter in 2022. More soon..

During the Night of Champions, one of the biggest awards handed out is the Porsche Cup.  This is an award that goes to a driver that displays excellence in Porsche equipment.  Anyone who races for a Porsche customer team is eligible.  By virtue of his performances in the IMSA WeatherTech SportsCar Championship, IMSA Michelin Pilot Challenge and SRO America’s Fanatec GT World Challenge America Powered by AWS for Wright Motorsports, the award went to Jan Heylen.

Heylen won the Michelin Pilot Challenge’s Grand Sport championship solo after missing the first race of the season following Ryan Hardwick destroying a car in the first practice session of the year and suffering a concussion.  The crash forced the team to withdraw from the season opener.  Heylen finished the season with three consecutive victories in order to claim the title.  He also had three second-place finishes and a third at Lime Rock in nine starts.   In WeatherTech, he was the endurance driver for Wright Motorsports, scoring a second-place finish at Sebring.

"We're in a Bit of a New Era Now" Chase Elliott on His Past Performance at Charlotte
YouTube Video VVVkeXhzNzJmRnF5MmZVZ2FoMi1fQkd3LkJwSncxRmxfelJV
Load More... Subscribe
Sign up for the Frontstretch Newsletter