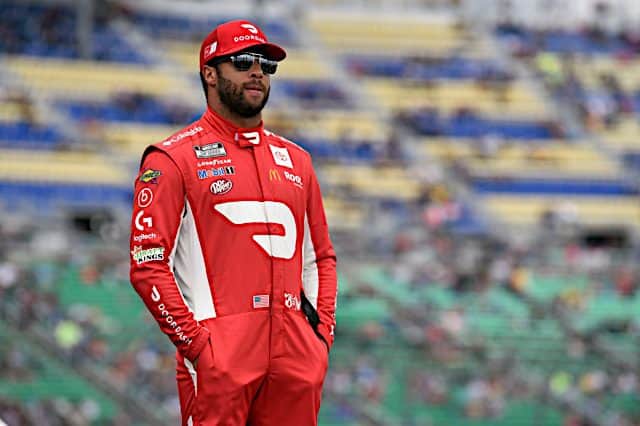 Entering the 2021 NASCAR Cup Series season, one of the biggest stories in the series was the formation of 23XI Racing, the new team co-owned by Michael Jordan and Denny Hamlin.

The idea of Hamlin launching his own race team wasn’t necessarily farfetched.  Roping Jordan into the deal was a little more surprising, but not as much as you’d think.  After all, this isn’t even Jordan’s first go-round owning a race team.  It is the first time he’s owned a race team that raced vehicles with four wheels, though.

The announcement of Bubba Wallace as the driver for the team did put a lot a pressure on him, if for no other reason due to Jordan being in the fold.  Jordan is well known as being quite possibly the most competitive player in NBA history.  His drive to succeed and the mentality that resulted is legendary.  As we found out in The Last Dance, it doesn’t take very much to motivate him.  If he feels slighted, there will be heck to pay.

Prior to the season, Jordan indicated that he expected the best out of Wallace, although it also seemed that he may have been a bit naïve as to what to expect for a startup team.  In practice, Jordan wasn’t the most visible owner in the series, but he did attend a few races during the season.

In addition to Jordan’s involvement, 23XI was basically going to take the role once held by the now-defunct Furniture Row Racing and later Leavine Family Racing as the primary satellite organization to Joe Gibbs Racing.  As a result, Wallace would get much better equipment than he ever had at Richard Petty Motorsports.  The pressure would be on to perform.

Wallace was able to bring a decent amount of sponsorship to the team with him from Richard Petty Motorsports, including DoorDash, McDonalds and Columbia Sportswear.  Dr. Pepper, Root Insurance and DraftKings completed the outside backing, along with Toyota itself.

Overall, what did the better equipment result in for Wallace in 2021?  Only marginal improvement from 2020.  He finished 21st in points and had only three top-10 finishes all season, a decrease.  Then again, all three of those top 10s were top fives, a career best.

Wallace’s 2021 season will be best remembered for his victory at Talladega Superspeedway. The YellaWood 500 seemed to work out for Wallace like a number of races at Daytona International Speedway and Talladega have in the past.  You didn’t see a lot of Wallace during the race, but he was lurking, sizing himself up for a good charge late in the event.

Of course, in order to do that at all at Talladega, you have to be able to avoid the shenanigans.  Wallace did a good job to not write off his McDonalds Toyota.  On lap 98, he was running mid-pack when Alex Bowman spun and went hard into the wall in turn 3, collecting a number of others.  Wallace was just able to avoid the spinning cars of Bowman and Ross Chastain.

Once the race restarted from that crash, a sense of urgency set in since the skies were starting to darken.  It was at that point that Wallace made his move to get to the front.  He got there on lap 113, passing his soon-to-be-teammate Kurt Busch.  Shortly afterward, Ryan Preece got turned into the wall in a similar fashion to Bowman to bring out another yellow.

The race was eventually called due to rain, with Wallace emerging the winner.

Wallace’s victory was the first victory in the Cup Series for a Black driver since Wendell Scott’s victory at Raceway Park in Jacksonville, Fla., in 1963.

See also
History Is Made With Bubba Wallace's Triumph

For now, Wallace is largely going to be treated like Derrike Cope in regards to his win. Cope earned his first career victory when Dale Earnhardt ran over debris on the final lap and cut his right rear tire in the 1990 Daytona 500.  To this day, the victory is considered to be something along the lines of a fluke.

The Talladega win will be far from sufficient to silence the haters, and Wallace has more than his share of haters.  He’ll have to earn more victories to silence those that think he doesn’t deserve his ride.

Despite the victory, the season was a struggle.  His first top 10 of the year didn’t come until race No. 19 at Pocono in late June.

There were a lot of races where the team was simply just there.  It really didn’t distinguish themselves much, especially early in the year.

What seemed to improve its fortunes was the elevation of Robert “Bootie” Barker to the top of the pit box starting at Bristol Motor Speedway in September.  The remainder of the season from there was generally pretty solid aside from the two DNFs due to wrecks (Texas Motor Speedway and Phoenix Raceway).

For 2022, 23XI will expand to two cars.  Wallace will remain in the No. 23 with expanded backing from McDonalds.  Barker will remain as Wallace’s crew chief as well.  The aforementioned Busch will drive the new No. 45 Toyota with Monster Energy sponsorship (McDonalds will be on Busch’s car as well).

Busch brings a veteran presence to the team that is sorely needed.  Wallace will be able to bounce information off of Busch.  The hope is that the information sharing will make both teams better.

In the long run, the confidence from getting back to victory lane for the first time in four years will definitely help Wallace.  He just needs to build on what he did in 2021.  Twenty-first in points should be considered something of a floor for the No. 23 team.  If he can improve on his performances, he’ll successfully shut up the haters that think he doesn’t belong in the series and continue to build something with 23XI.

Bubba! The gift that keeps on giving. I’ll bet he tells everyone he has Wheaties for breakfast. I wonder if he has a box in his mansion?

Fans aren’t critical of Bubba because he showed them more personality. We are critical of him because the revelation has exposed him as a man of low character – in the vein of Smollett. It’s not complicated. By going all in and perpetuating a demonstrably false racist trope, he effectively called us all racists. He could have taken the honest but personally less lucrative path and simply told the truth, but he chose differently $$$. And sorry but he isn’t special in terms of drivers that occupy a seat for reasons other than driving talent and accomplishment, and fan noise on that subject has always been equal opportunity.

I get the Smollett analogy and it’s apt to a point, but to truly be in the same league he would have had to tie the noose himself or pay someone to do it.

Sad how far behind mist NASCAR fans are.